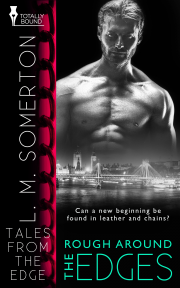 Rough Around the Edges

Customer & Industry Reviews of Rough Around the Edges

Share what you thought about Rough Around the Edges and earn reward points.

This book is an introduction to the D/s lifestyle, but there is an addition that keeps it from being just a textbook, which would be boring. Oh, no, Ms. Somerton is too good an author to do that to her readers. There are bad guys, some of whom may or may not be working together, bullets, knives, fistfights, peril and rescues. In other words, plenty of excitement in addition to the hot as hell sex scenes. This series is best read in order but if you want to jump in with #5 I don’t think there would be harm in that. You would just miss some of the backstories, which you will then feel compelled to read the previous books anyway. So, if you are new to the series, go ahead and start at the beginning. If you know this series and haven’t read #5 yet, you are going to love it.

Another very steamy, funny, and adorable addition to the series. Lu, you're amazing, and I love each of your men. Kai is the perfect blend of naive innocence, and cheeky insubordination, just dying to be punished. Harry is sexy beyond belief, another strong Dom wanting to love and protect his sub. Yowza, almost makes me wonder. Nah. I think I'd be the Domme. *grins* Anyway, if you haven't read this series, drop what you're doing and go get it. Right. Now. You won't regret it, I promise! If you're already invested in the Edge and The Underground, then don't miss this installment. It's drool-worthy.

Harry and Kai make such an incredible Dom/Sub pair. I love how Harry is so patient with Kai and how Kai is so eager to learn. The sexual chemistry between the two is off the charts. Their journey was fairly realistic, which I appreciated. It wasn’t that Kai was just dumped into the scene because he was curious. Harry took his time to teach, guide and eventually, the relationship progressed.

The sex…HOLY COW! I love how Harry takes charge – his Dom juju made my heart beat faster.

When Harry agrees to train Kai it is with the understanding that there will be no sex involved. This proves difficult for both men who even after only a few days are feeling a lot more than just attraction to each other. Kai is left full of wonder for the way he is left feeling when he submits to Harry and Harry quickly comes to cherish everything Kai offers. I’ve really enjoyed the whole series.
Showing Books 1 to 6 (of 6)