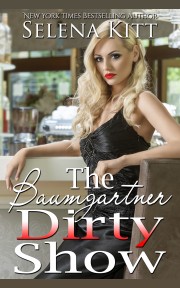 In The Dirty Show, those familiar with the Baumgartner series will recognize Janie and Josh, although now they are ten years into their marriage. This sexually adventurous couple has found a way to honor their desires while still maintaining their loving commitment to each other, giving a whole new meaning to the word ÃƒÂ¢Ã¢â€šÂ¬Ã…â€œmonogamy!ÃƒÂ¢Ã¢â€šÂ¬Ã‚Â


You donÃƒÂ¢Ã¢â€šÂ¬Ã¢â€žÂ¢t have to read any of the Baumgartner books to enjoy this deliciously sexy addition to the series!

Share what you thought about The Baumgartner Dirty Show and earn reward points.