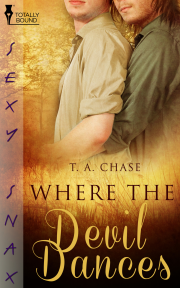 Where the Devil Dances

Falling in love with David isn't the smartest thing for Eric to do, when a madman stalks Eric's every move.

Scars aren't always on the outside. Architect Eric Sandel is living proof. He moves to Morley after surviving a terrible fire in order to rebuild his life and hopes designing the new Opera House will help him bury the past.

Firefighter David Browdie hasn't had time for serious relationships; his 'on call' status tends to leave relationships in the dust. When he meets Eric at the neighborhood dog park, sparks fly and he thinks maybe this time, serious will win after all.

But a demon from Eric's past haunts him. David and Eric must work together to find a way to stop the madman before they all go up in flames.

Reader Advisory: This book was previously released at another publisher. It has been revised and re-edited for release by Totally Bound.

Share what you thought about Where the Devil Dances and earn reward points.