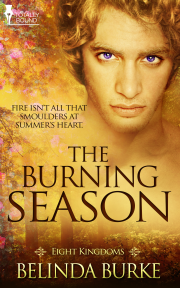 Book 3 in the Eight Kingdoms series

Winter’s love is blood and chaos…but fire isn’t all that smolders at Summer’s heart.

To claim Bran forever, Macsen has begun the ancient ritual of sidhe courtship—but such a rite is a trial in more ways than one. Tradition requires that Macsen seek Bran’s favor in his own country, and a Summer courtship is teasing and promising. More than that, Summer’s Queen will come between Macsen and her son however she can.

Despite his mother’s disapproval, Bran’s will is bent to the same purpose as Macsen’s—the achievement of four proofs of love, proofs that only Bran can determine or acknowledge. One step at a time, they come closer to a day when nothing will be able to separate them—but a familiar foe is more than willing to try.

In the mortal world, the year has continued to pass without a hint of green. The Green King has prevented the spring, and thus all seasons but winter. Still, it’s Macsen whom Dealla blames, and all her plans for violent retribution are directed at him. Failure may cost her everything, but that is a price she has long been willing to pay.

In the wake of her invasion, Macsen is left with a dilemma that might not be easy to solve. Love, or vengeance—which should he choose? Can they live together in the same heart?

Macsen lay unmoving, not sleeping, a hand over his eyes to block out the damned and brilliant sun. He was as the wolf in his winter coat, oppressed by the Summer swelter, but he endured for Bran’s sake. He had made a promise to stay, despite his discomfort in a place ruled by the sun. He had kept it, would keep it, but the time had come to go back to his own place. To return to the , even if only for a little while.

He smiled to himself. Yes, only a little while. Then I will return for you, Bran. The last time Macsen had come here had been for him, too. For the oath that almost shattered us…but nothing will come between us now. He bared his teeth. Despite himself, he knew that nothing wore the shape of the Summer Queen. Your mother does not want me to have you, lover.

Privately, he considered that she might have good reason for her fear and suspicions. The last few times he had come here had been for Bran, love on his mind, but long before, he had come here in response to a challenge. He closed his eyes, and the memories were there within him, waiting. Winter chill superimposed over the green of the leaves. The great lake frozen and red with blood, and all the blossoms fallen under the weight of snow.

If there was one thing that was the same, it was that even then, he had come for a son of the Summer Queen. His death was the beginning of all our enmity, Elenn. It was your fault, then as now.

He had not forgotten that he owed her pain, the price he’d said he’d take from her if her foolishness had harmed Bran. Bran would bear the scar of the wound he’d suffered at Dealla’s hands for the rest of time. Macsen had not yet dared himself to truly contemplate that woman, or how it was that she had gotten her hands on a weapon that could inflict a wound even he could not heal. That the Maiden hadn’t been able to heal. There was a vivid trembling in such thoughts, rage upon rage and the faintest snick of fear. Not for himself—never for himself. Only for you, Bran.

Macsen opened his eyes and stared up at the golden ceiling of Bran’s room for only a moment before he was blinded by dazzling reflections. He covered his face with his arm again. There would be time enough for those thoughts. For now…he would have to think of a proper goodbye. Bran wouldn’t like it, but he had responsibilities… And Summer isn’t good to me.

He knew the first thing Bran would suggest, but Macsen couldn’t bring Bran with him, not this time—not so soon, and not when his intentions were to make a point that couldn’t be questioned. “It will be sharp and deadly…at least for you, Elenn.” His smile gained teeth. I promised you pain. I always keep my promises, always.

“Macsen, you can’t kill my mother.”

He turned and caught Bran looking at him, wide-awake and a smirk on his face to match the tone of his words.

“How long have you been up, Bran?”

“Summer’s made you sneaky.”

Bran snickered at him. ”Like that means anything coming from you. What are you thinking? I thought you said you’d be good.”

It was Macsen’s turn to laugh. “Good? Me? Never.” He turned and took Bran into his arms. “I wasn’t really thinking about your mother, I was thinking about you. About courting you, and what her face will look like when she’s forced to acknowledge me as yours.”

Bran blinked at him. “Don’t you mean acknowledge me as yours?”

“No. It will be far worse for her to know that you have chosen me. After all, she already knows you are precious.” Macsen drew his fingers across Bran’s chest, up past his throat and tangled them into his hair. “Just like I know it.” Macsen kissed him, pressed closer. Bran was heat and eagerness in his hands, and Macsen took full advantage of his willingness to deepen the kiss, nip at his lips.

He murmured the words against Bran’s throat, and Bran went still under his hands.

“Miss me? Are you going somewhere?”

Macsen pulled back far enough that he could look into Bran’s face. “I have to go back to the . I am a king, you know. I can’t leave everything in Talaith’s hands forever.” Macsen pressed his lips against Bran’s frowning mouth, tried to coax a smile out of him. “It won’t be for long. I don’t want to be away from you. I promised you I’d stay with you, didn’t I? I also promised I’d court you, prove my love to you—to everyone—and that means there are…necessary things.”

“By everyone, you mean my mother.”

“I mean everyone.” Macsen fixed Bran with a stare he hoped was compelling enough to make clear how serious he was. Bran licked his lips, flushed faintly, tried to look away, but Macsen held his chin with one hand and leaned closer.

“Don’t look away. Why do you always look away?”

“You—” Bran pulled his gaze up to Macsen’s and Macsen saw curiosity there and bewildered confusion. “Sometimes it’s too much, when you look at me.”

“It’s like I’m there in the dream again, looking at you…looking at me—maybe your power’s too much for me.”

He smiled, but Macsen only blinked at him, uncertain. In the dream again? “That’s no power of mine.”

Bran’s confusion turned startled. “I— But you’ve had them too, haven’t you? Those dreams…”

“At Samhain for many years, and when you were…in trouble. Then, I’ve had dreams like what you’re speaking of.”

“I dreamed them every night when I was alone.”

Bran’s voice was soft with confusion. Macsen shrugged. “So it’s your power, and not mine. Like everything else, you’ll learn it in time. So impatient, Bran.”

Bran quirked an eyebrow. “I’m the impatient one?”

Macsen kissed him to silence, then out of it, held Bran still while he licked the softness of his parted lips. “You are. A hunter knows patience by instinct—when to stalk, when to pounce…” He moved his mouth from Bran’s lips to his throat. “When to sink in his teeth.” Bran shivered beneath him, turned his head, anticipating, and Macsen took the invitation for what it was. He bit deep and slow, was flooded by heat with the first mouthful of Bran’s blood. The pressure of Summer around him receded from his awareness, even as he drank the fire from so near its source.

Share what you thought about The Burning Season PRINT and earn reward points.

Buy Now: £4.99
A Harvest of Dreams and Embers
Belinda Burke