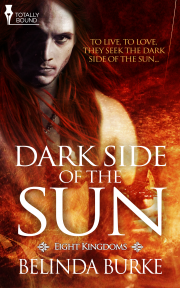 Dark Side of the Sun

Book 1 in the Eight Kingdoms series

An ancient pact was once broken by the theft of Summer's Prince. Now, the Red King has found him. To live, to love, they seek the dark side of the sun...

A thousand years ago, Milesian invaders gained ownership of Ireland from Summer's Queen through trickery. Since that day, the green isle's native sidhe have been imprisoned in their hidden kingdom, bound by their ancient pact with the Milesians.

Now, the treaty has been violated. The Milesians have stolen Bran Fionnan, the son of Summer's Queen. Trapped in the human world with no way of returning home, Bran is held under a death threat that forces him to work for his captors. He must forge weapons the Milesian huntresses can use to slay their new foe: the Red King.

The Red King is Macsen Cadoc, a vampire—a hunter who cannot stand being hunted. He seeks vengeance for the Milesian attacks in spilled blood—Milesian blood, and the blood of the sidhe traitor who has forged their weapons.

When the one he finds is a victim, not a traitor, everything changes.

Bran Fionnan is the Milesian's most valuable prize, but from the moment Macsen sees him, he wants him…and the Red King is not accustomed to being denied—by anyone. What begins with desire may end in extraordinary ways, but first there are questions that must be answered.

What is love? Can it help Bran overcome lost ties and a lifetime's worth of anger? Can it help the Red King gain more than the satisfaction of his lusts?

This is…one of those dreams.

The Red King scowled in his sleep.

Most often, Macsen’s sleep brought him nightmares. He had visions of destruction, of mortals in the woods of the hidden kingdoms, moon and firelight shining on their weapons. He saw flames consuming his palace, or his throne overturned, its frost and darkness both dispelled.

Only on Samhain did Macsen have this dream, in which he was someone other than himself.

He didn’t like it. He didn’t like not being in control of himself, and while he dreamed Macsen remembered things that he knew would not come back to his memory in waking life.

Other visions, other days…the face of a child, a golden power, and… But it was lost to him then, Macsen’s own thoughts caught up in the rush of the images that had hold of him.

Gold grew alive in his hands through some inner power. He looked down, saw a stranger’s face reflected in the gilded steel, had a thought that was his own, disassociated with whoever he was in the dream.

Beautiful, he’s beautiful. Who are you, stranger?

One hand reached up and pushed back blond hair, but it fell forward again over blue eyes dark as summer twilight.

The images wavered like a reflection on a pool.

The vision vanished into darkness. Macsen opened his eyes and tensed his fingers in the fur drawn up over his body. He blinked at the smooth, familiar features of the face leaning over him, then let his hands relax and closed his eyes to the presence of the female bent over his bed. The smile on her face was obscenely cheerful, and all he wanted was to go back to sleep.

For the first time he could remember, Macsen wanted to go back to one of his Samhain dreams. Despite the haze over the recollection, the thought of that male stuck with him, the shade of those blue eyes.

Was he human or sidhe? Mortal or immortal? Real…or not? As he considered it, Macsen thought that those blues eyes were set in a face he had seen before. A face he knew, and not from someone he’d drunk. Sidhe, then. But who?

A name hovered at the edge of his consciousness.

The voice cut the thread on which Macsen had been reeling the name into his awareness, and frustration boiled in him.

“Enough, Talaith! I’m awake, go find someone else to torture.”

Despite his tone, Talaith’s smile didn’t change. She obeyed, but without hurrying. Before she left Talaith opened the great window in the western wall to let in the moonlight and the night.

The sounds of his winter kingdom’s dances and the horns of the waiting Hunt came faint but clear to Macsen’s ears. He felt a tingle on his skin, a cold wind that came through the open window with the scents of pine and snow.

The Red King closed his eyes again and tried to bring back the memory of his fading dream, but as had happened every year before, the details were gone. Macsen remembered only that he had not been himself. That he had seen blue eyes in a beautiful face.

He scowled then, irritated he couldn’t remember whose face it was, and threw off the covers. The Red King couldn’t ignore his duty, even if he wanted to. The moon was at its half in the sky outside, and tonight was a night of power. His presence was required for the taking of the sacrifice.

But he had seen those blue eyes before, had dreamed of being someone who was not himself before, he knew at least that much. Every year on Samhain night—for how many years now? More than ten? More than twenty?

Macsen wondered if he would ever know what it meant, then shrugged and grinned with all his teeth showing.

His was a world in which everything happened for a reason.

Macsen lifted himself out of bed then and crossed to stand naked before the great window that looked out across his kingdom. He tried to push his dream out of his thoughts. It was Samhain, and the night was just begun. He was looking forward to the sacrifice, and wondered which of his pets Talaith had chosen.

He hoped it was one with blue eyes.

Macsen passed down a long curving stair and out into the wild celebration of his court. Shouts of welcome and screams of glee greeted him. His presence meant the highest point of the rite had come. With deliberate steps, Macsen passed through the crowd and came to stand at the foot of the stairs that led up to his throne. Talaith was waiting for him, holding a woman spellbound by dark allure.

He took the sacrifice into his arms, stroked her auburn hair and ran his fingers over her skin, pale in the starlight. Her eyes were blue, but not the shade that he was hungry for. Still, Talaith had chosen well as he had known she would. Eight hundred years at his side had taught her his preferences.

Macsen held up the sacrifice before his people and listened to them howl for her death. She was only a human captive from last year’s Hunt, but tonight she bore the full attention of the Red Court. Under the pressure of Macsen’s allure she submitted to his grasp, to the hungry howl of the sidhe. She was a creature without a will of her own.

The Red King put her down on her feet and gathered up the length of her hair in one fist. He addressed his court in a ringing voice.

“For the Hunt, and its power!”

A tide of whispers from his court returned the words to him.

“For the Hunt and its power!”

“Because I am your king, unless one among you would challenge me!”

Below him, a hundred sidhe drew a breath in unison. No one spoke. He hadn’t thought anyone would. His power was legend, as much to his own as to humans.

I was unsure what I was getting into with Belinda Burke’s debut novel ‘Dark Side of the Sun’, since most stories involving the fae that are also very romantically inclined are sadly disappointing...

Wow this world was amazing. The Eight Kingdoms series is a great take on the sidhe and the seasons and I am hooked. It was dark yet not gruesome even though some aspects were bloody. There was an ol...

Share what you thought about Dark Side of the Sun and earn reward points.