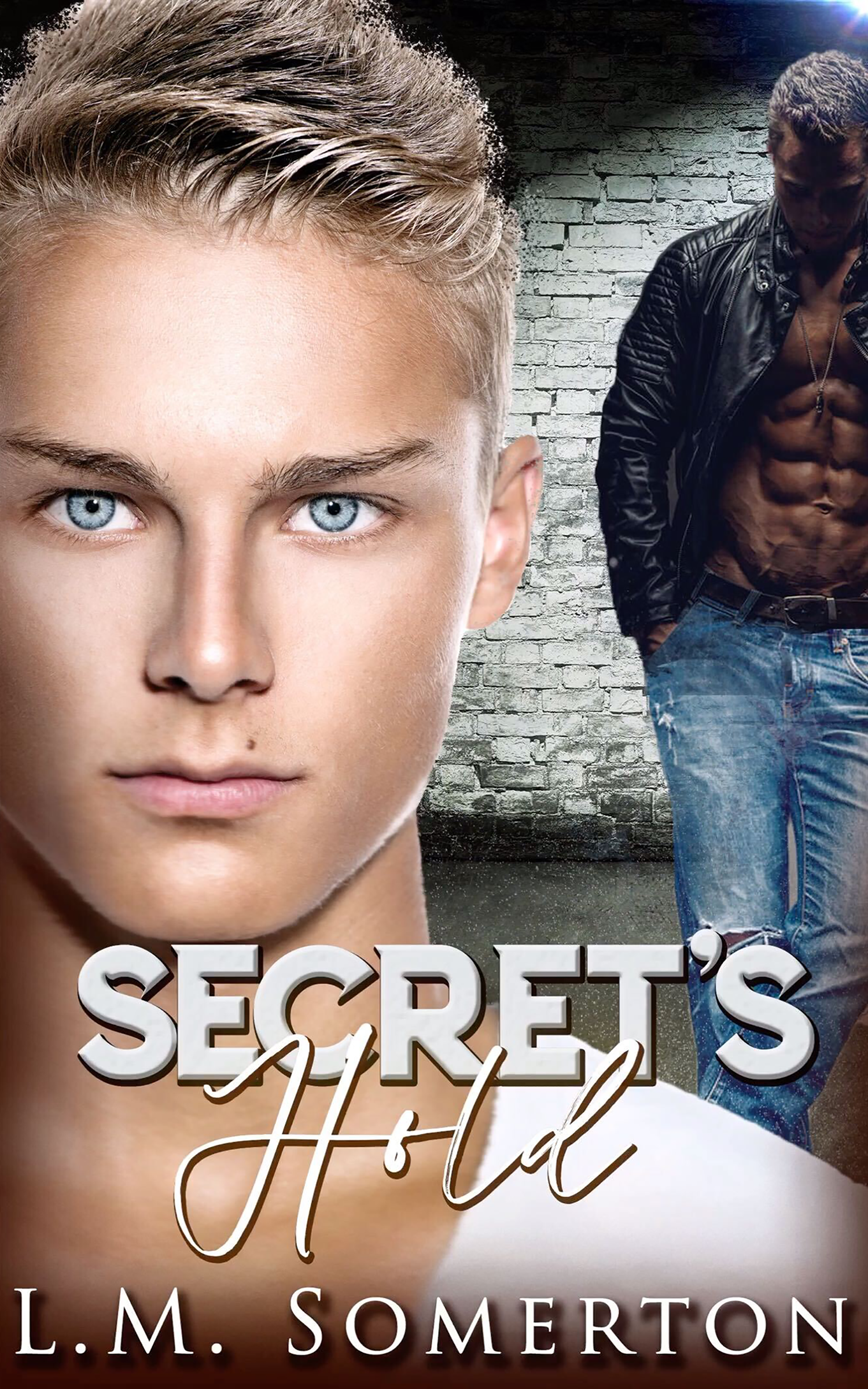 Hiding in plain sight is a risky business—in more ways than one.

Jamie is hiding from the past and sacrificing a lot to do so. After witnessing a murder, he’s on the run from powerful enemies. Taking a job at a rough leather bar, Spikes, is a way to survive off-grid.

Bubba is the bouncer at Spikes who takes a personal interest in protecting Jamie’s very cute behind, but when Jamie runs from the club in panic straight into the path of a van, there’s nothing Bubba can do.

Amnesia puts Jamie at risk, but his returning memories are even more dangerous. Desperate to protect his friends, he puts his life on the line for Bubba—the only person he can rely on to save his neck.

Reader advisory: This book contains a scene of attempted rape. There are also scenes involving abduction, violence, and the forcible administration of drugs.

As always, I walked the half-mile from my small apartment to Spikes, the club where I’d worked six days a week for the last five months. It didn’t get any easier, but fear and revulsion had dulled to self-pitying resignation. In my mind it was a game. Every day I climbed the ladder of success as I survived another shift, only to descend the greasy pole to get deposited back at Spikes’ staff entrance the next night. Five months of hiding. Five months of pretending to be someone, something, I was not. I paused opposite the entrance to the club and resisted the urge to check the shadows. I needed to work, and the one positive of being employed at Spikes was that I could earn good money and still stay off official radars.

Down the dingy side alley that ran the length of the building, Robbie stood guard at the back door. Most of the staff called him Bubba, but to me he was Robbie. I crossed the road then glanced up at him. He was stern and forbidding, but there was always a twinkle in his dark eyes for me.

“Behave yourself tonight, Jamie. I don’t want to be extricating your pretty little arse from another fight.”

I switched on my trademark cheeky grin as I slipped past him. “Is it my fault that the punters get excited around me?”

He tried to give me a clip around the ear but missed—deliberately, I thought. I experienced a little pang of regret. He was just my type—big, hairy and fierce. In another life I would have flirted with him, but I couldn’t afford too much attention, and a relationship of any kind was out of the question.

I trudged across the club, pushed through the staffroom door then changed into my working uniform of black leather trousers and a skin-tight latex top. The outfit no longer made me want to hide behind the nearest pillar, but I hated the pawing and groping that it attracted.

As the other guys changed around me, banging their locker doors and chattering about football, I felt so alone. If I’d had broader shoulders, I would have squared them. As it was, I just pushed my slight frame upright, fixed a grin on my face and walked into the cavernous bar, remembering just in time to add a mischievous wiggle to my hips.

I gave Ellis, my boss, the finger and sat on the edge of a table, swinging my legs and trying to look as bored as possible.

“For that, you get section six as well as your own. We’re one short tonight. Enjoy.”

Power had gone to Ellis’ ginger head. Promoted one day and he’d already turned into an arsehole. I stuck my tongue out at him as soon as his back was turned, but inside I was groaning. Tonight was not going to be fun.

The staff briefing was short and to the point. Once the club opened, covering two sections proved virtually impossible and I had to run to keep up with the orders. The punters loved watching the sweat gleam on my arms and face. One guy even tried to lick me. The masochist who had designed the Spikes uniform got some extra-special cursing as wet latex clung to my body and chafed my skin. I was sticky with heat and spilt booze, my hair damp against my face. Bruises from stray elbows and table corners ached beneath leather trousers too hot to endure.

Muscles protesting, I unloaded a tray of drinks for the raucous crowd in a corner booth, avoiding eye contact and ignoring their crude remarks. Leather chaps and a studded jock strap might look good on some men, but the bloke sporting the outfit was built like the proverbial brick outhouse, and the gear didn’t really suit him. I cringed as he grabbed my wrist and forced me to straddle his thighs. I was held from behind and rough hands pushed my legs farther apart, giving him access to my fly. He licked his lips and grinned while he grasped my zip with meaty fingers, ignoring my struggles and protests.

“Get the fuck off of me! You do not tip well enough for this!”

“Mm-m. Resist all you like, blondie. You’re not going anywhere.”

There was no room for underwear beneath my uniform trousers, which didn’t normally bother me. Tonight, I would have happily slipped into a pair of cast-iron Y-fronts, because the arsehole’s goons gripped my arms tighter as he yanked my trousers down to my thighs. They twisted me across his lap and I forced my head around so that I didn’t have to look at his leather-clad bulge. I screamed as his hand connected with my arse, leaving a burning trail across my skin. He bent his head close to my ear, and beer-sour breath filled my nostrils as he wound a hand into my hair and dragged my head up.

“I’m going to fuck you so hard that you’ll never walk again.”

The whispered words made me fight and struggle even more, but he just laughed. His cronies jeered and urged him on as I was forced facedown onto the padded bench and held there by a collection of willing hands. I caught one glimpse of a huge, purple-veined cock as he moved behind me, and my mind went blank, my body limp.

Then there was an ear-splitting scream and it hadn’t come from me. Robbie threw my attacker across a table and into the nearest wall with one effortless heave. Fists flying, he cleared the area in seconds and hauled me to my feet.

“Get into the staff room and sort yourself out.”

I didn’t need telling twice. I yanked up my trousers then ran, leaving the chaos behind me. The dingy room felt as good as any holy sanctuary—quiet and empty. I stripped off my shirt then toweled the sweat from my neck and chest. A dousing under the cold tap shocked me back to reality as I raked my shaking hands through dripping hair. My heart pounded when the door opened, but it was just Robbie checking up on me. His look of concern was replaced by something else as he took in my bare chest.

“Okay?” Robbie was a man of few words.

I nodded with a confidence I didn’t feel. “Sure. Just give me a minute.”

He frowned. “Take ten. You’re voted in for the lockdown, so you may as well change and take a breather.”

I sighed. Punters paid extra for the after-hours lockdown and voted for the waitstaff they wanted to serve them. It was the last thing I needed. Robbie looked like he was going to say something else but turned away and closed the door behind him. I slumped against the wall and made a heroic effort to hold back my tears. I didn’t deserve any of this. One stupid decision, one moment’s curiosity, shouldn’t mean my life had to be this miserable.

“Suck it up, J.” How about those for inspirational words of self-motivation? I stripped completely and let the air caress my body for a moment before pulling on tight leather shorts. They were indecent, barely covering the curve of my arse and riding low on my hips. My fingers had steadied enough to fasten the collar around my neck and I twisted it so that the attached lead hung down my back. I turned short white socks over the top of my black combat boots and resisted the urge to count the bruises blooming on my pale skin.

I drank half a bottle of cold water and took a few slow, calming breaths. “You can do this. Just blank it out.” I pushed the door open and peered into the club. It was the biggest lockdown crowd I’d ever seen. My eyes roamed across the sea of men—some familiar, some fresh. Then my gaze rested on a face I knew—not a regular punter, but someone from my past.

“Fuck!” The feeling of panic far surpassed the fear I’d felt at the prospect of rape. My vision blurred, and I couldn’t think straight. I had to get out. I shot across the bar, barreling through the exit into the street. I caught one brief look at Robbie’s startled face, then turned…straight into the path of an oncoming van.

That was one mind-blowing, suspenseful thrilling narrative. Writing this kind of story in just 70 pages, I couldn’t believe my eyes, what a great job! A lot is happening, Jamie works in a rough leath...

Share what you thought about Secret's Hold and earn reward points.