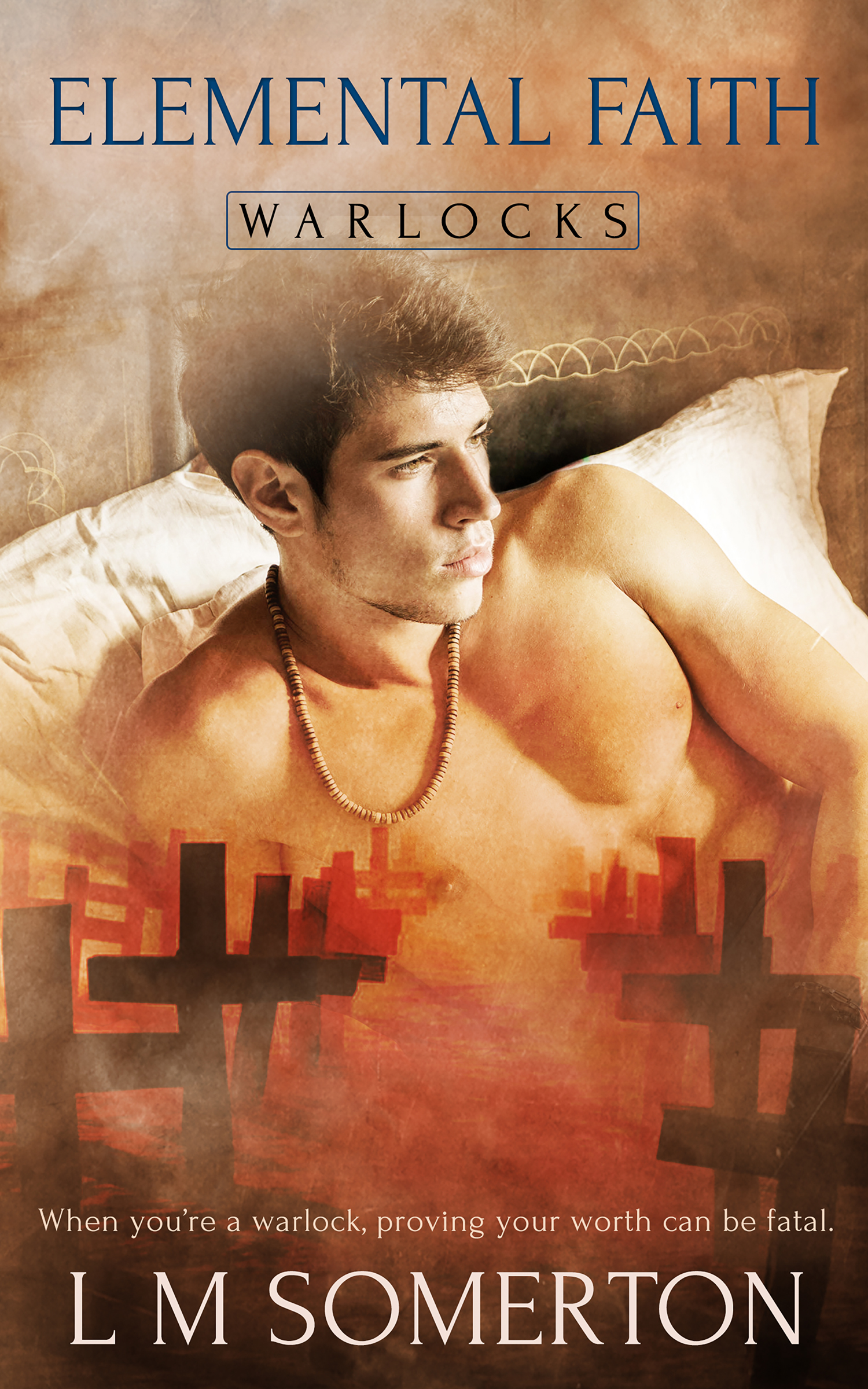 Book 3 in the Warlocks series

When you’re a warlock, proving your worth can be fatal.

Evrain Brookes had thought that being a warlock was about genetics—a freak offshoot of evolution that somehow allowed him to manipulate the elements. So when his godfather explains there’s a deeper purpose for warlocks being around, one that stretches back into the reaches of time, Evrain is intrigued.

Warlocks have been using their abilities to tweak the course of history for the better since records began but before Evrain can be allowed to fulfill his destiny, he has to pass a test. This challenge takes him and his life partner, Dominic Castine, back to Scotland, to the Isle of Skye. What they both face there will determine the course of their future.

Evrain has no way of knowing if he will prevail, but both their lives depend on it.

The view from Evrain’s top floor office window at ThInk, the design company where he worked, was enviable. His drawing board was set up so that he got the best light in the building and could daydream whilst admiring Portland’s cityscape and Mount Hood in the far distance. The rare sunny days were a gift. Today wasn’t one of them and his view was nonexistent.

“I swear the weather here is worse than in Scotland.” Evrain scowled at the scudding clouds and lashing rain.

“Talking to yourself again, Mr. Brookes?” Pete Markowitz, Evrain’s office-mate, wandered over to peer at his work.

“How else am I going to find intelligent conversation around here?” Evrain grinned. “All you ever talk about is the Winterhawks or your latest conquest and I don’t care about either.”

“You know the boss put the two of us together in here for a reason,” Pete said.

“Because we’re both gay?” Evrain knew that wasn’t the case but this was a familiar conversation and he was required to follow the pattern to keep Pete happy.

“That applies to half the staff here. It’s because you’re the only employee that knows squat about hockey and therefore will not dispute my opinions on the Hawks. I end up brawling with everyone else and that’s not good for the office furniture budget, apparently.”

“You don’t have opinions, you make blinkered statements based on a relationship bordering on obsession. You’re a hockey stalker, Pete, and you know it.”

“You still have to listen and nod at my sage pronouncements. It’s in your contract. Read the small print.”

“Go back to work, you idiot. Or get me a coffee. At least that would be useful, and you don’t appear to have anything better to do.” Evrain stood back to examine the artwork on his board. The designs were to support the launch of a new perfume and lived up to every fragrance advertising stereotype ever created—exactly what the client wanted. “If I never have to use a shade of pink again, I won’t object.” Silence met his statement and Evrain realized he was speaking to an empty room. He hoped Pete had taken the hint about coffee and was making a trip to the independent coffee shop down the street rather than the vending machine in the staffroom, which dispensed brown-colored liquid of indeterminate origin. Evrain would rather drink some of Dominic’s organic liquid fertilizer.

He took the opportunity provided by Pete’s absence to use his power to manipulate some of the natural inks on his drawing, making subtle changes to the depth of the colors. The delicate work was difficult to manage with Dominic out of range. It was easier when Evrain could channel his power through his lover but he couldn’t stash him in an office cupboard, however much he’d like to keep him close. He fiddled with the gold bracelet around his wrist. The heavy links pressed close to his skin and the clasp was robust. It wasn’t a pretty piece and not worn for show. In fact, it was a little too similar to a manacle, something Evrain chose not to think about. Chains belonged on Dominic, along with an assortment of other bondage accoutrements, not on him, but the pure metal served to dampen his power, something essential to keeping the city of Portland intact.

Evrain’s dick stirred at the image of Dominic chained naked to their bed. It wasn’t a fantasy, it had been reality just the previous evening and Evrain couldn’t wait to get back to his lover. He relished the challenge of turning him into a begging pile of need, with or without the use of his powers. “Perhaps I can get away with taking a few hours off this afternoon,” he murmured. His current project was almost done and he’d been putting in a lot of extra time in recent weeks. His grandmother had left him enough money that he never needed to work again if he didn’t want to, but he enjoyed the normality of having a career. Of course he wasn’t normal and never would be, but sometimes it was nice to pretend. He pressed the heel of his hand to his crotch.

“Thinking filthy thoughts about Dominic again, I see.” Pete elbowed through the door before shoving a take-out cup into Evrain’s hand. “Can’t say I blame you. If I had all that gorgeousness waiting for me at home, I’d have a permanent woody too.”

“A woody? What are you, ten years old? And that makes me think of Toy Story, which is all kinds of wrong.” Evrain took the coffee and mulled over a few ideas of how to get revenge on Pete. Not that he would act on any of them, but it was fun to imagine softening the tarmac so that Pete’s car sank to its hubcaps in the street, or turning the cotton threads of his underwear back to their original plant form. “Now that one has potential.”

“What does?” Pete asked.

“Just an idea for those science textbook covers I’ve got lined up as my next project.”

“Right. I don’t believe a word of it.” Pete took a noisy slurp of his drink. “The three of us should have a night out soon. Drinks, dinner, hot, sweaty, shirtless dancing… You know the kind of thing.”

“Nobody sees Dominic shirtless but me,” Evrain growled.

“He’s everyone’s type.” Since Symeon Malus had worked his evil magic on Dominic, the man’s beauty and allure were irresistible. Evrain would happily keep his lover locked away from public view but Dominic tended to get irritated if Evrain tried to prevent him from mowing his customers’ lawns. Not that he did much of that work anymore, but he refused to give up a few of his elderly clients who relied on him the most. Those he was gradually handing over to a small start-up outfit he’d found, working with them until his favorite customers were content they could be trusted upon. Most of his work was now at Hornbeam Cottage, where his organic herb business was thriving.

“Show some pity. When we go out together you two attract all sorts of attention, which means I get to cruise the fringes of your admirers. I’m pathetic, I know, but I haven’t gotten laid in weeks. I need you two to facilitate my sex life.”

“I can name at least three clubs where you could pick up a one-night stand seconds after walking through the door,” Evrain said. “You need to get less selective, that’s all.”

Pete stuck his tongue out at him. “How did you meet Dominic?”

“He was my grandmother’s gardener, believe it or not. I helped him out potting a few seedlings and the rest is history.” The truth was a lot more complicated than that but Pete didn’t need the details and the part about potting seedlings was true.

“Unbelievable. Some people have all the luck.” Pete went back to his own drawing board on the other side of the room, muttering under his breath. “Perhaps I should get a hobby, join a club or something. Flower arranging, or cake decorating.”

“Then you’re either after a nonexistent stereotype or switching sides. Without wishing to generalize, I think you’ll find that most attendees at either of those classes will be female.”

“Maybe I need a new girlfriend. She’d have better tips for hunting down a man than you do, that’s for sure. Oh, I think your jacket’s vibrating.”

Evrain had turned his phone’s ringer off during a staff meeting earlier that day. He retrieved it from his jacket pocket just as it cut off but when he saw who had called, he rang back immediately. “Dominic?”

“Hey. I’m sorry to disturb you, but is there any chance you can come home early?”

“Why, what’s happened? Are you okay?” Evrain gripped the phone harder.

“I’m fine, but there’s something here you should see. I don’t want to talk about it over the phone. Don’t worry— it’s not dangerous. At least I don’t think so.”

“I’ll be there in less than an hour.” He disconnected reluctantly, a hard knot forming in his stomach. Dominic sounded scared and that was not to be tolerated. If there was even the remotest chance that he wasn’t safe then Evrain had to be with him. “I have to go, Pete. If the boss wants my designs for the new perfume project, they’re all here on my board.”

“Sure, I can show him the poufy pink passion pong. Is everything…?”

Evrain grabbed his jacket then ran for the elevator. He and Dominic had been living an uneventful, peaceful life for the last six months, something they had both enjoyed. “Should have known it was too good to last. Fuck,” he yelled at the elevator doors, fear driving his temper. I swear I’m never letting that man out of my sight again.

I swear I almost fell OFF my bed laughing at this conversation. It was so funny. I love the chemistry and the sassiness between Dom and Evrain. It’s hilarious, but it’s also made them grow a lot...

Share what you thought about Elemental Faith and earn reward points.

Other books in the Warlocks seriesView Series Page