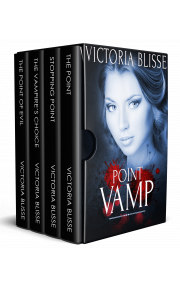 Love conquers all, that is the point, but can it bridge the differences between a vampire and a woman?

Hugh is twenty eight. He has been twenty eight for nearly one hundred years. Hugh is a vampire. He owns a club called The Point and he pays girls to have sex with him. He then counts to ten as he sucks their blood to semi-satisfy his lust.

Elizabeth is a doctor, she loves her job but likes to escape into the countryside now and then. When she twists her ankle Hugh comes to her aid. He carries her curvy form all the way back to his home. He takes care of her ankle and the rest of her body too but he goes too far and sucks her perfectly intoxicating blood.

How can these two lovers have any kind of relationship? They don't know, only time will reveal the answers.

Josh is a vampire…he just doesn't quite know it yet.

He is confused and his voluptuous sire, Cara is far too busy being mysterious to really help him unlock the secrets of his Afterlife. However, he pieces it together by himself and decides to turn his best mates into Vampires too. This doesn't quite go to plan but he does discover The Point and its unique, ten-second rule.

Cara does not approve of Josh visiting The Point but that night she turns up at his door bloodied and much more dead than usual, and accepts Josh's help to escape from her much older and much crazier Sire Leopold. How is Josh going to defeat an older, wiser and more powerful vampire? He hasn't a clue but for Cara he is willing to find out.

A crazy vampire or an ice-queen human, it's not much of a choice but it is the one Kyle has to make.

Kyle may be undead, but he still lives at home with his Gran and works in a supermarket stacking shelves with his mates. His life hasn't changed much, apart from being dead and having to suck blood from live humans to survive.

Luckily he knows The Point, a vampire bar where the humans are hot, tasty and eager to please. Well, most of them are. Janine is the exception. She is cold and distant, but from the first time he meets her, Kyle is smitten.

But he has a problem. A hot but crazy female vamp has got him in her sights and she'll stop at nothing to get him all to herself.

Kyle has a decision to make and it will change his afterlife forever. Who will he choose?

The Point of Evil

Blood and sex were all he ever wanted until love gave him something worth living an eternity for.

Steve—who had been a womanizer in life and was even more so in death—prowls the Point using his vampiric wiles to get the blood and sex he craves. He’s always looking for his next meal and when he sees a tall, curvy beauty with a red scarf around her neck, he thinks he’s found it.

Eloise is different—she’s shy and needs encouragement, and Steve just can’t get her out of his mind. He has to take his time, get to know her and slowly seduce her. When she disappears, leaving only a note begging him not to pursue her further, he can’t help himself and ends up in the service of George Aquino, a vampire crime boss with a penchant for twisted and cruel torture and a dungeon full of prisoners.

A daring rescue, a difficult choice and love against the odds. Do you dare visit the point of evil?

Reader Advisory: These books contain scenes of violence and bloodshed, and references to rape and sexual assault.

Hugh needed more, and as he thrust inside the juicy cunt beneath him, he knew it wasn’t enough. She moaned as he continued to go through the motions. If it were up to him, he’d leave out the sex bit, but it was an essential part of the process. He rolled onto his side, carrying the waif-like girl with him. She laughed and squealed in shock, and he pulled her back down onto his cock. He pressed a practiced finger to the juncture of their bodies and rubbed. Soon, she screamed and bucked as her orgasm struck her.

Hugh grunted and groaned as if he’d come, ready now for the thrill he was really after. He pushed her back down onto the bed and off him. She giggled and gasped as he grabbed her long hair and twisted her neck to the side. She was still involved in her pleasure—he could feel the shockwaves of it passing through her body.

“No,” she gasped, but her fake fear rang hollow as he flicked out his sharpened teeth and plunged them into her jugular vein. 10, 9, 8… Very carefully he counted as he drank, the vitality of her fresh blood zinging through him. He didn’t let himself get lost in the ecstasy, though. When he thought the number one, he reluctantly ripped himself away. He would never get used to not draining a human but the slight discomfort of hunger not quite sated was better than the guilt of death.

He felt as if he’d been denied just on the brink of orgasm, but at least, his body buzzed with life even if he wasn’t full up. He took a wad of twenty pound notes from the pocket of his jacket beside the bed and gave it to the girl.

She smiled, her eyes still blissed out from the effect of the orgasm and the blood loss. Humans seemed to get some kind of thrill from the bite, a sexual pleasure that was as intense as the climax itself. He didn’t really understand why but maybe it was a defence mechanism. If a vampire was sucking your blood, you were about to die. Might as well go with a smile on your face rather than in abject fear.

“See you again, Hugh. You’re the best, you know that?” she said in a squeaky, well fucked tone, stuffing the money into her handbag, which had been discarded on the dark wood night stand.

“Thanks.” He pulled his mouth back into the semblance of a smile and pulled on his creased black trousers then buttoned his stiff white shirt. The blonde cleaned herself up and dabbed at the marks at her neck with a tissue. Hugh had offered to heal her, but she was one of those girls who liked to show off the marks to her friends. To show them she’d really been with a vampire. Hugh felt slightly bad that he didn’t know her name though he’d fucked and sucked her five times before. Hugh liked predictability and would pick the more experienced girls wherever he could, but never for more than a dozen times. He couldn’t risk getting attached.

He fastened his tie then shrugged on his long-lined suit jacket. “Goodbye,” he said and didn’t wait for an answer. He walked from the room, through his club, The Point, and out the front doors into the cold air of the night.

Hugh hated what he was but over the years had developed a way to cope with it.

Share what you thought about Point Vamp Box Set and earn reward points.