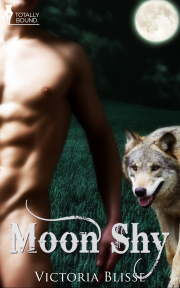 Desdemona takes great joy in the full moon. She maims and kills with enthusiasm and wishes she could be a werewolf every day. Lowell hates what he is. He wishes that the full moon would only come around once in a million years.

Jenny is a sweet girl who often acts before she thinks, especially when a man is involved. She finds herself between these two werewolves. She loves Lowell, he was her school crush way back when. Desdemona is her superior and makes her working life a misery.

But which werewolf will have Jenny in the end? Will Desdemona succeed in killing her during the full moon, or will Lowell be able to keep her safe and in the dark about his horrific secret? It comes down to a fight between two werewolves, one Moon lover and one Moon Shy. Who will win?

Reader Advisory: This book contains some graphic violence, although the violence isn't too gruesome.

His hands moulded her arse, and she couldn’t believe it. She’d worked for ten months at this boring, mouldering old firm just because he did, too, and finally, she had her hands on him—and he on her, come to that. He was drunk, she was drunk. It was an office party, after all. They’d simply been chatting over the table of nibbles when he’d asked her to dance. She had accepted and enjoyed rubbing up against him while onlookers gaped at quiet little Jenny, dancing with the hottest property on the fifth floor. When he’d whispered in her ear about meeting her in his office, somewhere quiet for them to come to know one another better, she’d jumped at the chance without thinking of the sadness of ten months working together and him only just knowing her name. They’d left the party together. The company was so broke, they were doing the typical Christmas do several weeks early and in the office itself. No one seemed to mind, though. There was plenty of free booze. As soon as they’d reached his office, his lips had been on hers, his hands on her arse. If she’d been even a drink or two more sober, she would have slapped him. But she was drunk and horny, so she’d slipped her arms around his neck and pulled him closer. As he undid the zip that slipped down her back, she loosened his tie and opened his shirt. She was soon clad only in her sexiest bra and knickers before him, too desperate for his cock to worry about her chubby tummy or wobbling thighs. He seemed to find her attractive enough. She dropped to her knees to see to the bulge hidden under his trousers. His dick was hot and hard and fitted nicely in her mouth. She sucked for a little while before he barked out a command. She obeyed instantly, leaning over the desk, feeling the warmth on the wood where his buttocks had just been pressing and the chill on her breasts of the cold, early November evening. He spanked her, teasing her, before he pulled off her knickers and forced his way inside of her. She rocked back against him as he banged furiously into her with no care for her satisfaction. When he came, spurting all over her buttocks and back, she was still aching for more. But he passed out on his office chair. She covered him with his jacket, dressed and went home with the plan to wank furiously, but all she did was fall into bed. The next morning, she was summoned to Mr. Taylor’s office. It looked different in the daylight, but her cheeks flushed as she remembered the hi-jinks of the night before. Mr. Taylor, though, was not up for a repeat performance. “But-but you can’t fire me. You were having sex, too!” Jenny exclaimed in an explosion of disbelief and fury. “I was merely testing you, and you failed,” he said, not a sign of a smile on his lips. “You bastard! You snotty, fucking bastard!” she yelled. “Well, you can stick your crappy, little job up your arse, because I don’t bloody well want it, anyway.” And she stamped out of the room. Just as she stood in the doorway, she yelled so the whole floor could hear, “And you’re a fucking awful lay with your tiny penis and your lack of staying power. Go fuck yourself!” She walked over to her desk, head held high, very much aware of the stares. She gathered her things and left, and it wasn’t until she had walked down the street that she burst into tears. She quickly pulled herself together and bought a copy of the local paper. She looked at the jobs section, and there was a big advert for Demonet. They were looking for new customer service representatives. She was not particularly keen on the idea of working for a company that would see her as a nameless drone, but she decided to apply for the position anyway. Times were hard, and she needed a job. She had a flat and associated bills to pay. Needs must. Two weeks later, she walked into the Demonet building for her first day at work.
Buy Now

Share what you thought about Moon Shy and earn reward points.