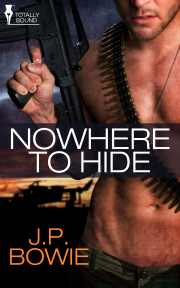 An American doctor meets an Australian soldier in the wilderness of Darfur, and soon their passion burns hotter than the desert sun.

Doctor Mark Hamilton working for Doctors Who Care International and stationed at a refugee clinic in Darfur, never thought he'd meet and fall in love with someone like Sergeant Major Jack -Boomer- Caruthers in the middle of the strife torn territory-nor could he ever imagine being sold as a sex slave to an exiled Prince!

Fortunately for Mark, it's Jack to the rescue. The two men make a daring escape into the desert and are picked up by Jack's team, but Mark ignores Jack's warning not to return to the clinic, with dire results.

Once again made captive by the slave traders, Mark can only cling to the hope that Jack's love for him is strong enough to face the dangers he will encounter in the vast deserts of Somalia.

The heat outside the makeshift emergency clinic was close to unbearable. Doctor Mark Hamilton wiped the sweat from his forehead and took a long swig from the bottle of water he carried. Northern Darfur was not, and never would be, the ideal spot for a summer vacation, he mused, with a wry twist to his generous mouth. Not for the first time he wondered who he should thank at 'Doctors who Care International' for sending him to this cosy spot.

Mark turned at the sound of one of the nurses calling to him from inside the tent that served as a refugee camp emergency clinic until the promised, more permanent hospital was built. Promises, promises. Mark had tired of officialdom's lack of coming through on those promises, and had more or less resigned himself to looking after his patients as best he could, with what medical supplies he'd brought with him, and what the UN sent sporadically.

The pretty young nurse gazed up at Mark from dark eyes, rimmed with tiredness. "It is Ghali, Doctor. His breathing is strange again."

Mark sighed. Ghali, a young boy, had been brought to the clinic two days earlier suffering from dehydration and borderline malnutrition. Not an uncommon malady in this part of the world, but the boy had been wearing clothes that told Mark Ghali was not one of the thousands of poor, undernourished children living in Northern Darfur. His shirt and shorts were of good quality, his shoes more than serviceable. The few words he'd uttered since he'd been brought in by the goat herder who'd found him lying among some rocks were not of the local dialect. Mark's guess was that he did not come from any nearby town or village, which led to the inevitable questions - what on earth was he doing here, miles from home, and how had he managed to get this far?

So far, Ghali had not answered either of those questions. He'd simply gazed up at Mark with eyes like fathomless dark pools of sadness. Something bad had happened to the boy, and he was either too ashamed or too traumatised to tell anyone of it.

Mark followed Asima into the clinic, and walked between the long line of beds that flanked either side of the narrow canvassed structure. As usual, Ghali stared at Mark as he approached the bed, his eyes wary, as if he expected Mark to pick him up and throw him outside.

"Salam, Ghali. Kaifa haloka - how are you?" The boy visibly flinched when Mark knelt by the bedside and placed a hand on his forehead.

"He does not seem to understand," Asima said quietly.

"Could be my lousy Arabic. Easy there, kid," Mark murmured."No one here is going to hurt you." He brushed back the black curly hair from Ghali's brow. He took the thermometer Asima handed him and pushed it gently into the boy's ear. "His temperature is slightly elevated, but nothing to worry about," he told Asima after glancing at the reading. "His rapid breathing is a product of his nervousness. He doesn't trust us yet."

Mark was loath to give Ghali a sedative. He was desperately low on that kind of medication and preferred to keep it for those patients with painful wounds suffered in rebel attacks. Every day he and the nurses treated victims of shootings or torture at the hands of the rebel factions that were rampant in Darfur. Still, he would like Ghali to have a peaceful night. He knew the boy had spent both nights at the clinic unable to sleep, his eyes wide open as if afraid to close them for fear of something, or someone, lurking nearby.

Mark stood, ready to go to his own quarters and get a sleeping pill for Ghali. "Half a pill would probably do" He stopped, surprised, when a small hand slid into his. Ghali looked up at him, his dark eyes glistening with unshed tears. Mark knelt by his side again, and gently squeezed the boy's hand.

"You'll be all right," he murmured in his halting Arabic, wishing he'd spent more time on this difficult language. "You're safe here."

Ghali slowly shook his head, then said a few words more clearly but in a language that had Mark at a loss. He looked at Asima helplessly.

"I think that he is speaking Turkish," Asima explained. "I understand a little. He says something about bad men looking for him."

"Tell him there are no bad men here."

Before Asima could speak, Ghali said in English, "They will come. They look for me. They will never give up—my family."

Share what you thought about Nowhere to Hide PRINT and earn reward points.