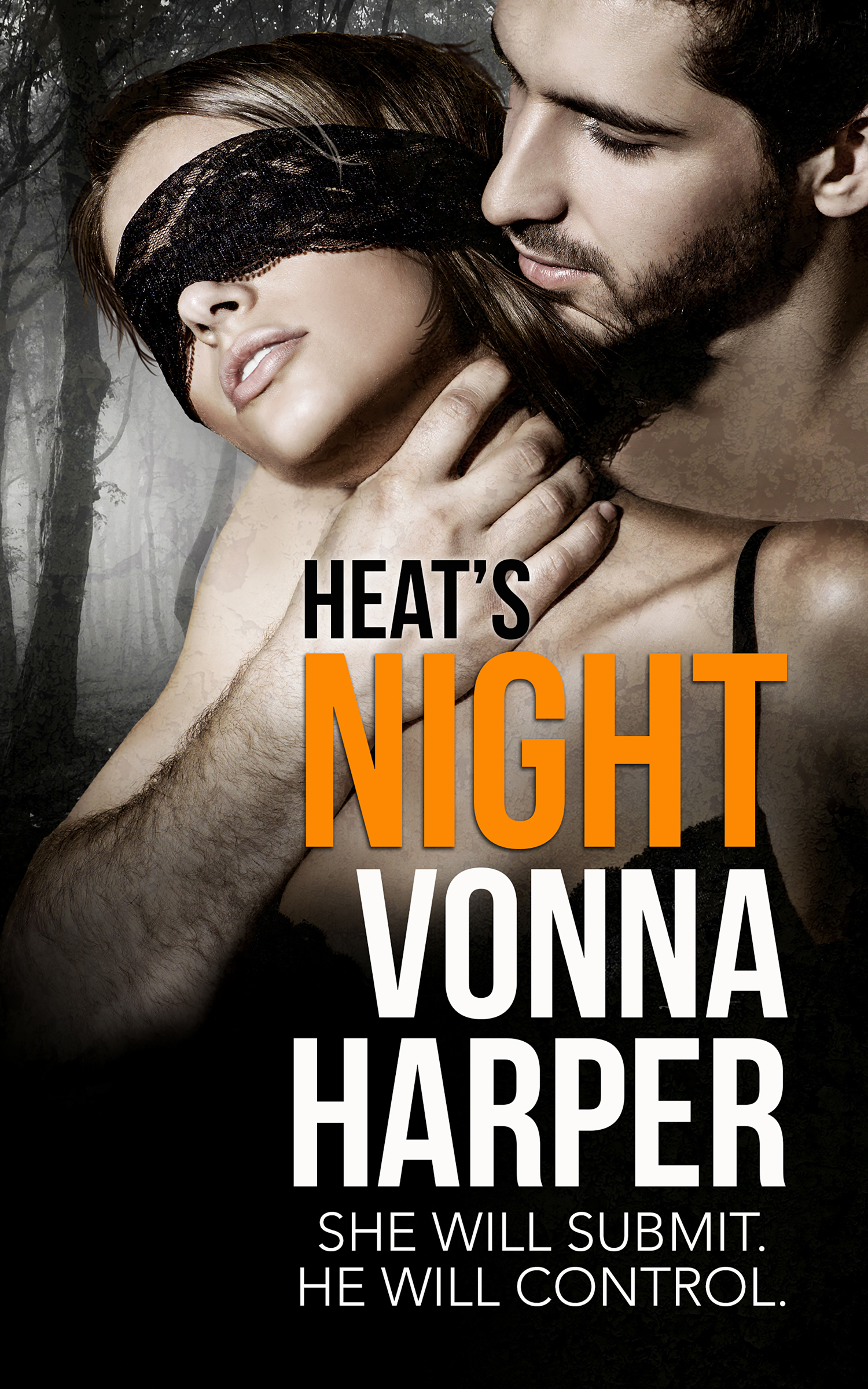 Hunger. Need. The Florida wilderness whispers the primal words and a modern man and woman hear them. She will submit. He will control.

One hot summer night, two restless loners enter a remote Florida preserve. The wilderness surrounds them, claims them. They are there for one thing—to silence their separate sexual energies, but fate brings them together. The wilderness casts its primitive spell.

High-powered CEO Raine Coello is desperate to break free of responsibility, to give her body to a masterful man. Despite his wealth, recently traded professional football player Klay Edelman must accept that the franchise considers him a possession. Dispensable.

But not tonight, not with this beautiful, sexy and submissive stranger. She needs to be taken, possessed. He will control her.

Publisher's Note: This book was previously released elsewhere. It has been extensively revised for release with Totally Bound Publishing.

Raine Coello cringed as she opened her rental-car door, waiting for the blast of hot air to hit. Breathing deeply and slowly did nothing to lessen the humidity’s punch. A sane woman would return to her air-conditioned hotel room, change into something cool and spend the rest of the evening at the bar. However, she’d spent the day being seduced by vendors and others, and its highlight had been the inevitable rubber-chicken lunch. Blech. If she didn’t go for a run, didn’t lose herself in a routine of monotonous rhythm and straining muscles, she’d never be able to sleep.

She had to do what it took to at least briefly silence her restless mind.

Don’t. You know better than to go there.

Because ordering herself not to think those particular thoughts seldom worked, Raine stepped out of the car, closed and locked it. She checked to make sure her designer athletic shoes were tied then faced the entrance to the night-darkened preserve. She hadn’t worn underwear because—all right, because she didn’t feel like it and wouldn’t be seeing anyone.

Outside the city limits, the nature preserve seemed a world apart from the hotel where the convention she was attending was being held. There were no skyscrapers, no sounds of vehicles or people. The swampy vegetation would still be there long after she was dead. She meant nothing to anything that lived and grew here, so why, suddenly, did she want it to embrace her?

Although her career with Coello Convention Centers took her all over the country, she’d never been to Orlando, Florida. When she’d asked at the hotel gym about an outdoor place she could go for a run, the tight-bodied young woman with silicone breasts had frowned and tried to talk her into going to the local college and using the track there. When Raine had explained she wasn’t interested in having to jockey for space, the woman had said that although funding for the preserve had gone down, she believed the public parts were still well lit.

When she’d learned the Fish and Wildlife-maintained sanctuary boasted several miles of graveled pathways that skirted a mangrove swamp forest, Raine had been intrigued. Not only did she want to show Ms. Fake Boobs she had what it took—whatever that was—she also craved nature. The possibility of solitude had become a hunger.

Hunger? If she could have anything she wanted in life, what would it be? Raine pondered that question as she finished stretching then took off down the narrow path at an easy pace. No surprise that the answer didn’t come immediately. After all, she’d conditioned herself not to lust after what she couldn’t have, what she could barely name. Her life was all about structure, not whimsy.

Freedom. The unexpected word floated on the hot breeze, stroking her already sweaty throat and bare arms. Freedom from responsibility, from self-control, even.

The thought of turning her back on those things lapped at her. Insane as it was, she half believed this place would give her what she craved. Veering onto another path, she wrapped the fantasy around herself. Lush vegetation swallowed her, and she became part of it. Felt something ethereal.

The moon was full, but trees blocked most of its light. If not for the muted but closely spaced ground lights, she might not have stayed on the path. Being on unfamiliar turf wasn’t the most intelligent or responsible thing she’d ever done, but in her mind—her fantasy mind—her long, lean legs, slender arms and toned hips no longer belonged to her.

Tonight, surrounded by chirping insects and whispering birds, she became muscle and bone and rejoiced in the feel of her small breasts jiggling. The primitive creature who’d taken over her mind existed on an elemental level. This she-animal had never touched a computer, knew nothing of profit and loss, frequent-flier miles, multimillion-dollar budgets and the stress that gnawed at stomachs and gave people high blood pressure.

She-animal breathed, ran, sweated. She-animal belonged here, knew what creatures lived in the ripe savage land and could sustain herself on what she harvested or killed. She-animal was Tarzan’s equal. And when hot need bit at her, she-animal fucked.

Images of a naked, physical female creature sniffing around a man like a bitch in heat flamed her imagination and dampened her red nylon shorts. Someone might cage the wild animal or fasten a chain around her neck, but the creature she’d become in her mind would growl and pace, presenting her ass to any male who came within sight. If freed, she’d jump any and all members of the opposite sex, biting, scratching and whining until some stud mounted her and drove her to the ground.

Before the civilized being she hadn’t completely silenced could push to the forefront, Raine sensed another presence. She stopped and rose onto her toes, looking left and right while testing the air for a new scent, but the rank odor of things rotting blocked everything else. Any other time, she would have reached for her container of mace, but she-animal still commanded her mind, her muscles.

If anyone attacked, she’d retaliate. Besides, because she needed the thrill, the newcomer would be a man. Put here by whatever force was sending her messages.

Footsteps resembling the sound of beating drums became more distinct, forcing her to think through her options. Someone was coming up behind her, running fast, also wearing athletic shoes. The stranger’s footfalls were heavier than hers. A man.

A man for a bitch in heat.

“Stop it,” she muttered.

Her throat filled, and she nearly howled. At the last moment, fear of the savage she’d almost become washed over her to strangle the cry. No matter how strong the wilderness’s lure, she hadn’t become primitive—not completely, anyway.

As a child, she’d enjoyed entertaining her cousins and the neighborhood children with tales of exciting adventures, but her parents had discouraged her fascination with fiction. Make-believe had no place in their carefully structured and orderly lives. Eager to please her undemonstrative mother and father, she’d bought into the fast-track-to-success edict and forged a role for herself in the family-owned corporation.

It was insane to think she could become an animal.

Then what am I? she asked herself as she started running again and tried to match the speed of whoever would soon overtake her. When the path straightened, she glanced over her shoulder.

Male. Large. Naked except for dark shorts and shoes.

Unnerved, she reached in her front pocket for her mace, only to discover she’d forgotten it. Seriously? Of all the times to have forgotten! The night-man’s tennis shoes slapped the gravel. She heard his quick breathing and imagined sweat rolling off him and onto her own flesh. She glanced back again.

Stud. A mate for a bitch in heat.

Unnerved and excited, she veered to the right and nearly stumbled off the path. By the time she’d regained her balance, he’d caught up to her. She moved to the side. Instead of passing, though, he slowed down so that they ran side by side. His pace was smooth and effortless, as if he were a cheetah born and bred for movement. He didn’t acknowledge her presence.

Doing the same, she nevertheless took in everything she could about him. Although the ground lighting barely reached beyond his legs, she had no doubt he was physically fit. This man—this running animal-man—was all muscle. There wasn’t an ounce of extra flesh on him. Whatever he did for a living demanded a body in prime condition. He was tall, well over six feet, maybe thirty but not much beyond. His hair was full and dark, a little long and caught to his skull by sweat. She couldn’t see his features.

Running with him felt like life. Like rhythm. Perfect. Smooth as fine wine. Ancient and new, timeless.

Caught in need, she stopped thinking about her pumping legs, her feet, the path, the vegetation so thick it could swallow both of them. Instead, she became part of his strength. She gave him her blood and breath.

Their arms pumped in unison and their lungs heaved in time. Although they didn’t touch, she felt his heat on her skin. It traveled through her veins, met with her arteries, flowed into her skull, fingertips, belly and between her legs. Mostly there. Her clit tightened. Awake and hungry, her pussy demanded satisfaction and her imagination came alive.

Fuck me. Lay me down, pin me to the ground, and fuck me. Destroy civilized-woman and let she-animal roar.

Vonna Harper doesn't know and she has given up trying to find the answer. It's enough that many readers are drawn to what some call the dark side. All she asks is that readers understand she writes fiction--a brand of fiction she finds fascinating.

Vonna has lost count of the number of books, novellas, and short stories she's written. What she has no doubt of, it's a hell of a ride.

Share what you thought about Heat's Night and earn reward points.