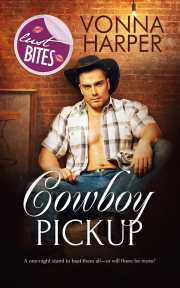 Friday night at the Sidewinder bar is exactly what rancher Loria needs. Nothing like some cold beer and hot men. Then a tall, lean, just-off-the-range wrangler in a Stetson walks in and makes his move. She accepts. Okay, more than accepts. Gives as good as she gets.

To hell with their appreciative and half-drunk audience. To hell with possible consequences. Loria is going to ride her cowboy, repeatedly. Of course, there’s the matter of his determination to beat her to the punch, not that she minds. Against the bar. On top of the table. Mare and stallion.

The deeds done, there’s nothing left to do but go their separate ways, right? Maybe not, because sometimes a one-night stand has an unexpected twist.

“There’s going to be hell to pay if I don’t get laid tonight.”

Laughing, Loria punched her friend Crissy on the shoulder. “Oh, you’ll get your itches scratched in here, no doubt about it.” She eyed the warped and splintered door to the Sidewinder bar. “Same as me.” Hopefully.

“You’d better after all the work you went to clearing the decks so you could come here, to say nothing of pouring yourself into those jeans. Are you going to be able to sit in them?”

Loria resisted the urge to tug on the jeans’ crotch. “If things go according to plan, I won’t be sitting.”

“Got ya.” Smiling broadly, Crissy reached for the door handle. “Let’s go meet us some cowboys.”

From the moment they’d pulled into the gravel parking lot, which was clogged with pickups and stock trailers, the sound of country and western music had reached out to play with their senses. Hearing honky-tonk sent energy pounding through Loria, not that she needed a reminder of how long it had been since she’d felt a man’s body pressed against hers.

Eager for the night to begin, she hip-bumped Crissy aside and opened the door. Guitar twangs and a deep, nasally male voice singing about hard drinking and hot women all but knocked her back on her boot heels.

“Sure is. Looks like all of the wranglers are back.”

Feeling as if she were about to enter a wild horse enclosure, Loria went inside. Even before her eyes fully adjusted to the blood-colored beer signs shining at her from the walls, her body told her the Sidewinder was packed. The central Oregon town where she’d lived for her entire life had a couple of newer, cleaner and better maintained watering holes, but the Sidewinder was where the sprawling county’s real cowboys hung out.

Which was one hundred percent why she was here.

Pulling in the aroma of male, denim and leather, she stepped onto the scarred wooden floor. The bar stools, as well as the tables, were occupied by mostly lean-assed men. Although she caught sight of a few women, she barely nodded at them.

Cowboys watched her and Crissy. Sucking in her stomach, she concentrated on making her ass sway. Okay, so her physical lifestyle called for short nails, calluses and a permanent farmer’s tan, but there were benefits—specifically, a firm yet feminine body.

She hadn’t worn a bra under her pale-blue, long-sleeved snap shirt.

“A tad bit of testosterone in here,” Crissy almost yelled into her ear. “Feel it?”

“Feel? I’m practically swimming in it.”

“It’ll get even better once we have a drink in us. Beer or whiskey?”

“Doesn’t matter,” Loria said as they approached the glass and bottle cluttered bar. “Ten to one we won’t have to buy.”

“You think I’m going to take that bet?” Crissy laughed. “Damn, I swear I could take all of them on.”

Loria waved a finger at the bartender then ran her gaze over the packed space. In daylight, the Sidewinder was downright depressing. However, tonight was a different story. Three couples gyrated on the small dance floor. They were practically fucking standing up and fully clothed, arms around necks and pelvises locked together. As she watched them, heat began at the top of her head, slapped her cheeks, burned her neck then swept over her breasts with their already hard nipples.

Three weeks without sex had turned her inside out.

“What’ll it be, ladies?” the bartender asked.

Recognizing Harry who was the part-owner, Loria asked what beer was the coldest.

“It’s all good, you know that,” Harry shot back with a fake-injured tone. “That’s what you’re here for, right? The booze.”

Loria, Crissy and Harry laughed at the joke. Then before the women could place their orders, a couple of tall, slim young men sidled up to them.

“You fillies shouldn’t be wasting your hard-earned money tending to your thirsts when we’re around to spoil you,” the taller of the two announced. “We just got paid. No better place to spend it than on a couple of fillies.”

“I appreciate the compliment,” Loria said, “but I’m hardly a filly. For the record, I turned thirty last month.”

“Seriously? You don’t look it.”

She tilted her head. “Speaking of age, how old are you?”

“And I’m twenty-nine and holding,” Crissy said. “However, I think we can make this work at least for one evening.”

“For sure.” The man draped his arm around her shoulder.

The other man started to do the same to Loria.

“Sorry.” Loria pushed his arm away. “I’m not that easy. Besides, you smell like a horse that’s been rode hard and put away wet.”

“If you want cologne and manicures,” the man said, “you’ve come to the wrong bar.”

“Oh.” Loria smiled to soften the impact of her words. “I’m in the right place. I’m just not done checking out the merchandise.”

Grumbling something that came close to getting him a knee between his legs, the man stalked off. Loria had never seen him before, not that she cared.

The man who was still hanging onto Crissy—he said his name was Brent—offered to add Loria’s beer to his tab. She said yes, and when it was delivered, she took a long swallow. That done, she slowly, thoroughly studied the room.

Telling the man who’d tried to come on to her that he smelled like a sweaty horse applied to most of those in the Sidewinder tonight. These were the real deal, wranglers with bowed legs and hair permanently creased from their Stetsons. Squint lines had been carved deep into the corners of their eyes. Their hands and forearms were scarred from barbed wire, and she had no doubt that most bore old broken bones and fresh bruises, compliments of unruly horses and dim-witted beef cattle. They spent quiet, lonely weeks on the county’s high desert ranges keeping an eye on said cattle.

Well, one of those cowboys was going to get the chance to spend the night with her.

Her jeans trapped her pussy, and her thighs felt as if she was wearing a girdle, but that wasn’t the only reason she was so aware of her body. More than a handful of gazes were taking note of her braless state.

Vonna Harper doesn't know and she has given up trying to find the answer. It's enough that many readers are drawn to what some call the dark side. All she asks is that readers understand she writes fiction--a brand of fiction she finds fascinating.

Vonna has lost count of the number of books, novellas, and short stories she's written. What she has no doubt of, it's a hell of a ride.

Share what you thought about Cowboy Pickup and earn reward points.