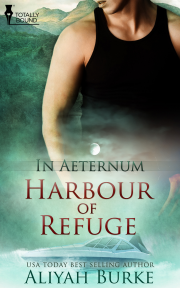 Book 2 in the In Aeternum series

What happens in Monte Carlo stays…with you forever…well, if you're one of the lucky ones.

Enzo Cassano is the driver of a powerboat team, used to the fast life and all it includes—women, parties and popularity. Until the race in Monte Carlo when he meets a woman who is unlike any he's met before. Her small town values and almost innocent ways charm him beyond everything. He discovers, however, that beneath her exterior she's very firm in her beliefs and won't budge.

Halyn Jennings maybe from a small town but she knows a player when she sees one and Enzo is definitely that. She doesn't mind—she still likes him and enjoys spending time with him, well aware that what is happening between them is most likely temporary. She's not the supermodel type he's accustomed to being with.

Enzo's life is turned upside down by an unexpected visitor from his past, he has to learn to accept racing isn't everything and not everyone wants to be the centre of attention. Halyn's own past comes to light in a most harsh revelation and he discovers things aren't always so easy. Will he be able to find a way to break back through her barriers and prove to her she's the one he wants, for forever?

Cheers, screams and more saturated the air. Enzo Cassano took it all in stride as he made his way off his powerboat to head up the pier and through the marina. Not even the explicit offers slowed him, although they made him smile and shake his head. Exhaustion owned him, yet he knew it would be a great night. Amazing sex, slumber in a nice bed and an added bonus of not having to get up before the ass-crack of dawn.

He gave nods and high-fives to his team before his gaze landed on the woman he’d been looking for. She wasn’t part of the team, but she was waiting for him. A wide grin spread across his features as he took in the dark-skinned beauty. Her hair had been pulled back since they’d taken pictures on his boat, but she still wore the same suit—an orange strapless bandeau swimsuit top, twisted at the centre. No, not quite orange, a mix of orange shades, pale peach to corals and some in between, blending in with one another and contrasting amazingly with her skin. He knew the bottoms matched in hue, were low rise and knotted at the sides. She looked damn good in them. Right now she wore a white sarong around her waist.

He had a certain fondness for this woman. Sexy as hell and southern. He loved her accent. She was almost family, her best friend Jaydee was now his relation, she’d married his older brother—the middle brother—Gio and by default it sort of put Lexy in the same boat.

He’d missed her earlier after the photos had been taken, when she’d gone shopping. A wolf whistle escaped him as he leant back for another look at her. She waited for him to lift his gaze.

"Stop looking at me like you want to eat me."

He waggled his eyebrows. "Not my fault you are bellissima."

Lexy snorted and took off one shoe for a moment before sliding it back on. "Your charm, while adorable, is completely wasted on me, Enzo Cassano."

"Can’t blame me for trying." Had she ever given him the slightest hint his advances would be reciprocated he would have pursued her, but for her it was all about fun—he knew it was hands-off.

She laughed and he slid an arm around her, brushing a kiss along her cheek. He thought about how different she was from his sister-in-law, Jaydee. The women were complete opposites yet steadfast in their affection for one another. He cared deeply for them both. Jaydee had relaxed only marginally since her marriage to his brother, but Lexy had fun every time he saw her.

They progressed up the pier, chatting about work and family. "So tell me, Lexy. How is life treating you?"

"We’re busy. Which is why I thank you so much for this. I needed it." She rubbed the back of her neck and he fought off his urge to offer to do it for her.

"Needed what?" A new voice broke in.

Enzo smiled as he recognised the speaker. His eldest brother, Valentino. "You made it."

He turned to the left and froze when he saw him. Yes, his brother had arrived, but he stood out like a sore thumb on the marina. While others wore summery attire, Valentino Cassano was standing there in a three-piece suit.

"A suit? Christ, bro. This is Monte Carlo, where are the shorts?" Even as he asked the question he knew the answer. His brother would wear jeans on occasion but most of the time, if he was going out, he wore suits.

"You know your brother is cranky and stodgy, Enzo." Lexy leaned against him and propped her arm on his shoulder. Amusement laced her southern tone.

Enzo felt, as much as saw, his brother tense. Hazel eyes flicked between them, disapproval filling them.

Enzo watched her walk away. "Damn, that woman is—"

"Are you two dating?"

He frowned, taken aback by the question. "Me? And Lexy?" He wished.

His hazel eyes were unblinking and direct. "She is here in Monte Carlo with you."

"I mean no to the dating part." Enzo began walking. "She is here because I invited her."

As they neared the car, the crowd parted and he saw Lexy waiting, looking at something on her phone. He reached out to his brother and halted him. "Be nice to her, we’re going to a party."

His brother didn’t reassure him. Hell, he didn’t say anything. Lexy, however, had apparently overheard. She gave him a grin. "I appreciate you looking out for me, Enzo, but your brother is not anything to concern yourself with. He and I have our own way of communicating. He snarls and snaps like a rabid dog and I sweetly remind him I am a vet with plenty of access to ketamine and more tranqs, not to mention numerous barbiturates I could choose from." A shrug. "Wonderful stuff."

He swallowed his increasing amusement, but couldn’t help smirking when Valentino glowered further.

"Lighten up," he told his brother in Italian. "Let’s go party."

They entered the waiting car. Lexy tucked herself between them, the photos of her on his boat in her hands. Behind her, he spied Valentino and his scowl. If he didn’t know any better, Enzo would say his eldest sibling had a crush on Lexy. It was a fact he couldn’t be bitter about, for in his opinion, it was about damn time someone got a reaction from Valentino. He’d been a bear since the fiasco with his ex-wife. Laughing silently at the thought of what Lexy would do for—and to—his brother, Enzo leant forwards and went through the photos with that very woman.

Share what you thought about Harbour of Refuge and earn reward points.

I write down how they tell me they view this person. What they equate their skin color to. If it’s a nut brown or the color of brown sugar—light, dark, or even melted. Personally, I’m a very visual person so when it pops in my head that way, it’s easy for me to see and picture what the hero/heroine does when they are letting me know.
As I stated before I will have a general idea of what my—let’s say hero—looks like. For example: tall, muscular, former military. Then it goes from there and I get the heroine to fill in the rest of the details.

Other books in the In Aeternum seriesView Series Page