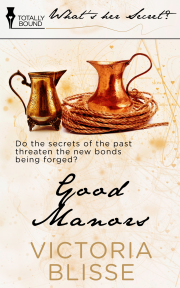 Mallard Hall plays host to games of submission and Dominance for one unique couple, but do the secrets of the past threaten the new bonds being forged?

India Grace, a respected journalist, is assigned to the estate for a behind the scenes look at how it runs. It is the last place in the world she wants to be. Back when she was young and naïve she took a photo of old Lord Mallard, which led to her success and his downfall. She carries the guilt with her to the location and it’s constantly in the back of her mind when she meets the hall’s latest owner, Xander Patrick.

Xander’s father died when he was only thirteen, and he doesn’t hold many good memories of him. He helped his mum build Mallard Hall back up, and since her death struggles to keep it going single-handedly. The last thing he needs is a meddling journalist poking into estate business, especially when the meager profits are mysteriously disappearing.

The two try to keep their distance but find themselves drawn together in many unexpected ways. A meal leads to an investigation of secret passageways and from that India and Xander explore their attraction, using different rooms of the hall for their kinky games.

In the end India’s secret will have to come out, but will it bring the couple closer together or tear them apart?

Dead, glassy eyes stared up at me from a face inhumanely pale. I recognized the corpse of Lord Mallard. On top of him a young, pert prostitute writhed, her long red nails set on his flesh above his unbeating heart. She was in the exact position she had been in when I’d snapped the lord in flagrante ten years ago.

There was a strange hum on the very edge of what she could hear and when I noticed the noise it grew louder and more recognizable. It was a human scream. I looked back from the prostitute’s face—her eyes flat and dark, her red-ringed mouth open in fake pleasure—to the body of Lord Mallard. Fingers of ice gripped my heart, my mouth dried, I felt an overwhelming dread and when my gaze ended on the face of the corpse I saw its mouth was opened and the scream was coming from him. His eyes snapped open, his visage full of pain and accusation.

I didn’t have the nightmare every time I slept, like I had in the early days, but it still cropped up with regularity. Some details changed but the dead lord always accused me and I would always wake up in a cold sweat, heart thudding and my soul weighed down with guilt.

I shook my head and ran my fingers shakily through the tangle of brunette locks. It was six-fifty, ages before my alarm was set to go off.

Mondays were office days. Most of the time I worked from home or I’d be out on assignment but every Monday I went in to the Good Manors offices to attend meetings and pick up my latest project. Team player was definitely not my middle name but the guys in the office weren’t all that bad. In fact I kind of looked forward to going in to see them.

“I was motivated by the image of your gorgeous smile, Brendan, and how today I might just get to slap it off your annoying face.”

“You wound me, India Grace.” Brendan flopped his long fingers back onto his forehead in a dramatic gesture.

“Not yet, but I’m working on it.” I flexed my hand and pulled it into a fist. Just then Maxine, the lead editor, walked past.

“Ah, India, glad you’re here. We can get on with the meeting. Lots to get through today.”

“Right, Maxine, just on my way to the boardroom.” I dropped my fisted hand to the side of my body and when she breezed past I poked my tongue out at Brendan, who smirked in reply. He’d won that word battle but there would always be next week. He was like an annoying younger brother—mostly I wanted to kill him but if anyone else dared pick on him I’d go straight for their jugular.

Angela preened. She was the fashion and beauty editor of the magazine and never had a hair out of place. She could have been chased by a lion or have shagged with abandon and there wouldn’t be a crease in her perfect outfit or a smear of lipstick to show it.

At first, I’d thought she was being catty when she commented on my clothes. But I’d soon found out it actually meant she liked me. I had a rather unique style. Bright clashing colors in layers almost always matched with whichever bright colored ballet shoes came to foot first. That day they were scarlet red. People who committed fashion crimes would be roundly ignored until they changed their erstwhile ways. Angela only commented on the fabulous, at least to the wearer’s face.

Maxine swooped into the room, knocking the door shut and throwing a file full of paper down onto the table by her chair.

“Everyone here? Yep? Okay, we’ll get started.” She didn’t pause to let anyone comment, just ran into her spiel without stopping. Maxine was like a teen fangirl when she got going—she barely stopped for breath even when asking someone a question. She paused for the barest second then talked over the answer. If you didn’t know what to expect it was hard to deal with her unique approach to leading meetings.

Once, we’d got this new guy, Dominic Riger. He’d worked for several of the well-known high society mags and the office had been buzzing about having him with us. Unfortunately he’d only lasted one meeting with our Maxine. He was a quietly spoken well-mannered guy. Wore tweed ironically and styled his hair and mustache like a colonel in a World War I flying squad. He was smooth, he was sophisticated, but he hadn’t been able to deal with Maxine and her tank-like approach to, well, everything.

He’d run out only seconds after trying to make a point and had never been seen again. The way his coat had flapped around him like the wings of a fluffed up baby bird brought a smile to my lips every time I thought about it.

I was used to Maxine’s ways. People had to have a bit of a thick skin to survive at Good Manors. Her standards were exacting and her manner less than approachable. We were all a bit kooky and that’s what set our magazine apart from the others. It was not the same old, same old.

Maxine was a creature of habit so I knew I didn’t have to pay attention to her jabbering for a good while yet. It wasn’t like I had a great input anyway. I was only here to get my assignment and go. Why Maxine couldn’t just email me about it I didn’t know. Another one of her idiosyncrasies, getting us together so she could make sure we were doing things just the way we should. The way she wanted us to.

When Angela blurted out a quick, “On it, boss,” I knew it was time for me to pay attention.

“India, you were meant to be going to Bartley Manor but the gales the other night blew the roof off the guest annex, so we’re sending Tom from features to cover that. I’ve got you a spot at Mallard Hall at short notice.”

My mouth went dry, my heart raced. That was the one stately manor I couldn’t possibly visit.

“But, Maxine, I’ve had no time to research it,” I exclaimed.

She slowed mid-sentence and looked at me with something approaching contempt. “I know, but The Day in the Life article is key and you need to go somewhere. Research is overrated anyway.”

“No buts, India. You’re going. You’ve got the rest of the day to look it up.”

And that was the end of that. No way could I interrupt again and if I did I was sure she’d simply ignore me anyway. After the meeting I commandeered a computer to look up Mallard Hall. Even typing the words made my stomach roll. I had to find a valid excuse that made sense to tell Maxine because I simply couldn’t go and I couldn’t tell her why that was.

I’d ruined a man’s life, not just his life but that of his wife and son. I’d never be welcomed in that place. Never. As I checked out the Hall I noticed it had a snazzy new website. No longer was it just a hall—there was a farm shop, house tours, beautiful gardens and a gift shop. It had become a tourist lure.

I went to all kinds of country homes, some successful, overflowing with visitors who filled the coffers, others powered with family money, private except to me and the Good Manors readers. I even went to run-down places, ruins or close to, abandoned by their once owners and left to decay. I’d thought that would have been the fate for Mallard’s.

I looked for connections back to the Mallard family but I couldn’t find any. Flicking round, I found a promotional snippet that mentioned who was in charge at the hall.

Xander Patrick has worked passionately and single-handedly to build up the once rotting hall into a thriving visitor attraction. He introduced the farm shop in 2010, and the famous Castlemilk Moorit sheep in the last year. These innovations set Mallard Hall on the road to success.

Maybe I’d be okay. It sounded like some venture capital fellow had taken over and picked up the ruins of the old home and made it into something thriving once more.

“Oh, India, you’re still here, good. I meant to give you this. It’s instructions from Mallard Hall. How to get there, who to find when you arrive, that kind of thing. I’m looking forward to seeing what you write when you get back.”

And off Maxine went again, her high heels clacking. She wore me out. I wondered if she ever slept or if she was just go, go, go, twenty-four-seven. I wondered briefly if she had a boyfriend but no, she surely didn’t have time to slow down enough to play the seduction game. I picked up the fat brown envelope and headed for the door. Apparently I was going to be revisiting my past, and I needed to pack.

Haunted by a photograph that she took years ago, India is shocked to find out she is being sent by her employer, Good Manors Magazine, to Mallard Hall. The very estate that belonged to the man in th...

India Grace is a rare breed, a journalist with morals and a personal code to only write the good things about the stately homes she visits and reports on. This code came into existence following a har...

Share what you thought about Good Manors PRINT and earn reward points.