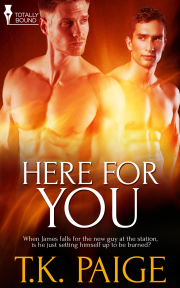 When James falls for the new guy at the station is he just setting himself up to be burned?

Welcome to Deacon, Oklahoma. Straight population—seven hundred and ninety-six. Gay population—James Hara. Except it really isn’t that bad, because when he came out to his hometown, something wonderful happened. They still loved him…most did anyway. The only problem is the lack of a dating pool.

Then he meets the new firefighting volunteer and he has a bigger problem. Mason is gorgeous, friendly and straight. Soon James is doing his best not to fall for his new friend. Hard to do when Mason is everything he dreams of, with his humor and flashes of vulnerability.

But after a set of stressful events, he finds that maybe it is not impossible after all. If he can be patient with a man wounded by his past.

Reader Advisory: This book contains references to past sexual assault.

“James, quick it’s the Tardis! You better run for it!”

I turned and looked at Tosh, my best friend since college, like she had lost her freaking mind. Because apparently she had.

I raised one eyebrow at her, a skill I had and she didn’t—and didn’t she just hate that.

“Don’t look at me like that! The way your eyes were glued to the new guy’s ass I figured that Doctor Who was the only thing that might get your attention. ‘Cause I am not mopping this floor again if you drool all over it!”

I closed my eyes. I really didn’t want to know. “Who else?”

I looked at her horrified. “Sam saw! I’m invisible to him, he never sees what I do unless I’m in fire gear at a scene. I could dance naked for his attention and he still wouldn’t see me.”

“He’s afraid that you are going to dance naked for his attention and that’s why you’re invisible to him. As if,” she said, her pixie face twisted in disgust. “Even you have better taste in men. Unless you’re even more hard up than I thought.”

“Oh give it a rest, James. It was once, and it was over eight fucking years ago!”

“Yes, but it’s the reason we wrote the freaking handbook so it must be mentioned occasionally so we never forget the horror of that night.”

“Point taken.” She grimaced with the memory.

I waited a few minutes, concentrating on organising my volunteer fire gear in my locker after checking everything over. Checking very carefully. I really hate pain. And burns are the worst. Then I gave in and asked, “I was drooling that badly?”

“If Kent had looked at me like that, I would be pregnant again.”

“I thought you were on birth control pills?” I cocked my eyebrow at her again, just because I could.

She smirked at me. “Yes, and it wouldn’t have made a bit a difference. In fact, your eye fucking was so intense he could be preggers now. You might want to go over and introduce yourself to your baby daddy.”

I rolled my eyes at her.

“Seriously, James, you need to go over and have Kent introduce you two while Sam is cleaning the brush truck. You might be able to make a good impression on him before Sam warns him about your nefarious plot to convert all the good Christian boys to gayness.”

“As if I want Sam’s nasty ass. If I could convert anybody, it would be your brother Kyle. He’s a fellow nerd and he’s pretty hot.” I laughed at her.

She brightened up. “Really? His last break up was so bad he might go for it. Remember when he tried to cheer you up by saying if he went that way he would be all over you?”

“I think that was more of a threat to your mother because she was trying to fix him up again,” I said dryly.

“Yes, and he about choked to death when Mom said that was fine with her, but she thought you were too good for him.”

“God, I love your mother!” And I did. I loved that whole family.

“And you are stalling. Pull up your panties, you cross-dressing freak, and go over there.”

“It was one Halloween, woman, give it a fucking rest!”

“And if you get your ass over there in the next minute, I will swear never to say one word about it to the new guy!”

I wasn’t stupid, it took me less than five seconds to get over to the pump truck.

The guy was talking with Kent about the types of calls our little rural fire department got and about how often it happened. I stood a little ways off from them, politely waiting for Kent to introduce us when they finished up. And if I took the opportunity to covertly look the guy over, who would know?

T.K. Paige picked up her first book to read around the age of four and hasn’t stopped since. She discovered the M/M genre in August of 2012 and an addict was hooked.

If you see her and she is not reading, then she is thinking about the books that live in her head. It doesn’t matter what else she is doing, it is guaranteed half her brain has a plot running through it.

A stay at home mom for more years than she would like to think about, she is lucky enough to be married to a wonderful guy who encouraged her to write throughout their years together. Then when she finally did it and she told him what she was writing, he turned only slightly green and asked “Do I have to read it?” Apparently, he had dreams of her being the next Urban Fantasy sensation with her taste in movies… We won’t tell him what she watches when she is alone all day folding laundry.

She would love to hear from readers through her email and Facebook page.

T.K. Paige’s first book was handled wonderfully, nurturing the characters and combining tragedy of past days with the burgeoning love of the present.

The characters were wonderful, from t...

This is a beautiful story of friends to lovers, towns sticking together for their own a little drama and mystery and some sweet loving man sex. It’s a great story for those times you’re looking for a...

Share what you thought about Here For You and earn reward points.