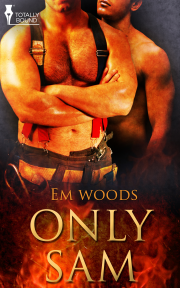 When a restaurant goes up in flames, will a spark of love rise from the ashes for a chef and his hero?

When chef Dylan Brookes finds his restaurant engulfed in flames, all he can do is watch his dreams turn to ashes. Shock, hurt and disbelief leave Dylan vulnerable to both the man who wants to love him…and the one who wants to kill him.

Fire fighter Sam Carter has been frequenting the same small restaurant for a year, trying to work up the nerve to ask the chef out on a date. When Dylan's Omni burns to the ground from foul play, Sam steps in to help.

Now the question is…will his efforts be too late?

Publisher's Note: This story has been previously released as part of the His Hero anthology by Totally Bound Pubilshing.

How could this have happened?

Dylan Brookes kept his kitchen meticulously organised. He ticked off things in his head. The espresso machine, mixer and processor had been unplugged before he left, his stainless steel counters had been wiped down, and the garbage bags were always changed whether they had been used or not. Maybe it had been a short in the wiring behind the walls?

Though the sirens blared in the parking lot, they were still unable to drown out the snap and pop of the flames licking from the kitchen window of his upscale organic eatery, The Omni. Dylan sat on the bumper of an ambulance, a stiff hospital blanket wrapped around his shoulders, and watched his life going up in smoke...literally.

Dylan glanced up and took a shallow breath, trying not to wrinkle his nose at the acrid smell of smoke and burning paint in the air. His supposedly silent business partner and ex-brother-in-law Mike Eagon jogged up to him.

Mike patted him absently on the shoulder, his gaze flickering between Dylan and what remained of the restaurant. “You okay, man?”

When Dylan saw him like this, with his eyes a deep, meadow green, concern etching tiny lines between his brows, it was easy to see what his sister, Jenny, had seen in Mike when they’d first met.

“Yeah, but I don’t think Omni will be.” Dylan’s gaze drifted back to the smoking building. One fireman stood with his hose on full bore, trained at the ground around the restaurant, and two more had theirs pointed in the windows. Dylan’s heart broke.

There had once been the most beautiful stained glass window depicting a sensual male form entwined in the bark of the Tree of Life. It was his trademark and had been gifted to him by Jenny shortly after he’d opened the restaurant with Mike.

“We’ll build it again. Maybe bigger next time, eh?” Mike faced the pile of rubble, his head tilted as he looked at the damage.

“Bigger?” Dylan couldn’t believe his ears. His eatery had been perfect. “I liked the size of our place.”

“It’s just some bricks and paint, right?” Mike spun around, his eyes alight with whatever idea had struck next. “Maybe make it an Italian restaurant!”

Dylan’s heart thundered. And that was a prime example of why she’d divorced him. The guy had no sense of what emotional attachment meant.

“What are you going on about? Are you kidding me?” Dylan’s voice rose. “It isn’t even a pile of cold ashes yet.”

Mike waved a hand absently. “But we have to start planning, right? Jenny could help.”

“I’m not asking Jenny to come back to change my restaurant.” Dylan didn’t know what the fuck was going on here, but he knew that for certain.

Mike paced in front of Dylan, occasionally stopping to stare at him as though he didn’t understand why he was resisting. “This is our chance, Dylan. We could go big time with this.”

Big time? Dylan shook his head as he stood. “I can’t talk about this now.”

“Never is even better.”

“Dylan, don’t be an ass.” Mike gripped Dylan’s shoulder as he passed. “This is our opportunity to do it right.”

His nerves frayed beyond measure, Dylan snapped. He threw Mike’s hand away from him. “It was right!” He couldn’t help the crack in his voice or the tremble of his hands. He was a wreck. Omni had been his life...his dream. The one he’d managed to hang on to, anyway.

“Is there a problem here?”

Warm and rough as whisky, a masculine voice slid down Dylan’s spine and bee-lined right for his cock. When Dylan turned, he blinked in confusion. Initially, he couldn’t see much detail through the soot. The firefighter’s hair looked light brown, maybe blond. It was those green eyes staring at him from an ash-darkened face that sent him into a near-pant.

Nodding, Dylan pointed behind the man. “My restaurant burned down.” Oh, way to go. State the obvious, Dylan. It was all Dylan could do not to roll his eyes at himself.

A tiny quirk to the firefighter’s mouth drew Dylan’s gaze like a star-struck teenager. He couldn’t help but stare at the most perfect set of lips he’d ever seen—ones he saw every night in his dreams.

Sam was one of his regulars. And Dylan spoke to him every time he came into the restaurant, regardless of what he was doing. More than once his sous chef had glared when Dylan had stepped away from the rush to visit.

The small tilt to Sam’s mouth turned into a gentle smile under Dylan’s gaze. “Yeah, I noticed that.”

“Seriously?” Mike stormed past them, back towards his car. “We’ll talk later.”

Dylan clenched his jaw to keep from yelling after the bastard, but it turned out he didn’t need to worry. A police officer stepped in front of Mike, holding up his badge. “Mr Eagon?”

Mike swerved around the officer, never breaking stride. “What?”

“You’ll need to come with me. We have a few questions for you.”

Mike turned back to the officer, his face pale. “For me?” He flung his hand in Dylan’s direction. “It’s his fucking restaurant.”

“We’ve already spoken with Mr Brookes.” The measured tone of the officer’s voice combatted with the flick of his thumb on the restraint for his holstered pistol. “Please come with us.”

Dylan shook his head, more to clear the haze muddling his brain, then he felt Sam nudge him to draw his attention. “This fire wasn’t accidental.”

“It blazed too hot, too fast. An accelerant had to have been used.” The man wiped his face with his glove, smearing soot across his forehead. “Name’s Sam, by the way.”

“I know.” His heart pounded as he turned back to watch Mike.

“Thought you might not recognise me under all this.” Sam waved a hand over his face.

“Hard not to recognise those eyes.” Dylan cringed as he darted a quick look at Sam.

Someone closer to the fire yelled for Sam. He lifted a hand in acknowledgement then caught and held Dylan’s gaze for a moment longer than necessary. “Better get back to work, then. They’ve still got a small flame in the middle of the building.”

“Yeah. I...I need to sit down.” Dylan backed up until his legs hit the bumper of the still-wailing ambulance, then he sank onto the cold metal floor inside the door. Wasn’t accidental. His beloved cafe had been burned down on purpose.

“I said I didn’t light the fucking place on fire!” Dylan looked over at his business partner who stood screaming in the face of a man dressed in street clothes. Whatever the other man responded with made Mike’s eyes bulge while his face bordered on purple and his whole body shook. Mike snarled something Dylan wished he could hear before whirling away and all but running to his car parked across the street.

Dylan shook his head as Mike peeled away from the scene. He shifted his focus back to the pile of rubble that used to be his precious Omni. Slumping against the doorjamb, Dylan sighed. He thought about the accusations from the police officer. Could Mike have done this? No. Dylan couldn’t believe that he would betray him and his sister that way. So who would do this to him?

3.5 Stars ~ This was short, cute, and sexy. I would've preferred a little more oomph to the story, but the author did a good job with what she had. Sam and Dylan were ridiculously hot together, and w...

Share what you thought about Only Sam and earn reward points.