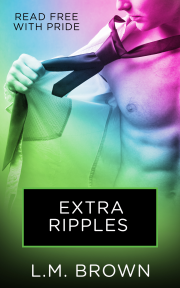 Centuries ago the city of Atlantis sank below the waves, lost to the world above forever. With the help of their gods and the indigenous mer people the Atlanteans survived on the floor of the ocean for many years, until the day they vanished.

Now the sunken city of Atlantis is home to the largest colony of mer people left in the world. Hidden from all by the magical sea dragons, they only venture up on land to mate.

Cursed by an Atlantean goddess, the mer people are slowly becoming extinct. Believing they are safe in the sunken city, they have no idea one of their own is inadvertently waking the sleeping gods and the original inhabitants of their city are merely biding their time until they can reclaim their land once more.

Enjoy this collection of a few extra scenes from Tempestuous Tides, the second book in the Mermen & Magic series. See the workings of the sunken city council, meet Lucas’ father, discover how Justin handled relationships as a merman hiding amongst humans, and catch up with Kyle and Finn as seen through the eyes of a pair of voyeurs.

New mermen! More mythology! More magic! And a race against a ticking clock to save the one you love.

The story is an entertaining read. Reco...

Anticipation builds throughout the story as Justin fights his destiny and expectation and passion builds as Lucas tries to change his mind. There's also a lot of spine tingling excitement building when...

Share what you thought about Extra Ripples and earn reward points.