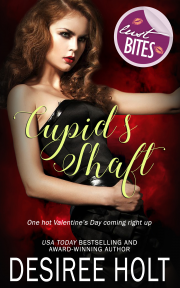 When Jessie Rawlins’ boyfriend dumps her just before Valentine’s Day, she ends up by herself at her isolated cabin in Maine with all the trappings for the holiday—including a bag of kinky toys—and no one to celebrate with. Then a snow storm dumps gorgeous Riley Malone on her front porch. Running from a broken relationship as well as a business partnership gone bad, Riley thought his good luck had run out. Until fate—and Cupid—strands him at Jessie’s cabin.

What woman hasn’t fantasized about having a sexy, handsome stranger come out of nowhere and rock her world? When Riley shows up on her doorstep, frozen half to death, Jessie knows exactly how to warm him up. But will Riley want to play along with the games she’d planned for her Valentine’s celebration? A night of hot, sizzling, erotic sex answers that question. But what will happen when the day for lovers is over, the storm is gone and it’s time for him to be on his way? Will he take a piece of Jessie’s heart with him, or will Cupid’s arrow strike them both?

Reader Advisory: This book was previously released elsewhere. It has been revised and reedited for release with Totally Bound Publishing.

Jessie Rawlins didn’t know what depressed her the most—the unexpected snowstorm that raged outside her little cabin, the calendar that reminded her another Valentine’s Day would be here tomorrow and she still hadn’t found a man to send her heart and senses into orbit, or the fact that she was turning into a sex-starved maniac. Snow had not been predicted when she’d decided to escape the holiday festivities and all the couples sucking face everywhere. But here she was, snowbound. How trite. Even her cell wasn’t working.

She looked around the cabin. Her hideaway. Her present to herself when she’d received a huge commission on a house sale. Real estate was hard damn work and she’d more than earned the bucks. It was just one big room, with a four-poster bed on one wall, a conversation grouping around the stone fireplace where a fire now blazed, a tiny kitchen and a small bathroom. But it was all hers and a great place to get away from things.

She kicked at the gym bag on the floor by the couch, swearing at her luck and raining curses down on every woman who’d be locked in sexual bliss on February fourteenth. Everyone but her.

Not that she wasn’t willing. She just couldn’t seem to find a man as adventurous in sex as she was. Strike that. As she wanted to be. She’d given up looking for love. She’d just be happy to find a man who could ring her chimes. But every man she’d met in the past three years had turned out to be a dud in one way or another. Or else they were always dumping her for leggy blondes with size two figures. She’d never even gotten to the point of hauling out her toys yet. Except for herself.

What’s wrong with me, anyway? Every man she’d started a relationship with sooner or later left her behind and, the next thing she knew, they had some bimbo on their arm. Her mother had always told her good things came in small packages, but it seemed no one else believed it.

She looked at herself in the full-length mirror opposite the bed and in slow motion removed her T-shirt and jeans, then her bra and thong. She turned from side to side, examining her body. Not bad. Thighs a little too heavy, maybe, ass a little fuller than she liked and her breasts not what anyone would call pert. But, all in all, it wasn’t a body to turn up one’s nose at.

She ran her hands over her breasts, testing their weight, then massaging her nipples between thumb and forefinger. As always, tiny frissons of pleasure raced down her spine and into her pussy. Moving her hands lower, she pressed them against her flat stomach—the result of constant hard work—and on to her naked, freshly waxed pussy. Moving her feet farther apart, she pressed hard on her clit and wetness gathered inside her cunt.

Her eyes took on a glazed look as she separated her labia, scraping them with a light touch of her fingernails, and slid two slender fingers into her slit. Yes, she was right. Nice and juicy. With a familiar rhythm, she began to stroke up and down, her breathing faster, the pulse deep in her vagina setting up its needy throbbing.

She was about ready to grab the Purple Pleaser from the gym bag when a sharp rap on the door scared her out of her reverie. She jerked, almost impaled herself on her fingers and nearly fell back on her ass.

Who the hell is that? In this snowstorm? When she turned her head, she saw a face peering in the large window and nearly fainted.

Her first thought was not that he might be a killer or a rapist, but that he’d seen her naked, playing with herself. She grabbed her robe from across the foot of her bed, shoved her arms into the sleeves and belted it tight around her waist. She took a deep breath to calm her racing heart and searched for some kind of weapon.

How crazy am I to be up here alone with no protection? No—how crazy is it for someone else to show up in the isolated spot?

Just then he rapped on the window again and shouted at her.

“I’m harmless, I swear it. Please open the door.”

Jessie grabbed the poker from the fireplace, held it tight in her fist and opened the heavy wooden door.

Share what you thought about Cupid's Shaft and earn reward points.