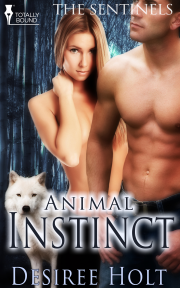 Book 4 in the The Sentinels series

Drew Noland knew that Ann Marie Knight was his mate, but first he had to gather The Sentinels to take down a vicious group of hunters.

When Ann Marie Knight literally fell into Drew Noland's solitary existence as an injured white wolf, little did he expect her to shift into a woman whose scent called to him - mate!

Already gathering to track a vicious group of men who maimed and hunted animals illegally, they turned their attention to rescuing her brother. But could Drew calm Ann Marie's fears and convince her they were meant to mate for life?

This book was a very intense, quick read that was both an arousing treat and a suspenseful mystery rolled into one.

This is a fast, entertaining read with some crazy, hot sex scenes!...Overall, this is a good read if you have a couple of hours some night and are looking to get all hot and bothered!

Share what you thought about Animal Instinct and earn reward points.