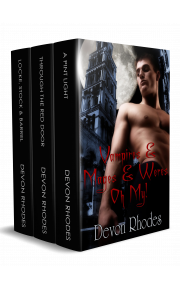 What's a vampire to do when every day is the same old dull quest for blood? Head to Maui, of course. But before Valerian can hit the beach, he needs to get rid of the sultry mage seducing him in his sleep. She may have fooled his subconscious, but he doesn't need a mate complicating his life. Imagine Val's shock when he finds out she's a he, yet still has the power to arouse him beyond anything he'd ever imagined.

Raine faints at the sight of blood and isn't looking forward to being a vamp's chew toy. Still, family duty calls, and Valerian turns out to be the hottest, and most powerful, male on two legs. Raine is crushed when the sexy vamp of his dreams runs from their rough play in horror. But his pride can't stand in the way when Valerian accidently steals his magic along with his blood.

Now, with time running out, Raine needs to seduce him one last time to even up the score, and maybe this time, they'll exchange more than blood and power. Magic is in the air, and sometimes love only needs a little nudge.

Through the Red Door

Just a demon's luck. Seth finally finds the perfect house…and it comes with an angel.

The last thing that demon Seth expects to come across while househunting is an injured angel…especially one who has no idea he's anything but human. Every instinct in him wants to stay far away, but Kyrian is being targeted by another demon, and Seth reluctantly finds himself playing guardian to the irresistible male.

Kyrian has no idea what is 'haunting' his house, but after he breaks his ankle being shoved off the deck, he's had enough. Strong, handsome Seth is a godsend, making him feel safe and secure. But he alludes to secrets that will test everything Kyrian believes…and turns the tables on just who needs protecting.

Faint heart never won fair…mage? What's a werewolf to do when his mate runs away? Chase him, of course

Aspen, a master mage, has loved his foster sister Brie for years, but now that she's been forced to become an acolyte, the only way to ever win her is to find another source of the power their faction needs before the new moon. Seeking information about the were, Aspen walks into Locke's café and finds what could be the solution to everything. He could finally have Brie…but sometimes what you think you want and what you get are two very different things.

Locke is shocked when Aspen walks into his life. He'd always been told that as an omega, he would never have a mate. But the joyous occasion is marred by his banishment from the only life he's ever known, and even worse, Aspen has disappeared. Now, with nothing more to lose, he must track down his wayward mage. But trouble has beaten him there and unless he acts quickly, Aspen could be killed. And that's not even the worst possible outcome…

There must be an easier way. Valerian grimaced as he retracted his fangs, sealed the punctures with a flick of his tongue, and let his inebriated, middle-aged snack slide down the wall to rest in a heap at his feet. After a moment of wrestling with his irritatingly overactive conscience, he bent to prop the fellow up comfortably against the brick wall of the alleyway. Well, as comfortably as one could be, considering the lucky donor was not only drunk, but also a pint light. With one last glance around to confirm he was still unobserved, Val re-entered his club through the heavy metal door he had left propped open with a dairy crate. Low tech solution to the automatic lock mechanism, but anyone who knew Val also knew he wasn’t one to waste magic on trivialities. Not that he had power to waste anymore. Middle-aged for his kind, it was getting harder by the decade to take enough blood to keep his power level up. Middle-aged? Ugh. Val shook off the disturbing thought.

That need currently sated, he was free to concentrate on the current crisis. Or crises, he corrected himself resignedly. Damn problems never came one at a time. No, they hammered at him like the waves on the North Shore of Maui. He stopped in his tracks at the tempting thought of Hawaii, and whipped out his cell phone, sending a brief text to his travel agent. With a bit more spring in his step, Val resumed his path through the back of the club, winding smoothly without pause past customers and employees alike as he headed straight into the office.

“Get that lightweight tossed out, Val?” Killian, his oldest friend and business partner, quipped from the couch.

Val rolled his eyes at the lame joke, but restrained the comeback K was obviously looking for, instead using a tiny push of magic to shove Killian’s feet off the coffee table as he slammed the door behind him.

“Geez, relax Valerie. What’s got your knickers in a twist?” Killian took a moment to stretch his endless, jeans-clad legs out in a quiver in front of him before dropping his heels right back on the table with a thump.

“Don’t call me Valerie,” Val automatically replied, before his gaze narrowed on Killian. His copper-haired friend looked entirely too innocent, and Val knew there was nothing more dangerous than K with that sweet look on his face. He gave a mental nudge, found nothing, and gave up with a grunt.

The ennui was starting to really get to him, but he also didn’t need the upheaval that was about to land on his doorstep. “K, don’t you ever tire of making the same tired jokes over and over again?” He began pacing back and forth in the confined space. “And sitting here night after night scuffing up my table with your damn boots before finding some overly endowed bimbo to take home and swap bodily fluids with?”

Killian stared at him with a sincere frown creasing his pale forehead. “Are you okay, Val? You seem a little, uh, tense.”

Share what you thought about Vampires & Mages & Weres, Oh My! Box Set and earn reward points.