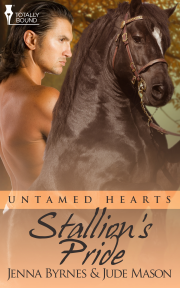 A recently discovered horse talisman and a gypsy horse changeling tribe seem like the perfect match. Is headstrong Brishen ready for the power the talisman brings?

It's a stressful time for the familya of gypsy horse changelings. Shandor, King of the Gypsies, has died, leaving the clans at war and his son, Brishen, struggling with his new-found leadership. Brishen also struggles with something more personal - choosing a life mate. Will it be Tawnie, the female his father selected for him? Or handsome Jal, whose masculine features excite Brishen more than anything has before?

In cougar territory, a day's journey away, clan leader Kai and his mate Aric are dealing with an issue of their own. A new talisman discovered - a brilliant purple stone with the head of a horse in gold filigree. Unaware of any horse changelings, Kai calls a meeting of the talisman holders to discuss what should be done.

Tarek, leader of the bears, and Cole, ruler of the wolves, come together with Kai to track down their new changeling brothers. When they find the horses and meet young, headstrong Brishen, it's a battle of wills - a battle no one wants to lose.

Brishen’s thoughts raced. The cool evening air had his flesh crawling with goose bumps, his nipples erect. Tawnie, her supple body tanned and eager, pressed against him. Yet, the moonlight and her presence couldn’t distract him from where his mind continued to wander. His father, Shandor, lay abed, ill for some months with age and a hacking cough that wouldn’t let him rest. Pesha, his mother, tended the old man, easing his discomfort, but there was little else she could do. Shandor’s life had been long and filled with troubles, as had the lives of all of their vitsa, or clan. Years of mistrust and battle with other vitsas had taken its toll on them all. Mares lost foals too often, and many of the young stallions fought amongst themselves, even within familya groups.

“Brishen, don’t be so stubborn,” Tawnie murmured, her arms reaching around his neck, her body pressing ever closer to his. Her lips, ripe and succulent looking, pursed for a kiss as she rose onto her toes and leaned in.

Brishen straightened, peering over the top of the lovely woman’s head. The tree lined valley with the meandering river running through its centre was ideal for the families. The field of rich grasses and clover fed their equine form. There were pockets of shrubbery where berry and wild apple trees grew in abundance. Some homesteader must have abandoned the area years ago, he thought, trying to push the vision of his wasted father from his mind.

“Hey.” Tawnie grabbed his ears and dragged his face down so she could see into his eyes. “I’m still here, remember me?” Her voice was soft, but her deep brown eyes shone with a brightness that surprised him.

“Yes, I know you are, and I could never forget you.” He smiled, a little weakly he knew, but he hoped it reassured her. After all, she was the woman chosen for him by his father. He reached around her, resting his hands on her wide, muscular hips. A granite boulder behind him was at just the right height for him to perch his arse on. He drew her with him as he shifted, the thread-bare jeans not doing anything to cushion his bottom.

The woman smiled, her wide eyes appearing even brighter in the moonlight. “Yeah, I know, you’ve got a lot on your mind right now. I just thought I might be able to distract you for a while.” She swivelled her hips, grinding herself against his slowly rising cock.

“The wars between our vitsas are killing us,” he mused. “We need to find a way to live in peace with the others before there are too few of us to keep the natsia of horse changelings alive.” He gazed into her eyes then leant forward, pressing his lips to hers in a desperate effort to forget his woes, if only for a short time. Even as his lips parted and his tongue delved into the sweetness of her mouth, he found his thoughts going to another.

Jal, his friend for as many years as he could remember, troubled his mind. Tall, even taller than himself, Jal was black skinned and insanely handsome.

He tore his lips from Tawnie’s and turned his face to the side. Confused and feeling more alone than ever before, he wanted to cry out his frustration but dared not. How could he let anyone know how he felt about his friend?

“I understand the burdens you bear. But what troubles you so, right now, my love?” Tawnie stroked his shoulder and arm.

Her touch was like silk, the tips of her fingers sending a shiver down his spine. Closing his eyes, he wondered what to say. What will placate her without causing her any more discomfort? Best to stick with the concerns I have for my father.

When he opened his eyes again, the night had darkened, yet still her eyes sparkled when he found them with his gaze. “My father troubles me, his illness, his weakness. I wonder how much longer he has to live. What will become of our familiya when he passes? Or, for that matter, the whole gypsy natsia?”

Brishen pushed himself up off the boulder and away from her embrace. He walked towards the river, his boots sinking into the loam. Others shared Tawnie’s delusions, but he knew the truth. His father wasn’t strong anymore. Shandor hadn’t been able to keep the various vitsas from fighting for a long time. He’d become the king in name only, and the gypsy nation suffered because of it.

He heard her stumbling after him, her footfalls light but discernable.

“Brishen, where are you going?” She sounded annoyed.

He couldn’t blame her. He’d been dodging her for weeks, ever since his father had decided she was an acceptable mate for him.

He spun and faced her. She was only a few steps from him and stopped when her breasts came near to touching his naked chest. He glanced down at the lovely mounds stretching the soft cotton of her blouse and smiled. “Maybe I just wanted to see you approach me.”

Jenna thinks everyone deserves a happy ending, and loves to provide as many of those as possible to her gay, lesbian and hetero characters. Her favourite quote, from a pro-gay billboard, is "Be careful who you hate. It may be someone you love."

Stallions Pride immerses you in the world of Brishen, the new king of the Horse Changelings, people who can transform into horses at will. From the death of his father at the beginning, to the awakening...

Share what you thought about Stallion's Pride and earn reward points.