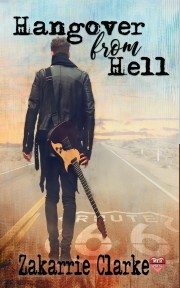 Love, lust & leather...until the twelfth of never. A Hangover From Hell is exactly what greets rock star Callum Carter on the final morning of an 'On the Road' trip along Route 66, taken with his partner, artist Daniel Flynn. Theirs is a story of fame, lust, laughter and all-consuming love. They met five years ago, when the infamous 'enfant terrible' was commissioned to paint Callum's portrait and have been together ever since. The latter remains a closely kept secret...until the morning they wake up in Las Vegas. Married. Dan has no memory of this miracle taking place, only one thing seems certain; he has somehow managed to pull off his masterpiece of mischief, and inveigled Cal down the aisle.

Share what you thought about Hangover from Hell and earn reward points.