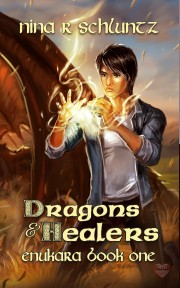 A simple act of kindness from a human toward a dragon triggered the Enukara--giving the human the ability to heal the wounds of others. The dragon bonded to him was granted immortality. The price for this gift was simple. The dragon's life was bound to the human. The greed of dragons and humans was underestimated. For if an Enukara's life was taken by another, they would inherit the immortality blessed to the dragon. Both human and dragon could steal this gift. The slaughter of all Enukaras quickly ensued, until one dragon killed his own Enukara. The power he inherited was unfathomable. He hunted and killed every immortal who had slain an Enukara. A new Enukara emerges who challenges the mindset of the immortal dragon and the Enukara hopes to alter the fate of humanity, by showing the dragon how to love once again.

Share what you thought about Dragons and Healers and earn reward points.