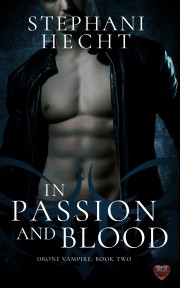 Now that Dante has found his mate, Brenden, all he wants to do is live in peace and be left alone. Unfortunately, peace is pretty hard to find when you are living with a clan of Drone Rebel Vampires. After years of being treated as second-class citizens by the Pure Born run government, the discrimination against the Drones has reached frightening new levels. Entire clans are disappearing as rumors of mass murders swirl around the paranormal community. Dante knows itâ€™s only a matter of time before his adopted Drone Clan is next. The situation becomes even more desperate when the Pure Borns learn that Brenden has created a weapon that could turn the tide for the rebels and help end the persecution forever. Will Dante be able to protect his mate or will he be forced to sacrifice Brenden to help save the rest of the Drone Clan?

Share what you thought about In Passion and Blood and earn reward points.