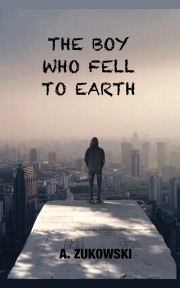 The Boy Who Fell to Earth

Jay Palmer is two months away from his sixteenth birthday. He doesnâ€™t realise how his life will be changed forever when a gang of thugs leaves a badly injured boy on his doorstep. The biracial boy and his white single mum Maggie nurse the stranger, sixteen-year-old Aleksander Zukowski, also known as Sasha. Sasha ran away from care two and half years ago. He sleeps rough, is addicted to drugs and sells himself on the streets of London to fund his habit. For the first time in his life, he has a reason to change. Sasha confirms what Jay already knows about himself but it won't be easy for Jay to come out to his macho mates in a largely black neighbourhood. Sasha has an uphill struggle to stay clean when his past threatens to throw him back into the abyss. Are the two boys strong enough to stay together against all odds? This title contains material some may find objectionable or trigger-inducing: drug use, child abuse, rape. "It has a force that keeps you on the edge of the seat and a grittiness that opens your eyes and makes you think." ~ Sinfully gay romance book review It is powerful, painful, and very emotional. ~ Diverse Reader

Share what you thought about The Boy Who Fell to Earth and earn reward points.