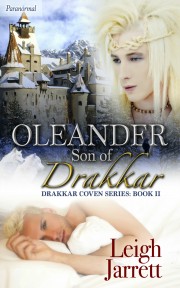 &lt;p&gt;The unrelenting seduction of Oleander's cool, flawless skinÃƒÂ¢Ã¢â€šÂ¬Ã¢â‚¬and deep, captivating eyes. The concern in his voiceÃƒÂ¢Ã¢â€šÂ¬Ã¢â‚¬the touch of his hand. The exhilaration and pride elicited by the sight of Oleander waiting for him after the visit with his family had left him feeling disappointed and unfulfilled.&lt;/p&gt; &lt;p&gt;Unfulfilled ÃƒÂ¢Ã¢â€šÂ¬Ã‚Â¦pointless, insignificantÃƒÂ¢Ã¢â€šÂ¬Ã¢â‚¬until Oleander.&lt;/p&gt; &lt;p&gt;Amidst the chaos of his sexual reckoning, Timothy is compelled to uphold an intimate pact struck between himself and Oleander, and chooses to follow him north to Drakkar CastleÃƒÂ¢Ã¢â€šÂ¬Ã¢â‚¬the threat of war upon them. Grimmr Coven is advancing deep into Drakkar Coven territory, and only Oleander may know the reason why. He had lived amongst the Coven Grimmr for many decades with his human lover, Torkel, and fears that a far greater threat is coming, forcing Grimmr Coven south into Drakkar Coven territory.&lt;/p&gt; &lt;p&gt;Left behind while Oleander goes in search of answers, Timothy's inner turmoil becomes unbearable. His only company enroute to Drakkar Castle, Alexis, a vivacious, blue-eyed seductress with a secret, intent on stealing him away for reasons that would launch the already fractured family of Drakkar at each other's throats.&lt;/p&gt; &lt;p&gt;What readers are saying:&lt;/p&gt; &lt;p&gt;&quot;Wow!! The vampires in this book are not ones to be messed with at all! Now go in to this book not expecting your typical romance because you will not get that at all in this book... This book was a no holds barred Vampire book that I would say had very little romance but a lot of other things where going on in this book from action too the world this author built in this book &quot;which I loved&quot; that had me on the edge of my seat not wanting to put this book down at all. I will be the first to admit I am a huge paranormal/ vampire fan and the way this author wrote this story and characters was amazing and I really loved it!&quot;&lt;/p&gt; &lt;p&gt;&quot;One of the characteristics I look for in a new series is the ability of author to make the sequels interesting and different enough from the first book to keep my attention. Wilder succeeded in this with the book Oleander. Not only is the main character Oleander unlike his brother Callum, his relationship with Timothy is unlike CallumÃƒÂ¢Ã¢â€šÂ¬Ã¢â€žÂ¢s with Laramie. While the book Callum is complete in itself, even if the characters from it continue on in the book Oleander, the new book leaves several plot points that should be resolved in future stories. I was concerned that the next installment would feature the third brother Drachen, a totally unpleasant character, but it would seem it will address some of what is introduced in this book. Wilder continues to portray the vampires as violent, but they fit the world created in the series.&quot;&lt;/p&gt;

Share what you thought about Oleander, Son of Drakkar and earn reward points.