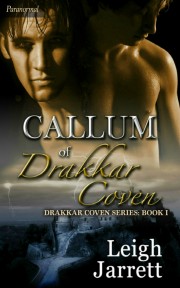 Come nightfall, the inhabitants of the ancient castle perched high on the mountain above their picturesque valley would awaken, and then no one left outside the village walls would be safe.

The torches set into the thick stone walls of the castle would be lit, the evening bells would toll, then Lord Callum would release his riders, led by his brother Oleander, an alabaster, screeching creature of nightmares; thundering through the night as he collected his victims.

After one of Oleander's raids unexpectedly breaches the walls of the village, Laramie finds himself face to face with Lord Callum, a dark, majestic beast like none he has ever seen before.

His first glimpse of Lord Callum sets his heart racing, partially out of fear, but mostly out of fascination, and something else, and Callum takes note of that, pleased to have found his next plaything.

Share what you thought about Callum of Drakkar Coven and earn reward points.