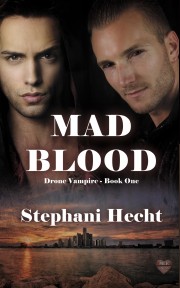 Ever since being released from the paranormal prison that served as his home for ten years, all Dante wanted to do was pick up the pieces of his shattered life. Once one the most respected vampires, he now is a shell of what he used to be, both emotionally and socially. Taking shelter with a rebel band of Drone Vampires, he has given up any hope of true happiness. Then when he least expects it, he finds himself drawn to another vampire. Young and innocent to his dark desires, it's the last male Dante ever thought he would want. Not wanting to corrupt another, he tries to deny his true feelings. Then after a few stolen taboo touches, Dante can no longer fight the urge to claim his mate.

Share what you thought about Mad Blood and earn reward points.