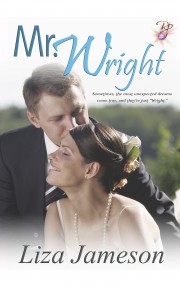 When Lucy Merkin was young, she didn't crush on the usual Tiger Beat poster boys. Instead she carried around a frayed copy of Time Magazine with comedian Benjamin Wright on the cover. Already in his forties when she was in high school, she knew that her crush was unusual, but his sense of humor and dashing good looks made him irresistible to her. As an adult, the infatuation continues. Her friend gets her tickets to see him and his comedy partner live and she's thrilled. During the show, the partner makes a joke asking if anyone in the audience would take pity on Mr. Wright and bestow a kiss upon him. Not wanting to miss her chance, she runs to the stage and gets to lock lips her celebrity crush. After a few stutter starts, the couple begins a long distance relationship, but that is far from their biggest hurdle. Between his children's attitudes, the press's opinions and Lucy's abandonment issues, the struggle to maintain their love is a difficult one. Will some friends, some booze, and some pretty great sex be enough to ensure their happily ever after?

Share what you thought about Mr. Wright and earn reward points.