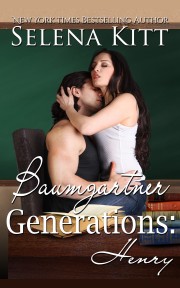 Henry Baumgartner is in trouble. He used to be a big fish in a little pond, but now he's in college, and the world sure seems a lot bigger! Instead of passing him because of his athletic ability like they did in high school, he discovers his professors actually mean it when they say he needs to do the work or he's going to fail his classes--and be kicked off the all-star hockey team. Turns out, Henry's been keeping a secret, and while he desperately continues to try to keep it, from the girl he's got a crush on, from his roommate who's after the same girl, from his parents and teachers and coaches, he knows he can't go on keeping it forever. So when his parents hire him a tutor, he turns to this angel of mercy for help, but little does he realize that Mrs. Toni Franklin is going to complicate his life in ways he never could have foreseen...

Share what you thought about Baumgartner Generations: Henry and earn reward points.