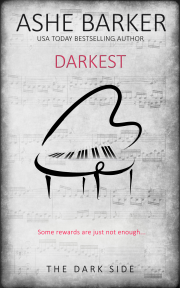 When his past destroys Eva’s trust in her Master, can he win her back?

As their turbulent, complex relationship deepens, Nathan Darke is increasingly aware that Eva Byrne has become much more to him than his submissive. She’s in his home, in his family. And in his heart.

Eva hasn’t found it easy to trust, to believe in herself and in a relationship that might last. But happiness, once so elusive, is within her grasp. Nathan is her Master, her lover and her soulmate.

However, no sooner do they manage to find a fragile balance between them—a way of entwining both their worlds—and start to build a future than their past comes crashing back to destroy their emerging love. Jealousy and hate brutally shatter Eva’s and Nathan’s delicate trust in each other, and their life together crumbles.

Can they overcome the crushing pain of betrayal and deceit to regain some sort of future together, or are some wounds just too deep to heal? Are some risks too great? Some rewards just not enough?

Publisher's Note: This book has previously been released by Totally Bound Publishing, it has been revised and re-edited for re-release. This book is best read in sequence as part of a serial.

“What the fuck…?” I’m running for the stairs, then take them three at a time—I can definitely shift a bit when the situation calls for it. I charge down the landing toward Rosie who is standing at the open door to Nathan’s room. Her fingers are pressed into her ashen cheeks, her continuous screaming just getting louder and louder. Reaching her, I grab the tiny figure by the shoulders, spinning her away from the door. I can feel the small body shaking under my hands as, with Rosie’s face pressed into my stomach, I stroke the dark hair in an instinctive attempt to calm her. I look over her head, dreading what sight awaits me. Blood-curdling murder? Horrific gory accident?

None of that. Mrs. Richardson is there all right, on the floor, her legs tangled in the rather fetching navy and black duvet that has slid off Nathan’s bed. She looks to be asleep. I hug Rosie tighter, tell her—somewhat more optimistically than is perhaps justified—that it’s okay, and to wait for me where she is. Her screams have subsided into gulping sobs so I step into the room, and approach the still figure on the floor.

Nervous, I kneel beside her and stretch out my hand. I half expect her to leap up with a shout of ‘Boo!’ I think it’s fair to say I would have made a disgusting mess on the inch-deep shag pile if she had. But she’s motionless, no response. My hands hovering, I’m not sure if, where to touch and desperately try to think what to do, how to find out if she’s alive.

“Is she breathing? Oh, Eva, is she dead? She can’t be dead. Please. Please don’t let her be dead…”

“Shhh, sweetheart, let me have a look.” Breathing, there’s a thought. Carefully watching her chest I see a faint quiver of movement there. Thank God! Encouraged, I at last take hold of her hand—it’s warm—and I feel for a pulse. It’s there. Faint, thready, but definitely there.

“Rosie, she’s alive but we need an ambulance. Run down to the kitchen for my phone. It’s in my bag, on the table. Hurry, please.”

As Rosie turns to scamper off, her wits now fully about her again, I lean down close, desperately scanning Mrs. Richardson’s still face for any sign of consciousness.

“Grace? Grace, can you hear me?” I want to pick her up, shake her shoulders, but I’m scared of hurting her. I settle for leaning into her face, calling her name. Rosie comes skidding back seconds later, my phone in her hand. She thrusts it at me and I stand, pressing nine-nine-nine. The efficient disembodied voice responds, politely asking me which service I require.

“Hello, yes, ambulance please. Our housekeeper has had an accident.”

The next voice I hear is the ambulance service, asking me what the problem is.

“Our housekeeper’s had an accident. She’s unconscious.”

The calm female voice asks me if I know what happened.

“How long has she been unconscious?”

Christ, why can’t they just send a bloody ambulance? “I don’t know. We just arrived home and found her like this. No, she’s not talking. Yes, she’s breathing.”

At last the ambulance lady seems to get the message and starts asking for the location. I realize I don’t even know the postcode. I look helplessly at Rosie, who rattles it off. Bless her, and bless Nathan and Grace for drilling it into her. Gathering my own wits now, I realize we’re due a good wait as the nearest ambulance must be half an hour away. That’s assuming they can even find this place. I give directions as best I can while Rosie disappears back out onto the landing.

At last the ambulance control room assures me that help is on the way and I hang up. I stand in the middle of the room, looking helplessly down at Mrs. Richardson who has shown no sign of stirring. For the first time I look around, trying to imagine what on earth could have happened. At a loss, I kneel beside her again, taking her hand, stroking it. “It’s okay, Grace, an ambulance will be here soon. You’ll be okay. Please, please be okay.”

I hear Rosie come back in, stand behind me. Her little hand is on my shoulder. “Uncle Tom’s coming. He’ll be here in five minutes.”

“I phoned Uncle Tom from the downstairs phone. He’s in the top meadow but he’s on his quad and he’ll be here in five minutes.” At my incredulous look she goes on to explain. “It’s a long way round by road, but only a few minutes across the fields. He’ll be here soon.”

I hug her for the clever, resourceful little wonder that she is. I never thought to call Tom, but of course he’s our nearest neighbor. He knows the area. He can direct the ambulance crew. I start to feel a sense of relief—this bloody catastrophe might just turn out all right after all.

A faint rustle and moan behind me has me swirling around and once more leaning over Mrs. Richardson, looking for some sign that she might be coming round. Her eyelids flutter, a brief flash of slate gray as she opens them a crack then lies still, silent again. Rosie is kneeling on her other side, we each have one of her hands in ours and Rosie is talking softly to her, tears once more rolling down her cheeks although the earlier panic has now gone. “Nana, please wake up, Nana.”

I feel the hand pressed between my palms flex slightly. I squeeze back to show I’ve felt the touch. “Can you hear us, Grace. It’s Rosie and Eva. Can you hear us? Please, open your eyes…” I glance across at Rosie, her little face trembling, and I reach over to stroke her wet cheek.

“She’ll be okay, love. We’ll look after her.” I hope I’m not making promises I can’t keep.

“Who’ll look after us? Who’ll look after me? I’m scared…” The whisper is faint, fearful, conveying the agony of doubt faced by a child whose world is about to shatter. And not for the first time.

“Your daddy will. And until he gets home we’ll look after each other. And Mrs. Richardson. I promise.”

Rosie looks at me, our gazes lock over the inert, unconscious body of the woman she clearly thinks of as her grandma, and the promise is sealed, shared.

The clatter of a door crashing downstairs and the pounding of footsteps coming up and along the landing heralds Tom’s arrival, in less than the promised five minutes, it seems to me.

“What’s happened?” He’s crouching beside us, reaching out, feeling Mrs. Richardson’s neck for a pulse.

“No idea. We came back from shopping a few minutes ago, found her here, like this. The ambulance is on its way.”

“Good. They’ll never find this place, though, without some help. We need to send someone down to the bottom of the lane, direct them up here. And someone needs to stay here with Grace. Do you have any first aid experience, Eva?”

I shake my head.

“I do. We farmers are accident prone. Right, I’ll stay then. And we’ll need to make sure the gate is opened for the ambulance to get in. There’s a remote control in the kitchen—do you know where it is, Rosie? Do you know how to override the sensor?”

Thank you, Ms. Barker, for writing such an enjoyable, exciting trilogy with memorable, stubborn, flawed, human characters who constantly surprised me. Loved the books, the characters, and the plot....

What an emotional roller coaster!!!! I LOVED this book! Absolutely my favorite of the series. I laughed and I cried. I thought this installment lost a little sizzle, but it definitely made up for i...

Share what you thought about Darkest and earn reward points.