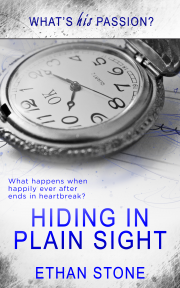 What happens when happily ever after ends in heartbreak?

After surviving a harrowing ordeal in Las Vegas, Javi Campos and Adam Brand seemed destined for a lifetime of love. However, life and insecurities got in the way, and Javi left, nearly destroying Adam in the process.

They’ve spent ten years apart, but circumstances bring them together again. Now a personal escort, Javi is terrified when his companion for the evening is killed in the bed they shared. As the obvious suspect, he turns to the only man in Portland he knows he can trust…his former lover, Adam.

Adam is shocked to hear from Javi, but he believes in him and agrees to help. The investigation takes them into the backstabbing world of Big Pharma as well as the religious homophobic culture of Russian Old Believers. While attempting to find the real killer, Adam and Javi have no choice but to deal with their lingering feelings for each other.

The situation might be the catalyst they need to finally find their long-awaited happily ever after. But first they have to solve the case before either one of them becomes the next victim.

I’m late, I’m late. For a very important date. Those words always ran through my head when I was tardy for appointments. Which was fairly often. One thing I hadn’t inherited from my father was his punctuality.

My dad, Timothy Adam Brand, Senior, was never behind schedule. I always seemed to think I could get in another five minutes of work before I left, then five minutes turned into ten and fifteen. Before you knew it, I was running like a madman attempting not to be too late.

Thankfully, the man I was meeting knew my habits and never expected me to be on time. Finding a parking spot was difficult and I wished I’d used the company limo so I could just be dropped off in front of the Red Star Tavern. I found a place on a side street two blocks away. I didn’t mind the stroll, it just delayed me further. I hoped Cory didn’t get too annoyed with me and take off. I strode down the street at a fast clip, being slowed down when a group of tourists pushed open the doors of the Hotel Monaco, not paying any attention to the pedestrians on the sidewalk.

I waited patiently for them to move, then realized they were expecting a bus. Annoyed, I shoved through the crowd throwing “Excuse me” here and there. As I passed the front doors I glanced inside the hotel, then had to do a double take.

Was that him? It looked like him. Someone I hadn’t seen in almost ten years. It was more than him being Hispanic with dark hair, there was something about the way he walked—a mix of confidence and cockiness. I entered the lobby, following the man I thought I recognized. He was larger, more built than I remembered him, but that was a natural change. I’d filled out a great deal in the decade myself.

“Can I help you, sir?” a staff member asked.

“I was looking for someone.”

“Is this person a guest?”

I peeked past him and my ghost was gone. That’s all it had been—someone who resembled him, or maybe just a figment of my imagination. If I’d caught up with the guy I’m sure I would’ve realized there was no resemblance at all.

Some people would’ve taken the staff member’s question as an accusation. That my race was the reason he had stopped me. But that wasn’t the case. Growing up as a black man in Oregon, I hadn’t faced much racism. In fact, the worst had been with a pair of cops on a visit to Las Vegas. But that had been a long time ago.

“Never mind,” I finally answered. “I thought I recognized someone, but there’s no way he would be here.”

“No problem, just let me know if I can help.”

I waved goodbye, rushed out of the front doors and jogged to the Red Star Tavern. Thankfully, Cory was still there and he even smiled when he saw me.

He waved a hand dismissively. “I’m used to it, Adam.”

I sat and gulped down a glass of water.

“You okay, man?” Cory questioned. “You look like someone just danced on your grave.”

I rubbed my face as I considered what I was going to tell him. The subject matter was his least favorite thing to talk about. “It wasn’t anything major. Forget about it. How are you doing?”

“Don’t bullshit me, Adam Brand,” Cory snapped. “I know you. Tell me what happened.”

The waitress saved me when she showed up and asked for our orders.

“I’ll have a beer,” I replied. “Whatever you have on tap. And the Chinook salmon.”

She took our menus and disappeared.

“A beer? In the middle of the day? Now I know something’s wrong. Spill it, Brand.”

Sighing, I squeezed the back of my neck then leaned back in my chair. “I thought I saw someone I knew. Someone I haven’t seen in a long time.”

I peered at him through half-lidded eyes. There was only one person who could fluster me.

“If you’re creating hallucinations about him then I don’t think you are.”

“And he broke your goddamn heart,” Cory spoke through gritted teeth.

I nodded and we stayed silent when the waitress brought our drinks.

“I don’t understand this hold he has over you,” he said after a sip of tea.

I shrugged and played with the corner of the mauve fabric napkin. “He was there for me when I needed him, when I had my breakdown. Javi was with me for the weeks when I couldn’t get out of bed, and he pushed me to get better. Putting aside the fact that he saved my life in Vegas, he saved my life again by being there despite my mental condition.”

“I understand being grateful for what he did, Adam. Hell, I’m glad you’re alive. If we hadn’t met in college I wouldn’t have you as my best friend. You introduced me to Darius. Without you I might never have met my husband.”

I grinned. “You were such a shy kid when I met you.”

“Exactly. You helped me come out of my shell. You’re a wonderful person. That’s why I don’t understand why anyone would want to leave you. But he did, and the way he did it was so fucking cowardly.”

I couldn’t deny Cory’s words. The note had been pathetically cliché. No real explanation as to why he had left, just that I’d be better off without him. Maybe it was the lack of closure that was hard to deal with.

“Well, it wasn’t him anyway,” I said. “There’s no way he’d come back to Portland and risk running into me. He knows I do business with lots of places downtown, and staying at the Monaco would be stupid.”

“What would a guy like him be doing there, anyway?” Cory asked. “He’s just a street hustler.”

I bristled at the put-down, but I didn’t feel like talking about my ex anymore. Our meals arrived and I changed the subject. We discussed my work at Brand Enterprises and his job at Bowersox Law, one of Oregon’s most prestigious firms.

By the time the meal was over, I’d pretty much pushed Javi out of my mind. I returned to work, finished just after seven and drove home to a rather empty house. Dad was out of town in California brokering a deal for an empty strip mall. He had plans to renovate the eighties style structures and start new, modern businesses.

Brand Enterprises dealt mainly in commercial companies all over the country as well as in international locations. Dad had an eye for what would work well where, but he didn’t like actually running the new creations. He was more of a flipper, buying places that seemed hopeless, turning them around into money-making ventures then selling them and moving on.

The house was large—eight bedrooms, four bathrooms—but not flashy or ostentatious. It was beautiful, but being alone was made that much worse by the emptiness. We had a small staff—a husband and wife who lived on-site and served as butler and housekeeper and chef, and someone who served as pool cleaner and gardener.

But I was still alone.

Ethan Stone has recently returned to Oregon and is working on re-growing his web feet. He has been obsessed with two things in his life: books and all things gay. After spending years trying to ignore the voices in his head, he finally decided to sit down and listen to them.

What he discovered was a perfect union of his two obsessions. Ethan used to have a day job that paid the bills. He wore a uniform to work and he looked damn sexy in it. Now he gets to wear sweatpants and watch movies all day.

This story has it all. The characters are wonderfully written. I loved Adam from the start. I was a little slower to warm up to Javi, after all he hurt Adam. Reading how the two of them work through their...

This story has so many moving parts, but never was I lost or confused.  Stone did an amazing job at explaining what or who was doing what, while keeping the romance story going in the backgroun...

Share what you thought about Hiding in Plain Sight and earn reward points.

Let's start with you telling us a little bit about yourself, Ethan.
I’m forty-one years old and have been writing full-time for a couple of years now. I live in Oregon which is where I grew up. I spent almost a decade in Nevada doing a variety of jobs including newspaper reporter and correctional officer.