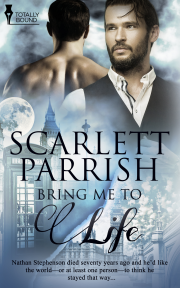 Bring Me to Life

Nathan Stephenson died seventy years ago and he’d like the world—or at least one person—to think he stayed that way.

In 1940s London, Sergeant Nathan Stephenson ignored his rank and the expectation that he’d wait for the war to be over and find a nice girl to settle down with, and took a lover. Not only was Cian Ambrose unashamed of his bisexuality, he was also proud to be a vampire. Back then, he was certain that his and Nathan’s relationship would last forever, refusing to take no for an answer.

One evening, Cian went too far in his attempts to persuade Nathan to become a vampire and left a mutual acquaintance, Jonathan Cutler, to deal with the aftermath. What Cian doesn’t know is that Nathan didn’t die—Jonathan brought him back to life, agreeing to keep Nathan’s continued existence a secret.

It’s now the twenty-first century and Jonathan’s back to call in the favor. Nathan’s an honorable man and can’t say no, but the trouble is, wherever Jonathan goes, Cian Ambrose can’t be far behind…

Reader Advisory: Bring Me to Life is set in the same universe as A Little Death by Scarlett Parrish.

I’m not even supposed to be here.

I don’t look too bad for a man who’s soon to hit three figures. Jet black hair without a drop of dye in it. Spine erect with no sign of the curvature that often comes with age, it still holds me to my full six feet in height. And not a line or wrinkle anywhere on my face.

But that’s probably got something to do with the fact I died seventy years ago.

“Ruby.” My voice is nothing more than a whisper across the restaurant table but despite the bustle around us, I know I’ll get through to her.

Ruby turns her head, staring at me with eyes unfocused for a second. Then she sees me more clearly and the daydream that had shrouded her melts away. She smiles, which lights up her fever-paled face and warms me from the inside out with relief.

She’s been ill for some time. No fault of mine. I didn’t drink from her while she battled the illness that kept her bedbound for the past fortnight, although I visited. Brought her fruit baskets, fortified wine, books. Pretty ribbons for her dark, wavy hair, which throws her complexion into stark relief. Anything to make her smile again.

“You’re not fully with me tonight.”

“No need to apologize.” I wave a dismissive hand in mid-air between us, glad I don’t have to bother with setting down cutlery or a wine glass before doing so. Sometimes I eat or drink but as I don’t need to, such occasions are rare. A number of my undead brethren drink coffee and beer, eat steak—rare, never well-done, of course—and vegetables, just to be sociable. Me? I’m not as gregarious, choosing instead to stick to a small group of friends. No, associates. Ruby’s the only one I count as a friend, and she isn’t even one of us.

“You’ve been ill,” I continue, and nod at her plate. Smoked salmon with a green salad, something light but nutritious enough to aid her convalescence. “I want to see you eat, but don’t force yourself if you can’t manage it.”

She pushes a rocket leaf around the plate with her fork, while resting her jaw on the other, cupped, hand. A small sigh escapes her, near-silent and likely undetectable to those less attuned to her moods than I. The microscopic adjustment in her shoulders seems to me like a full-on slump.

“Okay.” I clasp my hands, rest them on the tablecloth to prevent fidgeting. “Tell me.”

“Tell you what?” Her dark eyes flicker with avoidance—a glance is all she can suffer before looking back down at her uneaten dinner.

“My mother blames you for this,” she shoots back, surprising me with the speed of her reply. Judging by the way the blood—oh God, that blood—rushes to her cheeks, I’m not the only surprised one at the table.

“This?” I lift my eyebrows, already knowing the answer before it comes.

“She says…?” Perhaps it’s cruel to goad her into talking, but Ruby clearly has something on her mind and voicing her concerns can’t do too much harm.

“She says it’s my fault for getting mixed up with you.”

Oh. Ouch. I’m not human anymore but still feel the stab of pain at the insult being passed along by someone for whom I care deeply. Some people think vampires can’t be hurt.

How wrong they are.

“And what do you say?” My words come out a little sharper than I intended and I hope Ruby realizes it’s hurt speaking, not anger.

“I…” She gives up rearranging the components of her meal and sets her fork down. It tinkles against the side of her plate and I know my hypersensitive hearing is nothing supernatural. I’m on high alert. Concerned about her. “I told her she was wrong. I told her you were the one who’d diagnosed it.”

“Hardly.” I roll my shoulders in a gentle shrug, bashful rather than embarrassed by the compliment. “I’m not a doctor.”

“No, but still, you were able to tell there was something wrong.”

I drank from her one evening, only a few drops, before detecting something was wrong. A too-sweet aftertaste where there should have been a metallic tang. I advised Ruby to see a doctor and found someone else to drink from. She’s my one and only regular blood donor, but there are places I can go, people I can see in an emergency.

“It’s probably nothing more than measles or something similar.” It was a shock to me that measles could be a nothing disease, easily repelled by a vaccination in childhood. If a grown woman came into contact with the contagion, it manifested nothing more deadly than temporary nausea and the need for bed rest. When I was a lad, it had been nothing short of a death sentence.

“Of course I’m sure. If it was anything serious, it’d taste different.”

“Not even to save my feelings?”

“Ruby.” I rolled my eyes, displaying a lot more exasperation than I truly felt. Unsettled, my nerve endings tingled with something akin to fear, but which I refused to name such. Vampires don’t feel fear.

In the end it wasn’t measles. Chicken pox was beginning to show itself by the time Ruby got an appointment with her doctor, who was amazed that she knew something was up during the incubation period.

“Ah.” The doctor’s face—I’m told—paled at the news. “I see. Well, that makes all the difference. Your…sire…?”

“No.” Ruby set him straight on matters, despite the spinning sensation in her head as the disease took hold. “No. I’m one hundred percent human. He drinks sometimes. He tasted it on me.”

“Hmm.” A rough clearing of the medic’s throat and he went on with more down-to-earth matters, rooted in the medical realm rather than that of the undead.

In a strange sort of way, doctors and my kind are mortal—immortal?—enemies. The Hippocratic Oath states their duty is to “First, do no harm.” Not something vampires are famous for. After that, they’re morally bound “to preserve life.” Me, on the other hand? Yes, I’ve killed. Less frequently since I died. I discovered how it felt to take a life during the Second World War, then had my own life taken and everything changed. I became a killer of a different type—not trained by His Majesty’s Armed Forces. Forced into it by something—someone—darker still.

This book was beautifully written. I fell into it and never wanted to come out. Cian and Nathan are perfect for each other and watching Cian coax Nathan into what he will become was like watching a wel...

The writing was brilliant. The inner dilogue is comical, found myself laughing out loud many times. The sexual tension between Nathan and Cian is palpable through t...

Share what you thought about Bring Me to Life and earn reward points.

Three of my favorite books:

Gone With the Wind, . I've always loved "doorstopper" novels and first read this when I was around 15. This isn't a romance. It's not even a love story. It's a war story featuring the struggles of the woman from whom I stole my pen name.