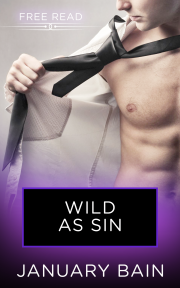 When two members of Satan’s Devils MC come looking to collect a gambling debt owed by her brother, they drive Skylar from her home. She barely had time to escape out a window. Now she has no choice but to work for the club if she’s going to keep her brother alive, but one wild night of sin spent in the company of a billionaire werewolf named Cesare and all bets are off. After all, turn around’s fair play.

Reader advisory: This book is linked to the Sin City Wolf series by January Bain.

January Bain has wished on every falling star, every blown-out birthday candle and every coin thrown in a fountain to be a storyteller. To share the tales of high adventure, mysteries, and full-blown thrillers she has dreamed of all her life. The story you now have in your hands is the compilation of a lot of things manifesting itself for this special series. Hundreds of hours spent researching the unusual and the mundane have come together to create a series that features strong women who don’t take life too seriously, wild adventures full of twists and unforeseen turns, and hot complicated men who aren’t afraid to take risks. She can only hope the stories of her beloved Brass Ringers will capture your imagination as much as they did hers when she wrote them.

If you are looking for January Bain, you can find her hard at work every morning without fail in her office with two furry babies trying to prove who does a better job of guarding the doorway. And, of course, she’s married to the most romantic man! Who once famously replied to her inquiry about buying fresh flowers for their home every week, “Give me one good reason why not?” Leaving her speechless and knocking her head against the proverbial wall for being so darn foolish. She loves flowers.

If you wish to connect in the virtual world, she is easily found on Facebook, Twitter and writes a weekly blog about her journey on Blogger. Oh, and she loves to talk books…

Share what you thought about Wild as Sin and earn reward points.