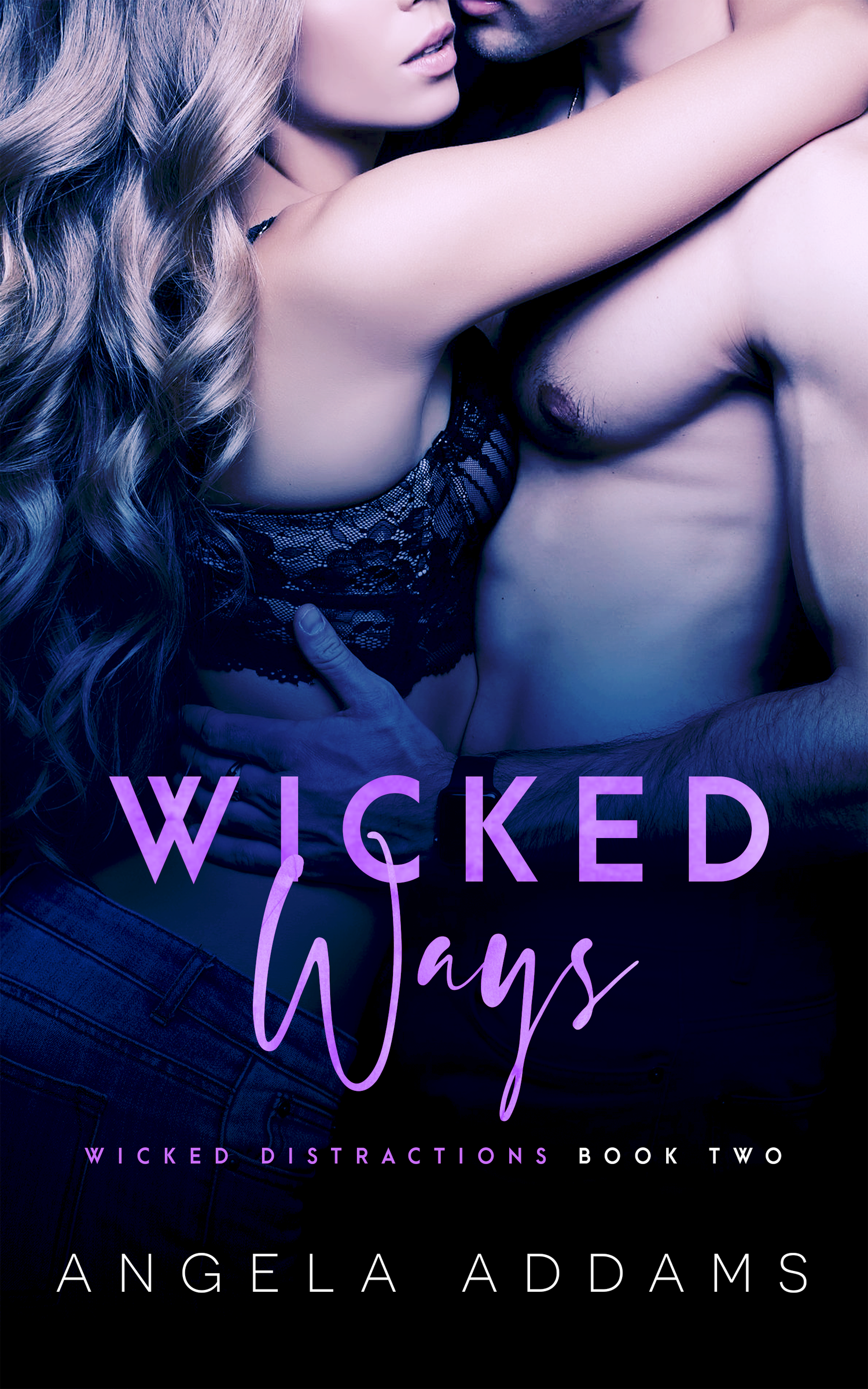 Book 2 in the Wicked Distractions series

A night with him was only meant to be a release, not an awakening.

Adam Lancaster, right-hand man and security expert for Cowan Enterprises, is called back home to help his family save their ranch from a gang of debt collectors.

While he’s there, he’s reunited with his childhood nemesis, Missy Alderton. Missy, once a tomboy, is all grown up and sexy as hell. She’s also the town’s sheriff, a kick-ass law enforcement officer who is determined to bring down the criminal elements that threaten more than just Adam’s family. Since they both have the same goal, it would seem they’d be able to work together, but Missy knows all about Adam’s years of working for the infamous Sabine Cowan, and she doesn’t approve of his methods of fixing problems.

Missy hasn’t seen Adam in five years, not since the night she seduced him as a little payback for things he’d done when they were younger. She got him all hot and bothered and walked away, vowing never to touch the man again. Now that he’s back in town, she keeps trying to convince herself that she’s not interested in spending too much close and personal time with Adam. That’s what her mouth is saying, but her body, on the other hand, can’t seem to get enough of him. Adam is trouble and he’s threatening everything she’s built in Grimshield, including the walls around her heart.

With so much at stake, Adam must convince Missy that sometimes you have to break a lot of rules to get what your heart desires.

The second Adam locked eyes with the mysterious woman dressed up as a dark angel, he knew he was about to get fucked…in all the right ways.

Sure, he was wearing a lame-ass pirate costume that was at least two sizes too small for his bulky frame, and yeah, he wasn’t supposed to be at the Halloween party to begin with, but this woman was staring at him like she wanted to eat him alive. Adam just knew that she’d come for him. He didn’t know how he knew. It could have been the way her eyes drilled right into him, smoldering and full of lust, and completely locked on his. Or maybe it was her skimpy little costume, all tight-looking black leather, holding on to her curves in a way that made his dick weep—and totally the kind of getup that would drive him wild. Then again, perhaps it was simply the pulse of his aching cock, acting as some kind of lightning rod for a horny female in his sights that had him so sure. This woman was a totally dangerous kind of hot, and she was all his.

The room was completely packed with people, but Adam’s dick was at full attention, straining against the flimsy fabric of his costume, so ready to sink into her. He’d thought the party was going to be lame. Man, was I wrong.

When he started to get up from his seat, she shot him a look that let him know he needed to stay put. She was coming to him.

The party was pumping. The music was loud, the bass thumping hard and drinks were flowing. Adam was feeling really fucking good watching this woman come toward him. The crowd moved around her as she approached. Her hips swayed and the wings jutting from her back moved with her, making it seem like she was actually flying toward him. Everything she was wearing was black, from her halo to her sexy-as-hell stilettos—everything except for her pouty lips, which were painted a deep cherry red. Adam licked his lips. He bet she’d taste like cherries too. She had a halter-top vest on that had a zipper down the front. One zip down and her tits would spill right out. Fuck, he wished she’d move faster. He wanted her on his dick, and he had no problem with fucking her right there in the corner of the room. No one would notice, and if they did, they definitely wouldn’t care.

She lifted her hands, running them along her hips and up her sides. Her tits weren’t huge, but she had enough cleavage to make his mouth drool, thinking about licking all that soft, flawless skin. She moved to the side to avoid another girl who was dancing, and it gave Adam a nice view of her rear. Her ass was just visible under that skirt of hers, like one tug up and she’d be exposed. He was praying she wasn’t wearing panties. Fuuuuck, please let her be bare.

She was sex. Pure sex. And even though she was wearing a mask over her eyes, Adam somehow just knew he’d never met her before. She wasn’t from Grimshield. No way. He knew all the girls around town. Even though he’d been gone for ten years, he knew he’d never met this one before he’d left Montana. Besides, this party was a high-school reunion of sorts, and he was sure he hadn’t gone to school with her. He would have remembered a girl like that.

He had to wonder, though, just where she’d come from.

The room was packed. There were so many bodies moving to the music and she was only a few feet away. He was sitting on a sofa chair, like a king, just watching over everyone, waiting for the gorgeous creature to make another move.

And when she got close enough, she stopped, but just for a second—long enough to give him a once-over that confirmed everything he already believed. She was going to ride his dick right there, right now. He was the luckiest guy alive.

She climbed onto his lap. No hesitation… She just hiked her skirt, flashed her lacy pink panties and climbed on up. Adam’s dick was weeping for real. Her pussy was so hot that he could feel it radiating against his pants. She was wet.

She didn’t speak. She just leaned in and kissed him, the fiercest kiss he’d had in a while. Her tongue was in his mouth, stroking him, and all he could think about was how good it felt…and how great her lips would be around his cock. All that cherry-red lipstick surrounding his dick? Yeah, super fucking hot.

She broke the kiss and looked down at him, her dark eyes full of lust and determination. She held up a condom that she’d pulled from fuck-knew-where and had her other hand playing with the zipper on her vest.

This was a sure thing. A quick fuck. His heart was hammering so hard, his dick was pulsing and he was desperate for the heat of her pussy. He grunted something meant to be affirmative, not trusting his voice to come out right.

She unzipped her vest. Her tits were glorious, a handful of flawless porcelain. Her nipples were ripe little berries. Adam was all hands and lips, sucking on her sweet buds, playing with her until she was rubbing herself against him. And when he slipped one hand between her legs, fuck, she was so damn wet, soaking her panties so much that he could have wept with joy.

It was so fucking hot—her little moans and purrs in his ear, the way she bit her bottom lip and how her hips moved when he yanked the panties aside and slipped his fingers into her tight, wet hole. It was a fucking fantasy come alive. This night could not get any more perfect.

She tugged at the flimsy drawstring of his costume and his dick came out like it was spring-loaded. It was hard and slick with pre-cum, and he was dying for her to suck him off. But her lips didn’t come close. Her hands were all over his cock, rubbing him so good that he could have spewed just from that. But she shifted herself back, ripped the condom package with her teeth then slipped it onto his aching cock so fast that he barely had time to think about it. He pulled his fingers out of her and sucked down the taste of her. Their eyes were locked. She was totally in it with him. She tasted like heaven and he wanted more.

Her eyes were drilling him as she lifted her hips and rammed herself hard onto his dick, right down his shaft until he was completely sheathed to the hilt. The sexiest fucking smile curled her lips and she slowly drew her body back, rubbing his cock until she was almost off him before sliding to the hilt again. Yes, she was totally going to fuck his brains out.

This…this was a night for the record books.

There they were, surrounded by other people, and this amazingly gorgeous creature was riding him like her life depended on it. Her sweet little pussy was so damn tight that it was like a leather glove squeezing his dick each time she rolled her hips. And her tits? They were right at his mouth, so he had to suck them in. His hands were on her ass, moving her harder, faster. Then she leaned in closer, so close that her lips were at his ear and she moaned a long, sexy sound. Her pussy was doing a spasmy thing of the most intense ripples and he realized that she was coming so fucking hard. So he let loose too, just let his climax go and filled the fucking condom.

He had his hands on her hips and he pulled her down to kiss those sweet lips again, but she pushed back, her hands on his chest to stop him.

He looked up at her, his mind fuzzy, feeling euphoric, wanting to know who this sexy woman was and where they could go for round two.

She just got a smile on her lips and pushed herself up and off him before adjusting her skirt. She did up her vest next, concealing her glorious tits from his view.

He moved forward, doing his best to stop her from leaving him, his dick still hard, wanting more.

“Come on, honey. Tell me who you are.” No way this girl was leaving without giving him her digits.

She laughed, leaned in close and said, “Why don’t you just call me Ugly Duckling, Adam?”

Adam froze. The smile slid from his lips. Clarity came like a slap to the face. There was only one girl he’d ever said something so vile to. “Missy?”

The curl to her lips turned into a sneer, all the answer he needed. Then she spun on those impossibly high heels and walked away.

He watched the crowd swallow her.

He’d just been fucked all right, by the one girl who hated his guts. The last time he’d seen Missy Alderton, she had not looked like a sex goddess. When he’d seen her, she’d been a scrawny teenager and a pain in his ass. Now at almost ten years later, Missy had definitely grown up, and she was sure as shit not an ugly duckling.

She is an avid tattoo collector, a total book hoarder, and loves anything covered in chocolate…except for bugs.

She lives in Ontario, Canada in an old, creaky house, with her husband, children and four moody cats.

Share what you thought about Wicked Ways PRINT and earn reward points.

Other books in the Wicked Distractions seriesView Series Page