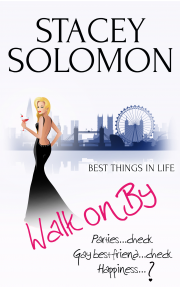 Book 1 in the Best Things in Life series

This novel is one of the best romantic comedies I've read. It isn't watered down or overly dramatic. The characters are realistic and written with emotional layers that are just waiting for the right...

Has the star been inspired by the success of Fifty Shades?

Check out the brand new microsite dedicated to Stacey's new series, Best Things in Life. You can find out all you need to know about the three book series and sign up to her author newsletter!

Other books in the Best Things in Life seriesView Series Page