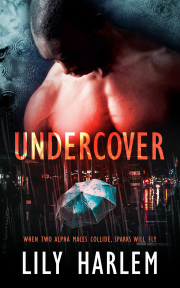 Samuel’s job is to scrutinize the store’s customers and make sure everyone stays on the right side of the law. One sexy guy in particular has him not only hot under the collar, but filling his dreams and starring in his wildest fantasies. Yet, he can’t pluck up the courage to spark a conversation and find out if those lingering looks mean what he thinks they do.

Until, that is, a misdemeanor occurs giving him the chance to haul hot bloke into his office. The only trouble is, Samuel soon realizes he’s bitten off more than he can chew. This man isn’t going to take a reprimand lying down, no matter how much attraction is fizzing between them.

There’s only one thing for it and that’s to allow the heat between them to reach combustion point—even if it means switching, pushing boundaries and bending the rules. Undercover or not, burning desire and scorching lust can’t be ignored.

Samuel was looking forward, as usual, to the latter part of his shift at Bilko, because it was then the sexy guy he had a secret crush on popped in for a few grocery supplies. Not that he’d ever spoken to him—he’d only admired from afar—but that still made it the highlight of his day.

He glanced at the clock for a third time, walked past a woman with a sleeping baby cocooned against her chest then passed by Sharon, who was humming a summer tune as she stacked beans on the shelf.

His mystery man had the cutest ass Samuel had ever seen and it was always encased in smart black pants. He usually teamed it with a plain white shirt that stretched over his shoulders and in hot weather, like today, the sleeves would be rolled up. It was the whole package that pushed Samuel’s buttons—the tilt of his chin, the grace of his movements, his statuesque height. And while thinking about packages, Samuel couldn’t help but wonder what it would be like to get up close and personal with the package between hot guy’s legs.

With his shoes clicking on the hard floor, Samuel wandered past the tills. An elderly man was struggling to pack his shopping into a pull-along trolley so he stopped and helped. “There you go, sir.” He smiled.

“Thank you, young man.” The customer gave Samuel a toothy grin then walked off, his back hunched and his feet dragging on the floor.

Samuel sighed and turned back into the shop. He hoped he wouldn’t end up alone. Being single was getting dull. It had been two years since he and Nathan had split and apart from a few drunken one-night stands there’d been nothing in his love life to mention.

Unless he counted obsessing over his customer.

Who probably wasn’t even gay.

The automatic doors slid open and the man on Samuel’s mind strolled in. He always had a focused expression, and sometimes a slight frown creased his brow. Not that he could see much of his brow—his hair was longish, a little curly, covered his forehead and licked over his collar.

Share what you thought about Undercover and earn reward points.