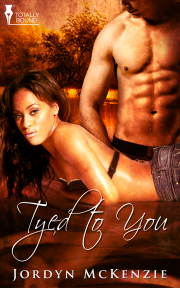 "And why not let the 'hot younger brother' woo you? You are the most amazing, drop-dead gorgeous woman I've ever known and you totally deserve to be wooed."

With her thirtieth birthday on the horizon, Jasmine Montgomery has just filed papers to divorce her unfaithful husband. She's spared a weekend of wallowing when she answers the call of her best friend, Laurel Benedetti, to come along for a carefree weekend at the Benedetti family lake house.

Joining them will be Laurel's younger brother, Tyson, and a couple of his closest friends, who are celebrating their graduation from college.

Aside from having known him since he was in primary school, Jasmine and Tyson have a very brief history: six years prior, a drunken moment's poor decision led to them being caught in a compromising position. Although Jasmine was horrified by her action, Tyson had fallen in love.

She hasn't seen him since that night, but the incident still lurked in the back of her mind. Surely he'd forgotten it had ever occurred…or had he?

All Tyson knows is that fate has awarded him this weekend as his chance to capture the heart of the woman of his dreams and convince her that age really is just a number.

Jasmine Montgomery listlessly navigated the tight, winding road, looking for the pirate ship mailbox that marked the driveway of Laurel’s family’s lake house. Jasmine had been all set to sit at home drowning her sorrows in a jar of Nutella and a marathon of trashy reality TV when she’d received her friend’s call. She’d begrudgingly accepted the last-minute invitation. Her marriage of four years had just ended after her soon-to-be ex-husband, Kyle, disclosed he’d been having an affair. The papers had been signed and filed on Tuesday.

Laurel had cajoled and begged, claiming she didn’t want to be the only girl in the 'sausage-fest' that was comprised of her younger brother Tyson and his friends, who would also be spending the weekend at the lake house. Once Laurel had sweetened the deal with the revelation that the wine cellar was fully stocked, Jasmine had finally agreed to come.

The pirate ship mailbox came into view and Jasmine turned onto the dusty driveway. As she drove the short distance to the two-storey cedar-shingled chalet, she saw only Laurel’s car parked in front of the garage and exhaled a breath she hadn’t realised she’d been holding.

She was really looking forward to seeing Laurel. They didn’t get to hang out as much these days, and mostly kept in touch via texting and social media. Her sudden case of nerves was likely due to the fact that Jasmine hadn’t seen Laurel’s brother, Tyson, since the party she and Laurel had had the summer that they had graduated college.

And that particular event had ended awkwardly, at best.

Laurel and Jasmine had been best friends since middle school. When they’d met, Ty had been a rambunctious six-year-old. By their high school senior year, he’d grown from annoying baby brother to antagonistic adolescent with a gaggle of skateboarding friends who spied on the two brunettes every chance they had got. Because both of her parents travelled frequently for work, Jasmine had been a regular at the Benedetti home, and Laurel’s family had enacted an open-door policy with her early on. She guessed they’d thought that the bookish Jasmine would be a good influence on Laurel, the popular cheerleader with a bad-girl side. However, considering they had fancied themselves every teenage boy’s fantasy of the naughty school-girl—in their uniform short skirts and wild wavy hair, sneaking out for cigarettes behind Mr Benedetti’s workshop or in the boat house—there’d been ample fodder to feed the wild imaginations of young Tyson and his friends. Jasmine had been a little suspicious at the time that eleven-year-old Tyson had had a bit of a crush on her but never really put any concern into the notion.

Fast-forward five years to the summer of Jasmine and Laurel’s college graduation.

Laurel’s parents had given them permission to use the lake house and have a few friends over, on the condition that they didn’t break anything, destroy any furniture, and they stayed out of the wine cellar. To Jasmine’s surprise, Tyson had come too, though she’d barely recognised him at first. The scrawny little skater punk had sprouted to a towering six feet tall and had put on at least thirty pounds of muscle. He’d traded the skateboard for a football and had been preparing to be the starting quarterback for the varsity team the upcoming fall semester. His soft cheeks had grown more angled with a strong jaw and the subtlest hint of a five o’clock shadow. She had been startled to notice his amazing green eyes watching her and she had realised she’d just been busted checking Tyson out. She’d flushed, smiled politely, and had greeted him properly with a sisterly hug, mentally reminding herself he was barely seventeen. Barely, as in he’d been about six weeks shy of his birthday. And he was Laurel’s baby brother, for fuck’s sake.

But he sure hadn’t looked like a baby anymore.

And after four Jägerbombs and a handful of jello shots, Jasmine had quite forgotten why Tyson was supposed to be off-limits. She didn’t know where Laurel had disappeared to. Much of the evening had become a blur at that point. All she’d known was that she’d suddenly found herself alone in the garage with him. They’d chatted at first. Ty had told her about football and getting ready for his senior year in high school, and she’d told him about how nervous she’d been to be done with college and entering ‘the real world’. There’d been what seemed to be harmless flirting, but it had escalated. It had been unclear as to who had made the first move, and at that point it hadn’t mattered when the garage door had suddenly opened. Laurel had found Jasmine and Ty both shirtless and tangled in a heated clinch across the top of Mr Benedetti’s classic Barracuda.

Though Laurel had cracked up in laughter, Jasmine had been mortified, which had made her head swim, subsequently causing her to vomit all over Ty’s feet.

The next day, Jasmine had woken up with the hangover to end all hangovers and Laurel had been kind enough to pretend it had never happened. She’d also managed to avoid Ty. And the day after that, she’d left the lake house to spend the summer with her family and begin the search for a job to kick-start a career in which she could put her business degree to good use.

She hadn’t seen or spoken to Tyson since that night but, every now and then, the memory would reappear unbidden in her mind. The embarrassment had since faded, but she’d found herself wondering at those times how he felt about the incident—if he even thought about it at all. Then she would wonder why she was still thinking about it, especially while she had been, at the time, happily married.

By day, she works a 9-ish-to-5-ish desk job. When night falls, and the house is quiet and calm, she puts pencil to paper, fingers to keyboard, and hoists her Freak Flag as high as it will go.

Having dabbled in writing since her t'weens, a recently realised knack for telling a titillating tale spurred Jordyn's decision to share her talent with the world. Strong, sassy women, roughneck men, and snarky dialogue are Jordyn's specialty. Her number one goal ? to entertain YOU, dear reader.

Jordyn enjoys good wine, better whisky, and the occasional belly laugh with her best friends; not necessarily in that order, but even better when they're all combined.

Share what you thought about Tyed to You and earn reward points.