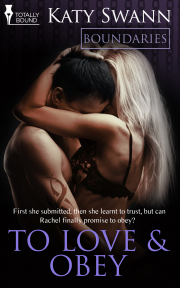 To Love and Obey

First she submitted, then she learnt to trust, but can Rachel finally promise to obey?

Despite her resolution never to love or trust anyone again, Rachel Porter has fallen for her sexy boss, Adam Stone — big time. His powerful and strict dominance is bringing out every submissive instinct she has, at least in the bedroom. Her body aches to please him and begs for punishment, and he doesn’t disappoint.

But, Adam makes it clear that he expects more from Rachel than she’s prepared to give. As the subject of a Total Power Exchange becomes more insistent, Rachel braces herself for a showdown with the man who has the power to reduce her to a pile of rubble in seconds. Should she stand her ground and fight against the TPE, or should she give up her freedom in order to keep him?

It turns out though that not everything is quite as it seems and, as their relationship takes a new turn, she finds herself thinking more and more about the collar Adam wants to place around her neck. Maybe wearing his collar wouldn’t be so bad after all. Would it?

Publisher's Note: This book is best read in sequence as part of this serial.

Rachel Porter stared out at the London skyline and sighed. She was sitting in Adam Stone’s chair in his plush office, daydreaming about the day before. It had been Sunday and she’d spent the whole weekend with Adam. And what a weekend it had been.

She shuddered as she recalled Dominique’s attack on Saturday night and her hateful words as she’d bitterly told Rachel that she was, in fact, Adam’s wife. Well, ex-wife, but that little fact wasn’t going to stop Dominique from getting Adam back as far as she was concerned.

Rachel moved slightly and flinched as the remaining pain from Dominique’s vicious whips stung her back. Thank God Adam had got to her before Dominique had carried out her threat and torn her skin off. Rachel had passed out in his arms when he’d found her, and she had woken up in his bed several hours later.

She ran her hand over the smooth, polished mahogany of Adam’s desk and smiled. He was in Birmingham today for a conference, and as she was up to date with all her work, she’d decided to enjoy the view from his office. This was where she’d first come face to face with him. God, he’d intimated her then.

She could, of course, catch up with the pile of filing hidden under her desk, but somehow she didn’t find that idea very appealing. What Adam didn’t know, wouldn’t hurt him and if he should find the pile, what could he do? Punish her? Yes, please.

She thought back to the day before—it had been one of those days that had left her stunned. Adam had drawn the most beautiful picture of her kneeling, naked and aroused, on the floor of his studio. He had then fucked her hard before showing her the picture he’d just drawn and that was when the persistent niggle of doubt had returned.

He had drawn a collar around her neck—the sort only twenty-four-seven slaves wore, and had then told her that he would collar her permanently, one way or another. And what had she done? Instead of telling him there and then that she didn’t want to be his slave, she had changed the subject and muttered something about needing to get home.

Why couldn’t she just have told him how she felt? She knew why, though. If he knew she wouldn’t agree, he’d probably leave her and find someone that could meet his needs. The thought of losing him was inconceivable.

Suddenly, the phone in her office rang, snapping Rachel back to the view in front of her. She jumped up then quickly ran to her desk, grabbing the phone just before it diverted to the main reception.

“Rachel Porter. Can I help you?” She hoped it was Adam.

“Rach? It’s Vicky from downstairs.” Vicky was one of her old colleagues when she’d worked for Joe. The day Adam had demanded that she come and work for him, Joe had been furious and Vicky and the gang had been deeply sympathetic. No one had envied her new job—Adam Stone had a reputation for being as demanding as he was ruthless. Most people, herself included, hadn’t expected her to last more than a couple of days before getting fired.

“Hi, Vicky. How are you?” She liked Vicky, but she hardly saw any of the old gang anymore. Once you worked on the executive floor, it seemed you became one of the ‘unreachables’ and it had taken a while for her to get used to being treated differently by her old peers. She’d felt lonely, cut-off and had hated her new job, including Adam, in the beginning.

“We heard that the boss is out of town so the girls and I wondered if you fancied coming to lunch with us?” piped Vicky in her high-pitched, friendly voice.

Rachel swallowed a lump in her throat. She really missed the lunches with the girls.

“I’d love to,” she said, smiling into the handset.

“Great. Meet us in reception in five minutes,” said Vicky then hung up.

So, they hadn’t forgotten about her. She got up, made sure Adam’s chair was exactly as he’d left it and hurried to the ladies to touch up her makeup.

Ten minutes later, she was sitting in the local café with six of the girls from her old office. They were all chatting and laughing at once, sharing office gossip and teasing Stacey about fancying one of the guys from IT Support. It was just like old times, she’d missed this camaraderie.

After they had all ordered their food, Bianca, the girl who had taken over her old job, had a moan about Joe being so untidy. Rachel smiled to herself as she listened. Joe was the pole opposite of Adam.

“So, Rach,” said Vicky, as the waitress brought their food. “How come Mr Stone hasn’t fired you yet?”

Rachel laughed. “Oh thanks. I’m not that bad.”

All the girls raised their eyebrows, and Rachel grinned, enjoying their good-natured ribbing.

“What’s he like, then?” asked Bridget, one of the admin assistants, with wide eyes. “Is he really as bad as they say?”

“Oh, worse,” replied Rachel, her face deadpan. “Much worse. If I make a mistake he puts me over his knee and spanks me.”

The girls erupted into fits of giggles at Rachel’s ‘joke’ and waited for her to continue. Rachel shrugged. “There’s not really much to tell, to be honest. He’s demanding, but fair. The fact I still have a job is testament to that.”

“Well, rather you than me,” said Vicky, dipping a chip in a big splodge of ketchup. “He may be gorgeous, but he looks like he might eat you alive.”

Rachel giggled. “Oh, yes. He does that as well.” If only they knew.

Stacey coughed to get everyone’s attention then lowered her voice. “I’ve heard he’s into weird things. You know, kinky stuff.”

The girls all laughed and told her not to be so ridiculous, but Stacey was adamant. “No, really. Apparently he owns some dodgy club or something. My mate’s sister went out with a guy who’d been there. It’s full of whips and chains and stuff.”

All six heads turned to look at Rachel, and she couldn’t help the blush that rose from her neck and crept into her cheeks.

“Well, Rach?” asked Bridget. “Do you know anything about that?”

Rachel decided to play dumb. “For God’s sake,” she said, grinning, “I’m only his bloody PA. How would I know what he gets up to in private?” She knew he wasn’t too bothered about keeping Boundaries a secret. After all, it was hardly illegal. But she wasn’t about to confirm or deny anything, so she kept quiet.

I knew when I started reading this series that Katy Swann was going to be a good writer. She really has a way of telling a great story with great characters. Now while all titles can...

Share what you thought about To Love and Obey and earn reward points.