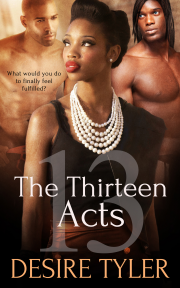 How far would you go to find sexual satisfaction? What would you do to feel fulfilled?

You are successful, wealthy, the envy of everyone you know. You seem to have it all. Except sexual satisfaction. What would you do to feel finally satisfied and gain control in the one part of your life in which you have none? Would you trust your innermost desires to two men you barely know? Would you allow them to take you to your breaking point of complete passion and sexual fulfillment? Would you allow them to introduce you to the Thirteen Acts?

It was an unusually foggy night as I drove to the mansion. My heart raced so fast I was certain I would have a heart attack. My stomach knotted tighter the closer I got to my unknown destination. The annoyingly robotic voice from my GPS was the only sound inside the car, the only company I had while I drove miles outside my comfort zone of the city. I was so anxious it was hard to drive the speed limit.

I kept obsessively glancing to the clock on the dashboard every few seconds. Right on time. No surprise there. I was always prompt—no, that was a lie. I was always embarrassingly early to everything.

Turning off the freeway, I continued to drive to what felt like the middle of nowhere. The mansions, growing more and more grandiose, seemed to be spread miles apart from one another. This made me grow even more nervous as I wondered where my best friend was sending me. It looked like the type of place where no one could hear me scream.

This is the part in the horror movie where my car breaks down and I’m ripped apart by some maniac with a chainsaw and ridiculous-looking mask. Black women never last long in horror movies. I rolled my eyes at that ridiculous thought.

Surprisingly, a sense of relief washed over me when my GPS said I had finally arrived at my destination. Maybe it was because I had started to grow a little anxious, worrying this whole thing was some kind of elaborate set-up, a huge goof that was part of one of those hidden camera or prank reality shows I absolutely despised. Finally arriving at the mansion brought a sense of calm that this whole crazy adventure I was planning to embark on was real and I wasn’t crazy for doing this. I had always been the type of person who needed to see or feel something to accept that it was. Even with my business, I never believed that we were doing well until I saw and held the financial reports in my hands. Seeing the mansion appealed to that control freak and I let out the breath I didn’t even know I had been holding until my shoulders fell heavily back into place as my heart started beating at a normal pace again—well, as normal a pace as could be expected given what I was about to do.

This mansion was the grandest of all I had passed. I was used to wealth and it was hard to impress me, but this place did. It sat far back on the property and every light was on, seeming to show off its splendor to passing motorists, forcing them to slow down and gaze upon its many ornate windows. To me it seemed to tease the people unlucky enough to drive by who could only dream of living in a place such as this.

Several other cars were parked in the circular drive. I wondered if they all belonged to the owner or if there were other guests besides me.

I took several deep breaths to calm myself before getting out of my car. I wanted to appear cool and put together in front of them. I was a firm believer in that old phrase, ‘Never let ’em see you sweat.’

My heels click-clacked against the gravel as I made my way closer to the large front door. Aside from the steady chirping of crickets, that was the only sound. It was almost eerie and really did remind me of something out of one of those bad Hollywood teen slasher movies and I had to shake my head several times to rid myself of the macabre thoughts and goosebumps that had sprouted on my arms despite the pleasantly warm night.

Taking one last deep breath, I rang the doorbell. This is it. No going back. The point of no return. I looked around as I waited for someone to answer. It was the perfect night for something like this. The fog had grown heavier and was playing a game of peek-a-boo with the tiny sliver of the moon. I could barely make out a few twinkling stars and a warm breeze gently blew, caressing my skin almost as if preparing me for what was about to come.

The door opened and I was greeted by one of the sexiest men I had ever seen. He was tall with dark honey eyes that perfectly complemented his light caramel-colored skin and full lips that looked perfect for kissing. He had a trendy haircut that I bet cost close to three figures. He probably went to one of those fancy salons that have months-long waitlists, the articles and covers of all the magazines they’ve been featured in framed on the walls, and serve never-ending champagne to their clients.

His clothes were nice and casual, though I recognized the slacks and tight-fitting polo as designer. I would have bet everything I had that even his socks and underwear were designer. Brother had money. Lots of it. I could smell it coming off him and he wanted everybody to know it. Not that I blamed him. I was the same way. I guess us lucky few who were obnoxiously wealthy were always insecure about our self-worth and constantly needed to flaunt the fact that we could own the world if we wanted.

He knew that I knew it too. I could tell from the almost childish sparkle in his eyes and for some reason that made my heart race a bit faster and my stomach knot as if I were on a roller coaster that had just taken that first straight plunge after the long climb up the first steep hill.

“I’m Tish’s friend,” I said, grateful that my voice didn’t quaver but then I’d had years of practice keeping a cool demeanor despite being a bundle of nerves. “She said you were expecting me. That you could help me the way you helped her.”

“You’re pretty,” he answered, looking me up and down several times. “Damn pretty. I’m surprised a woman as fine as you needs to come here.”

“I guess even us fine, pretty women can get stuck in a rut,” I playfully flirted. I liked him already. He was smooth as butter, a confidence that just bordered on cocky but never quite crossed that line. An incredibly sexy quality in a man that I had always admired and always made me weak in the knees and wet in the pussy.

“I guess.” He smirked. His voice was silky smooth and had a nice lilt to it. I wondered if it was natural or something he had worked hard on and perfected over the years.

He led me inside, which was grander than the outside—marble, gold, crystals, chandeliers, columns, ornate rugs, antiques everywhere. I was amazed that I didn’t let out an impressed whistle. This house would make the wealthy kings of the Middle East and Egypt jealous. All of this stuff must have cost more than the damn house! Brother was beyond loaded. I wondered if it was just him who lived here or if other occupants were hidden away deep inside the mansion’s abyss. 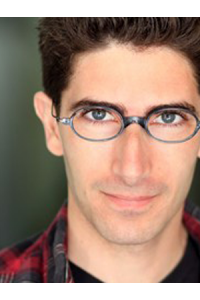 As a writer, Desire Tyler has been nominated for both a LAMBDA and CAPA Award and has published over sixty short stories and seven novels.

Share what you thought about The Thirteen Acts and earn reward points.