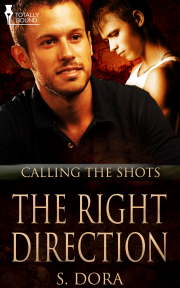 Book 2 in the Calling the Shots series

Now he's admitted to his lover, Tom—and more importantly, to himself— that he's willing to explore his Dominant side, Isaac prepares for a weekend during which both he and Tom will stay in their roles as Dominant and submissive. Isaac has a great time selecting the flogger, paddle and cane he's planning to use.

During their special weekend, Isaac and Tom not only have lots of kinky sex, they also explore D/s outside the bedroom. They are not ready, however, to share this part of their relationship with the outside world.

How will Isaac react when an innocent moment of misunderstanding confronts him with everyday reality?

Isaac sighed as he scrolled through the webpage filled with BDSM toys, although he wasn't sure if 'toys' was an adequate description for the rich assortment of floggers, paddles, whips and canes. And what should he think about the nipple clamps and cock cages? He had read that certain objects had a bark worse than their bite, but also that with others he could potentially hurt his sub, in a way that should never happen in any loving and healthy relationship. That was still all theory, because he had not yet wielded a paddle and waited for Tom's reaction. He knew the effect his bare hand could have, and he loved that effect almost more than he was willing to admit, even now. For the first time, he was planning a play session in which he would introduce his submissive, and thus himself, to BDSM paraphernalia beyond their trusted handcuffs. He had stopped fooling himself about the nature of his feelings not much more than a month ago. He wanted to be the Dominant to Tom's submissive. Truth be told, much of the vanilla sex they'd had over the course of their two—year relationship had already been on the rough side. Now both he and his lover called it by its true name, and were ready to explore the more extreme boundaries of their love. Isaac put several items into the virtual shopping basket and clicked on the 'continue shopping' button to see if there was anything else that might trigger his interest. He really liked a few of the collars on offer. He had already bought a simple leather collar as a first gift, but that one wouldn't be sufficient in the long run. There would come a time when he wanted to claim Tom symbolically as his own, to state his ownership as a Dominant and Master. They'd both have to earn that moment. They had to recognise it for what it was instead of what they wished it could be. Isaac knew they still had much to learn, even though Tom, in his youthful enthusiasm, might think he had already reached the next step. They were a good couple, though Isaac had doubted a serious relationship with a lover eighteen years younger would be such a great idea. Tom, being Tom, had refused to listen to Isaac's objections, and one night of sex had resulted in two years of more happiness than Isaac had ever believed to be possible. And a few weeks ago they had embarked on yet another journey. Their already extremely satisfying and far from tame sex life had taken on a new dimension. Isaac thought being the Dominant in a BDSM relationship was equally scary and exciting, but there was no one he wanted to wear his collar and kneel at his feet other than Tom. To Isaac, it wasn't just about spicing up sex with some mundane adult toys and a bit of spanking. He wanted to bring his lover, his sub, to a state of mind and a place Tom had never been before. He also wanted to bring himself to a point where he would truly be the Dominant, the Master. No matter how new he was to all this, that much he already knew. He wanted... To see Tom kneeling between his widespread thighs, worshiping his Sir's cock with lips and tongue, while Isaac browsed through the adult website. They already owned a nice collection of restraints, butt plugs, cock rings, vibrators and anal beads, but there was definitely room for more. Thus far, Tom had chosen and bought everything, but, as a self—confessed Dominant, it was high time for Isaac to do some shopping of his own. Tom hadn't been home since early that morning because he'd had a rather intensive day of lectures at university. After that, he would have gone to the pub with a couple of his friends, doubtless to talk about writing their first novels. Isaac tried to keep some distance from that part of his lover's life. Not because of a lack of interest, but because a man in his early twenties had a right to his own friends and interests, just as Isaac didn't expect Tom to accompany him on visits to his friends, most of whom were old enough to be Tom's parents. They both had friends over for dinner from time to time, but that was about it. Oh, yes, he would love it if Tom got on his knees as soon as he came home and gave Isaac one of his quick and effective five—minute blow jobs. Isaac was all too aware that his cock was filling in reaction to the mental stimulus, but he ignored it as best he could and concentrated on the items on the screen. A man could easily spend a small fortune on whips and paddles, especially when he imagined how his sub would groan in pleasure—pain while trying to keep count of the lashes for his Sir. He was all too aware he'd gone more than a little over his self-assigned budget when he finally hit the 'buy' button and got his credit card out, but once in a while he should be allowed to spoil his lover.
Buy Now

S. Dora has yet another enticing entry into the “Calling the Shots” series.

Isaac has admitted he enjoys his Dominant side, while Tom continues to embrace his submissi...

It is quite enjoyable to watch Tom and Isaac’s kinky relationship grow as they learn each other’s needs and wants.  Tom continues to struggle with topping from the bottom and asking questions...

Share what you thought about The Right Direction and earn reward points.