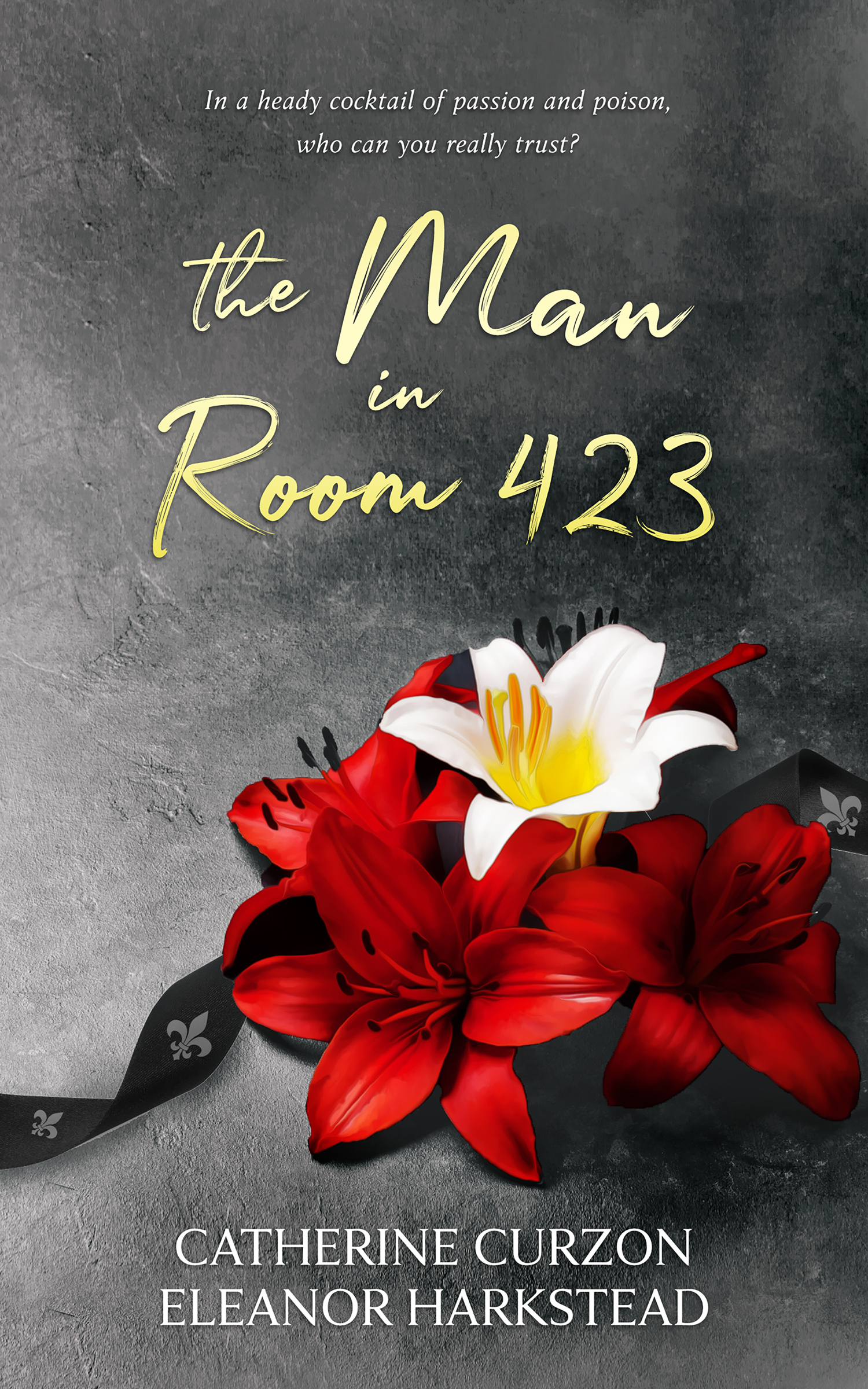 In a heady cocktail of passion and poison, who can you really trust?

When Lizzie Aspinall and her sister meet for cocktails in a high-rise bar, the last thing she’s expecting is to spend the night in the arms of the nameless man in room 423. As a one-night stand with a stranger turns into a steamy affair with a dedicated detective, Lizzie finds herself in the sights of a stalker.

Ben Finneran has spent ten years pursuing a ruthless serial killer who poisons victims at random before disappearing into the shadows. He wants to believe that the attraction he and Lizzie share is just physical, but when they find themselves falling for each other, is Ben unwittingly leading a murderer straight to her door?

Pursued by the past and threatened by the present, who can Lizzie and Ben really trust?

Reader advisory: This book contains scenes of violence, murder and attempted murder. There is a scene of public sex, and scenes involving gaslighting and references to a past emotionally abusive relationship.

Lizzie saw him in the light of his uncurtained hotel window. He leant one hand casually against the pane, looking back at her across the dark December street.
She watched him over the rim of her glass. Office Christmas parties were loud in the bar around her, but she was barely aware of them. All she could see was the man at the window, immaculate in a dark-coloured suit, the white of his shirt as crisp as frost.
“Earth to Lizzie. Come in, Lizzie!” Long, coral pink acrylic nails snapped in front of her eyes and Donna set down two glasses of a bright red cocktail, a cherry bobbing on the surface like a drowning man. “You need a crowbar to get served in here tonight!”
She wasn’t going to tell Donna about the man in the window. She wanted him for herself, so that she could pass through what remained of this evening with her sister in the knowledge that she and she alone had seen him.
And that he had seen her.
The interested glance of a stranger.
“What on earth sort of cocktail is that?” Lizzie attempted a grin. She put it to her mouth to taste it and exaggerated her recoil. “Gosh, that’s strong!”
She allowed herself a quick look. He was still there. He was still watching.
He might even be smiling.
“Aaaand still nothing from Matt.” Donna’s frosted pink lips turned down into a frown as she stared at the phone she held. She sighed and threw it down on the table, sending it skidding into a puddle of someone else’s spilled beer. “He finished training hours ago, where is he?”
“Maybe he’s busy? You did insist on marrying a footballer.”
“You did insist,” Donna mimicked her sister, a petulant child once more. “And he’s not playing tonight, he’s not training tonight, he’s not here tonight. So where is my Matt? There’re some strange people out there, Lizzie, and he doesn’t look out for himself sometimes!”

“I’m sure he’s okay. Maybe he’s drinking with the squad. Lads’ night out. Or maybe he’s at his mum’s, eating beans on toast!”
“I hope so.” Donna shook her head and swirled the cocktail glass by its stem. “We’ve had to get the police involved, you know. He’s had some horrible messages sent to the club, really nasty stuff. They’ve said not to worry, but… Well, I love him. I don’t like to think of someone being out to get him.”
Lizzie reached across the table and gave her sister’s hand a reassuring squeeze.
“That’s terrible, Donna! But you’ve done the right thing, going to the police. It’ll be okay.”
Would it be? But her sister had chosen this existence, had sought it out, pursued it and embraced it.
“That’s celebrity life, Don. I’ve heard similar from some of my clients. And you know what they say to me? I knew I’d made it when I got my first stalker.”
That seemed to please Donna, just a little reminder that she had won her premiership striker, that she was the closest Manchester came to royalty. Donna beamed a bright smile and patted her poker-straight blonde hair into place, though it was immaculate already. “I always said I’d be a WAG, didn’t I? When you were stitching dresses for your dolls, I was dreaming about my footballers! A girl’s got to have ambition, after all.”
“Mine was to run my own business and be my own boss.” Lizzie smiled. “And I am.”
She took a sip of her cocktail, punctuating her comment, then pushed the glass away. It tasted like medicine.
Her sister just laughed in response and glanced around, her attention caught by a group of loud, tanned, gym-honed young men by the bar. As if by habit, her eyelids fluttered and she dropped her gaze, forming her lips into a perfect selfie-pout. Donna de Luca was confident in her glamour in a way that Lizzie had never quite been.
Lizzie propped her elbow on the table and peered outside again. He was still there. Had he watched her, even as she’d looked away at her sister?
Never breaking his glance, he slowly unbuttoned his jacket and flung it in one smooth movement onto a chair. His hands were at his throat, and seconds later, a tie went after the jacket. And now he was attending to the cuffs of his shirt. Although a street and several floors divided them, Lizzie was sure that he must have been wearing cufflinks. They went into his pocket.
She swallowed, her free hand toying with the beads of her wooden necklace.
He was unbuttoning his shirt, from the neck down. Then it was off. But on the floor this time, at his feet.
He pressed both palms to the glass, his toned, bare torso on show for her.
For someone. Had a complete stranger really just stripped for Lizzie Aspinall? Partially, that is.
His hands drifted to his belt. Then he turned his body away, his glance lingering for just a second longer before he strolled across the room and vanished from her sight.
“Matty!” Donna snatched up her mobile as a text buzzed across the screen. She swiped her thumb from left to right on the glass and immediately started to tap out a reply, her finger moving with confidence from key to key. “Oh my God, Lizkins. He was tanning!”
“A special coat of creosote for Christmas?” Lizzie laughed. “Is he going to come to our parents’? It would’ve been our turn at Neil’s parents, but seeing as we’ve split up… I was thinking of going to our parents’, but I’m tempted to lurk about the flat by myself. Just enjoy being on my own, in my PJs, even if— Donna, are you listening?”
“Just a mo, sweets.” Donna didn’t even look up from the screen, her finger moving swiftly from letter to letter. “I can’t listen to you and text. I’ve had too many drinkies for that!”
Not for the first time, Lizzie wondered why she had agreed to come out. Because Donna had insisted, ‘because you’ve got to go out and meet people’. But Lizzie would’ve been content to stay at home. Even though home was makeshift, it was hers.
She looked again at the hotel room. It was empty.
Minutes passed, then from the corner of Lizzie’s eye, there was movement. The man was back in the window.
Donna was still intent on her phone. Lizzie placed a hand to the side of her face, as if she were merely relaxing, but instead, she was staring.
The man was wearing nothing but a towel.
Neat and white, it was tucked in at his waist and hung to just below his knees. He ran a hand through his dark hair and slowly shook his head from side to side. Even from where she was, Lizzie could see the water droplets fly away. He resumed his pose, leaning with one hand on the glass. Leaning and looking across the street at Lizzie.
Who does he see when he looks at me?

Share what you thought about The Man in Room 423 PRINT and earn reward points.