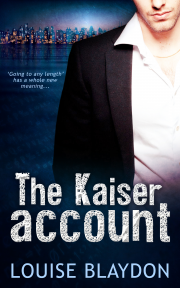 The life of an ad man in 1960s New York is all about risk-taking, but not until Evan Jones meets the man from Kaiser, Mark O’Brien, does he fully understand what that means…

It’s 1965. Evan Jones is an account manager for a major advertising company in New York City, engaged to the boss’s daughter in a halfhearted sort of way, gradually making his way up into the highest ranks of the company, and into the boss’s favor. The Kaiser Motors account is one they’ve been angling at for years, and Evan has absolutely no intention of letting it slip through his fingers.

But the man from Kaiser, Mark O’Brien, is not what Evan is used to dealing with and, moreover, is someone who hits him right where it hurts—in the long-repressed part of him that prefers men and is ashamed to admit it. When it comes to O’Brien, ‘going to any length’ has a whole new meaning, because O’Brien wants Evan—and worse still, Evan wants him back. O’Brien, in the space of a night, shows him something more than the staid life is possible. Can Evan take the risk and close the deal?

When Evan Jones graduated high school, his father gave him a green silk tie. There was nothing particularly remarkable about it, beyond the fact that it was genuine silk and pulled nicely smooth when Evan wrapped it around his fist, but Evan liked that, its conservatism a sure shield for many sins. He liked the gesture, too—it meant something. A silk tie said ‘You’re growing up, son. You’re going to make it.’ These were things Evan had needed to hear when he was eighteen and uncertain, heading off into the great wide world of the University of Texas system. Whenever he was in doubt, the tie was there to remind him that he owed someone something, that he could manage it. The tie said, ‘Yes, you can.’

Over the years, the unremarkable tie acquired its own special significance. Evan wore it when he needed to feel that reassurance tight under his collar, whenever he was gunning for something important. He wore it for midterms, for the finals he aced, for the interview that won him his entry-level position at JD Hardy Advertising, and by that time its place in Evan’s professional arsenal was assured. When the tie came out, it seemed, Evan won his bids, convinced bigger and better clients with his sales pitches and, consequently, was set in pursuit of increasingly blue-chip accounts. Evan’s tie meant business, and Evan always made sure to wear it whenever he did.

Louise Blaydon is a writer and academic. She writes mainly in the romance genre, specialising in gay fiction. She has also been known to write the occasional poem or two, but mainly sticks to novels and short stories.

Louise's first novel, Summer Song, was the first-place winner of a Rainbow Award in 2011. She has subsequently published two more full length novels, a couple of novellas, and many short stories in various anthologies.

Louise lives in England and likes rain and cats.

I loved this book... Ms Blaydon wrote well and I wanted to know what would happen next. I raced through this story... If you want a book with heat and intrigue, but will work when you don’t have...