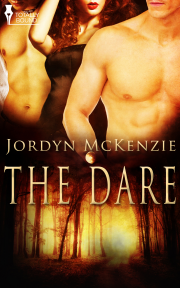 "Don't think. Just feel." How a moment's decision in a silly game with two of her closest friends changes Alexis' life, and her heart, forever.

It's the final night of a weekend camping trip with a group of childhood friends. They are recent college grads, about to move forward to the next stages of their lives. It's a time for reflection, a time for anticipating what the future will bring. What better way to end that chapter of youth and revelry, before scattering into the winds of adulthood, than with one last weekend spent with your closest friends?

But for Alexis, the events of that final evening cause her world to veer in an unexpected direction. What should have been a harmless game of Truth or Dare with her seemingly platonic pals, Damien and Parker, leads to an experience unlike any she has ever had before. The lines of friendship blurred and dormant desires awakened, Alexis faces a dare that will change her life forever. Torn between feeling shame and utter gratification, she must now decide whether to be led by her conscience or her heart.

Publisher's Note: This story has been previously released as part of the All Together Now anthology by Totally Bound Publishing.

I sat staring into the fading orange-to-blue flames as they glowed from the remnants of a massive campfire. It was the final evening of what had been one of the most fun weekends I'd ever had with my closest circle of friends. Having just graduated from college, we were all heading into that dreadfully long phase of life called adulthood. I myself was the proud owner of a bachelor's degree in science and was preparing to start my first job in a medical laboratory in three weeks.

Planned as a celebration, a last hurrah before we all officially became grown-ups, the weekend had been spent hiking the trails and swimming the lake, with the guys unsuccessfully daring us girls to skinny-dip. We'd played and argued over various board and card games on the ageing picnic tables provided by the campground, and concluded each day in drunken revelry round the campfire. Feeling tired but oddly content, I allowed myself to become lost in my thoughts, surrounded by some of the people I cared for most in this world, while they exchanged stories of what would soon be known as 'the good old days'. I was looking forward to seeing what the future held for us, what the future held for me. Well, for the most part anyway. One particular aspect of my future wasn't looking so good, and I'd spent the better part of the weekend trying to convince myself that the time had come to make a very difficult decision.

"Where's the chocolate at? I need another s'more!" Mark's sudden and loud announcement jarred me from my deep thoughts. He stood up and walked over to the picnic table, knocking over unoccupied fold-up camp chairs and spilling beers in the process. I couldn't help but laugh at the wake of destruction my Hulkish friend had left in his quest for more chocolate.

"Dude! Watch where you're going!" Damien protested, jumping to his feet after his leg was soaked with beer. "These were the only dry jeans I had left here. Damn!"

"Not anymore." I smirked at him, and he replied with a middle finger. I waved my metal hot dog roaster at Mark. "Hey, Mac-daddy, will you hook me up with a couple more marshmallows?"

He grinned at my years-old nickname for him and brought over the bag, plopping down in the chair next to me. "Anything for you, Sexy Lexi."

"You two are twenty-two years old, how much longer are you going to call each other those dumb fucking names?" groaned Natalie, Mark’s girlfriend. Scowling, she stretched her long legs to bring her feet closer to the fire. Though she and Mark were very much an item now and had been for nearly two years, she hated the fact that for four months in eighth grade, Mark and I had been together. We’d broken up, become the best of friends, and, to her chagrin, the pet names Mark and I had called each other through our short-lived romantic relationship had stuck throughout our mostly platonic one.

By day, she works a 9-ish-to-5-ish desk job. When night falls, and the house is quiet and calm, she puts pencil to paper, fingers to keyboard, and hoists her Freak Flag as high as it will go.

Having dabbled in writing since her t'weens, a recently realised knack for telling a titillating tale spurred Jordyn's decision to share her talent with the world. Strong, sassy women, roughneck men, and snarky dialogue are Jordyn's specialty. Her number one goal ? to entertain YOU, dear reader.

Jordyn enjoys good wine, better whisky, and the occasional belly laugh with her best friends; not necessarily in that order, but even better when they're all combined.

The trio melted and melded as a passionate team in defiance of all naysayers. If you like your three way action with a great deal of heat and underlying feelings exploding all over, this will certainly...

Share what you thought about The Dare and earn reward points.