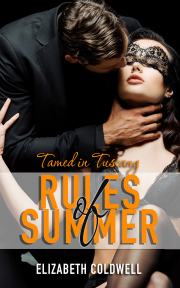 The retreat is her chance to learn something new, but instead it brings her old Master back into her life…

The retreat is a fresh start for me—at least, that’s what my boss tells me. I’m not enough of a team player for his liking, and this is my chance to learn all the soft skills I’ll need—get creative and do some networking. Time to relax, unwind and forget about everything in the beautiful Tuscan countryside. Until Kelvin walks into the villa.

No one knows how to master me like Kelvin Lim. His touch, his words—they ignite something within me, and my submissive body yearns for him. But he walked away without a good reason eight years ago, and though I really thought I was over him, the sight of him tells me otherwise. Kelvin says we’re bound by the red thread of destiny and what joins us together can never break. He wants us to pick up where we left off, to play the kinkiest of games that will test my limits and tame my wild heart. But at the end of the retreat he’ll be going back to New York, leaving me behind for a second time. As much as I want him, can I risk the pain of bending to his will all over again?

Jim Franklin paused and glanced around the boardroom, building up the tension as if this were one of those cheesy Saturday night talent contests and he was about to let us know who’d won the star prize. Sick anticipation churned in my belly and I wanted to yell at him to get on with it. After all, I’d been waiting until he got back from a conference in Las Vegas to learn whether I’d finally clinched the promotion I’d worked so hard toward. But his company, his rules I supposed, and if he wanted to milk the moment I didn’t have much choice but to let him.

Whether you’ve clinched it, I inwardly chided myself. You know the job is yours. You’ve put in the hours, you’ve laughed at Jim’s ‘dad jokes’ and pandered to his ego enough times. No one else on the team has the experience or the contacts you’ve cultivated. Not Ruby, not Anil and certainly not Bran—

“Brandon Porter. Well done on making it to the top table, Brandon.”

The round of applause following Jim’s words was swift and brutal as gunfire, shooting down my dreams. I plastered on a smile, not wanting anyone to know how much it killed me to see Brandon being congratulated with backslaps and hearty laughter, taking the acclaim that should have been mine. When Brandon came up to me, arms outstretched, floppy red hair tousled and the end of his tie slung casually back over his shoulder, I had no choice but to let him enfold me in a hug.

“Hard luck, Iz,” he murmured. “For a long time I really thought you were a shoo-in for the role, but I guess the best man won in the end.”

“I’m sure you’ll do a great job, and if you need my input you know where I am.” Fake sincerity flooded my tone.

“Yeah, still out on the main floor, while I’m moving into the sweet corner office with the view over the City.”

Brandon wandered off to talk to Helen, the HR manager, leaving me fuming at his smug air of superiority. He’d joined the firm barely nine months ago and already he’d moved up to the top level of management, whereas I’d been here for the best part of five years and yet I’d been passed over for promotion again. Judging the time to be right to make my exit from the gathering, and wondering whether I should polish up my CV and start looking for a new position, I had my hand on the door handle when Jim called my name.

He shook his head. “This will only take a minute. I wanted to say…I’m sure you must be disappointed, but in the end we felt Brandon was simply a better fit for the direction the company intends to take over the next twelve months.”

“How…?” What does he have that I don’t? I wanted to ask. Look at him, all smarm and unearned confidence, treating everyone here like he’s their best friend when I know damn well he mocks most of them behind their back.

Jim shot me a benevolent look, like a father regarding his favorite child. I knew it well— his way of softening harsh words. “You have to understand, Brandon is…well, he’s seen as more of a team player. He has a willingness to get involved for the company. I mean, in the last couple of months alone, he’s represented us in the Canary Wharf Charity 5K and helped organize a donation of winter coats for the homeless. Whereas the perception is that you’re—how can I put this?—a little aloof. Unfriendly, even. And you’re not the best at taking a direct order.”

“Yeah, I get it. I don’t play well with the other children.” Even though I tried to joke about it, Jim’s assessment of me stung. Not least because there was more than a grain of truth in what he said. But I had my reasons for not getting too close to any of my coworkers. Reasons I would never share with Jim. “Is this your roundabout way of telling me my future lies outside Franklin and Oakley?”

“Not at all.” He took a step back, as if offended by my suggestion. “Please don’t think you’re not a valuable member of this company. Hell, Isabel, the marketing department would fall apart without you. I simply think you need to take a few days off, away from the distractions of the office. I always find it’s a useful way of gaining perspective on a situation. Tell me, when was the last time you went on holiday?”

“Well, I—” I wracked my brain and came up blank. There’d been the girls’ spa weekend in Bath with Juliet when she’d turned thirty, but that was—I couldn’t even think how long ago. The Christmas before last?

“Exactly. Which is why I want you to go here.” He pulled a glossy brochure from the folder he held under his arm and gave me a few moments to study it.

“The Ideas Partnership?” I glanced from the first page to Jim and back. “A creative and collaborative retreat in Tuscany? I thought you meant you wanted me to go and chill on a beach somewhere. Come on, Jim, this doesn’t sound like me at all.”

“Read on. It’ll make perfect sense, I promise you.”

I leafed through the brochure, aware of Jim’s keen gaze on me. The Ideas Partnership described itself as a physical space for like-minded professionals to come together and work on joint projects and problem-solving. So far, so much New Age jargon. I turned the pages and got deeper into the details of the program. Creative and storytelling sessions, and something called ‘self-reflection sessions.’ I half expected the words ‘synergy’ and ‘momtrepreneur’ to make an appearance. Still, the pictures of the venue for the retreat looked appealing—a quaint, white-walled villa on the outskirts of a village not too far from Pisa. I’d always wanted to visit Italy, though I’d had visions of a shopping trip to the high-end boutiques of Milan or strolling down the Spanish Steps in Rome.

“The next retreat begins on Thursday. I want you to be on it.” Jim’s tone brooked no argument.

“But don’t these things book out months in advance? I mean, it says here there are only five places available.”

“Don’t worry about it. Monica, the organizer, is a good friend of mine. She let me know someone’s had to drop out unexpectedly, so there’s no problem there. Really, you’ll be doing her a favor. And she’s so looking forward to meeting you. I’ve told her lots of good things about you.”

What, all the things you couldn’t tell the board when it came to choosing the head of marketing?

“I don’t know about this. We’re right in the middle of planning the new viral ad campaign, and—”

“Isabel, we can keep the campaign on track without you, I promise. Speak to Amanda and she’ll book you on a flight to Pisa. Don’t forget to pack your sunscreen—you’ll need it. And try to forget about everything. I want you to come back relaxed, refreshed and inspired. You can do that for me, can’t you?”

I nodded, not sure what to say. Just as with the promotion, Jim had left me feeling lost and outmaneuvered. He claimed he had my best interests at heart, and I supposed I’d have to trust him. Maybe a few days of self-reflection, creative discovery and whatever other nonsense the brochure promised couldn’t hurt.

Share what you thought about Tamed in Tuscany and earn reward points.