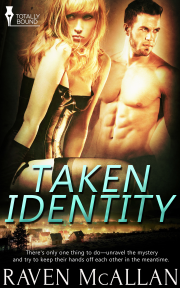 If someone steals your identity and marries a sex god and that sex god husband shows up at your door…do you get to keep him?

Jules has no memory of marrying a sex god—and no woman is that forgetful.

So when the devastatingly handsome Gray turned up on her doorstep looking for his wife and calling said wife by Jules’ name, Jules wondered briefly if she’d landed in an alternative universe. She knows she’s not his wife and so does he, but apparently someone with her name and history is. Is it a case of coincidence or did his missing wife ‘borrow’ Jules’ life?

Even though the dominant Gray sends her knickers aflame with just one look, with a missing wife in the equation, Jules knows there’s no chance of finding out what else he could achieve.

There’s only one thing to do—unravel the mystery and try to keep their hands off each other in the meantime. The first may well prove far easier than the latter.

“Is this the residence of Julia Frayne?”

Whoever said a tone of voice couldn’t shatter glass was wrong. Very, very, wrong. This one could, and it sent shivers down Julia’s spine. Shivers of the, ‘Oh no, this is not good,’ kind.

Julia—known to all and sundry as Jules—looked at the questioner closely. It was a pity he was a blur. She’d been about to put her contacts in when the doorbell rang, and she hadn’t stopped to pick up her specs before answering.

“So, is this the residence of Julia Frayne?” His tone was tinged with annoyance. “For goodness’ sake, woman, it’s not a trick question. A simple yes or no will suffice.”

He—she assumed it was a he by the deep voice—was distinctly hazy, although from what she could see, there was a tall, drop-dead gorgeous man on her doorstep. Her body tingled. “Why?” she asked. She hated the defensive tone in her voice, but she had no idea who her questioner was, and she was too wary of all the horror stories around to give out information freely. “Who wants to know?”

He stared at her and didn’t answer. That made Jules grit her teeth. If there was one thing guaranteed to get her riled, it was an arrogant, up his own ass man, who ignored something so important as a question like that. Information was a two-way street. She groped around on the shelf by the front door and took hold of her rape alarm. When you lived out in the country, it paid to be careful.

And who didn’t always remember to put the chain on, eh?

Next to it was a spray bottle of water then one of deodorant. A step-by-step disable kit, as Miss McMurty, her next-door neighbor said, just in case. Miss M didn’t specify what case she had in mind, but as she loved Miss M, Jules made sure her homemade alarm kit was always handy. Now she might be glad of it.

“Please tell Ms. Frayne I wish to speak with her.” He invested the Ms. with all the disdain his patrician voice could enunciate.

Jules waited, but he obviously wasn’t going to expand his stark statement. What was it with tall, dark men trying to be macho? Okay, she admitted he didn’t need to try very hard. Over six feet of what seemed—even to her un-lensed eyes—to be perfectly proportioned male, whose short, dark hair showed just a hint of curl. And those eyes, oh, those eyes. She’d bet they were deep, dark and what Miss M would call enigmatic, they screamed macho without any effort. It still made her want to stamp on his toe to see if he squealed.

Jules swallowed. He was every woman’s fantasy—or nightmare—depending on how you looked at it.

She didn’t want to look at it—or him—and either way, until she put her contacts in, there wasn’t much chance of that happening. Her stomach did a flip and her skin crawled in a positively uncomfortable manner. All her instincts were screaming trouble as loud as possible.

She could feel his impatience. It hit her like a winter wind. Cold and unfriendly, it bombarded her with slivers of icy annoyance and a shiver ran down her spine. Jules reckoned she’d better tell him what he wanted and use her ‘knee him in the balls and slam the door shut’ technique if he didn’t like her answer.

“Well, Mr. Reynard.” She spoke in a brisk fashion, as she did her best to emulate his tone and pace and show none of the tension he invoked in her. Unfortunately—and no doubt he’d see it as a weakness—she had to squint slightly to bring him into focus. It wouldn’t be a pretty look. She’d taken enough selfies sans glasses or contacts to know that. She peered at him closely to bring him into focus. “So, how may I help you?”

Even without twenty-twenty vision, Jules was now close enough to see and decide the glance he gave her was along the lines of one you might give a not very bright child. She gritted her teeth, determined to show nothing of how she felt. Which was like a particularly unpleasant bug under a microscope.

“Well?” she prompted him in as pleasant a voice as she could manage. When she’d gone to answer the door, Jules hadn’t had time to put her shoes on and the old stone floor of the cottage’s hallway wasn’t warm. It would have been oh so easy to shiver, except she thought it would project a wrong image. She was not scared. Allegedly.

“I wish to speak to Julia Frayne.”

Sheesh, is he a robot or something? Stuck on one sentence? “You are speaking to Julia Frayne. Oh, for fuck’s sake, hold on a sec.” She remembered her old glasses, the ones she wore for gardening, were in her jacket pocket and if she stretched out, she should be able to reach them.

She managed and shoved them on her nose. All her suppositions were correct. A tall, dark, dangerous, sex-on-legs specimen of manhood was filling her doorway. A very pissed off one.

The expression on his face would have frozen molten lava. Even more now, she wished she was wearing fuzzy slippers and a warm jumper. The look as well as the nip in the air didn’t make her feel comfortable in her thin, strappy vest and long, floaty skirt. Julia risked a brief glance downward and groaned inwardly. Just as she thought, her nipples had responded to the chilly atmosphere and pushed at the silky material covering them. Even though she was getting mighty sick of the guy, one of Miss McMurty’s expressions floated into her brain and she gave a stifled laugh. Sticking out like hat pegs, lovey. She crossed her arms over her chest and ignored the fact she was annoyed that her action looked defensive.

“You think something I’ve said is funny?” he asked with a frown on his face. “I beg to differ. This is no laughing matter. Impersonating someone—or purporting not to know what I’m referring to—isn’t something to smirk about. You are not Julia Frayne. And neither are you pregnant.”

Jules knew her jaw dropped, and she stood and stared at him, mouth open. At last, she found her voice.

“Half correct,” she said, pleased her tone was almost as frosty as his. “I can assure you, I am most certainly the former, and have been for close to thirty years. Equally, I am certain I am not the latter.”

For goodness sake, she thought in disgust, I sound like his clone with a stick up my ass. Very proper!

The challenging tone made the hairs on the back of her neck stand upright, and Jules lost her temper. It was a rare occurrence, but when it happened, friends and relatives knew to duck. As her parents had often said, she lived up to the red-haired virago scenario when necessary.

This was a very fast paced story focused on the mystery and suspense of Gray’s soon to be ex-wife. I found the original Jules a bit “odd” and difficult to like. Gray, on the other hand, was v...

This is a fun, read that made me smile. I do like the character of Jules she is brave, feisty, and very passionate. When you want a cute passionate story of mistaken identity this is the o...

Share what you thought about Taken Identity and earn reward points.

What if they say they are you?

What can we expect from Taken Identity?

Pre Order: £2.99
Love by the Stroke of Midnight