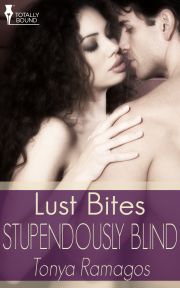 Tired of playing games, Dalia is ready to give Travis the birthday present of his life, even if they have to spend an entire romantic evening blindfolded.

Frightened of repeating the same mistakes as their parents, Dalia Kade and Travis Moby have been dancing around the magnetic attraction between them for far too long. Dalia is tired of playing games. She's ready to push past all the fears and uncertainty and claim the only man who can send her heart and hormones on a riotous ride to Orgasmville. She enlists the help of her best friend, Zoie Beagan and Zoie's new business, Stupendous Occasions, to give Travis the best birthday present of his life.

Reader Advisory: Stupendously Blind does have returning characters from Stupendously Yours, but it is written to stand alone.

Desperate times call for desperate measures. Dalia Kade’s gaze landed on the sinfully sexy smiling lips and dazzling green eyes of the man she’d lusted after for more than three and a half years. Something had to give. Tonight. She poured herself a cup of java and turned. “Today’s Travis’s birthday.” At the kitchen table, her best friend nodded. “He turned thirty-five, right?” Zoie Qwinn-Beagan pushed a breath through pursed lips as her attention flicked to the picture of Travis Moby sitting on Dalia’s countertop. “Sure doesn’t look it.” Dalia agreed. Tall, blond, and built for distraction, her former step-brother could easily pass for twenty-five. “Men suck!” She leaned against the counter and enveloped the warm porcelain cup in both hands. “They get better looking with age while we turn wrinkled and brittle, and things start to sag and drag.” “And make us look like hags.” Zoie grinned, looking nothing like the hag she professed to become in the future. With a head of fiery waves around a face of contrasting beauty, Dalia couldn’t imagine her friend ever falling prey to the ugly stick. “That’s why we snag them while we’ve still got it going on, girlfriend. We blind them by love and steaming sex so they don’t notice when old lady age catches up with us.” “Is that what you did with Nash?” Dalia didn’t think she ever saw a man more blinded by love than Lieutenant Commander Nash Beagan. She had the pleasure of watching him start the fall last Christmas at a male auction to benefit the troops. “With the help of my dear Lady Zest.” Zoie winked over the rim of her cup as she brought it to her grinning lips. Lady Zest. Zoie’s pen name for the letters she’d anonymously written to Nash while he’d been overseas. Letters she’d never let Dalia read, but confessed had been hot enough to melt the ink on the page.
Buy Now

Tonya Ramagos is a bestselling author of contemporary, fantasy, paranormal and cowboy novels. She spends most of her time in a fictional world dreaming up hot hunks and head-strong heroines. When she's not writing she's reading. Anything from legal and military non-fiction to any genre of romance can be found on her bookshelves and flash drives. Her music tastes are just as varied with artists ranging from country to rock to heavy metal loading her MP3 player. Her idea of relaxing is curled on the sofa or on her back deck with a book and a cup of coffee, glass of wine, or an MGD 64. A wife and mother of 2 fantastic boys, she enjoys playing games, dancing, and walking the nature trails around her home in Harrison, TN.

Share what you thought about Stupendously Blind and earn reward points.