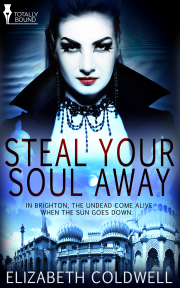 Steal Your Soul Away

Angelique is not like other burlesque dancers. For one thing, she’s been a vampire for over two hundred years. Her rule has always been ‘look but don’t touch’, until she meets hot young sculptor Tom. But she’s also attracted to his friend, Lucas, even though she knows him to be a lycan—the last creature she’d ever want to get involved with. Desire and distrust mix in an explosive combination as Angelique is drawn closer to both Tom and Lucas.

Lucas Canning has secrets he doesn’t feel comfortable sharing. Just how do you tell your closest friend that you sometimes need to shift into wolf form? And now that friend is dating a gorgeous woman vamp. Lucas is crazy about Angelique but can’t get involved with her without hurting Tom. Perhaps the night of the exhibition will give him a chance to show her he’s not the bad guy in all this and finally give his animal passion free rein. Because everything gets a little wild when the sun goes down…

This city came to life once the sun went down.

Standing in the walled rooftop garden that had persuaded her to take the apartment, Angelique looked out over the Brighton skyline. The September night retained some heat, though it did not warm her skin, and she wrapped her silk shawl a little tighter around herself. Her preternaturally sharp hearing picked up the sound of music playing and laughter in a bar a couple of streets away. In the distance, the sea was a flat, calm expanse of black.

Tempted as she was to drink in the atmosphere a little longer, work called. Mick might be among the best of the many bosses she’d had in her working life, but the one thing he didn’t tolerate was tardiness. With some reluctance, she left the garden, picked up her bag from the living room, then set off for the club.

Club Peekaboo was housed in what had once been a public house in the Lanes, a good fifteen minutes’ walk from Angelique’s apartment. Some of the other girls who danced there raised eyebrows at her willingness to travel everywhere by foot, even in the small hours of the morning or on the coldest winter nights, but she never felt afraid. Any would-be mugger who tangled with what they took to be just another slender, fragile-looking brunette would quickly discover their error.

By the time she entered the club, the evening’s show was already well under way. Walking along the corridor towards the dressing rooms, Angelique bumped into Sally, a girl no more than five feet tall, with dyed scarlet hair and an almost cartoonishly voluptuous figure, all tits and hips. Sally performed under the stage name of Dusty Kaboom. She trotted along carrying her stage outfit of a saucy little nurse’s uniform, her round bottom almost totally on display thanks to the tiny thong she wore. When she stripped out of that uniform to the strains of Robert Palmer’s version of Bad Case of Loving You, accompanied by saucy stroking motions along the shaft of an oversized thermometer, she damn near brought the house down.

Sally shook her head. “He knows you never let him down. Though I’m sure he’d allow a bit of leeway for the star of the show.” As she pushed open the dressing room door, she added, “I’m off for a drink in that new cocktail bar down by the pier later on. Meeting up with Chrissie and her new man. D’you fancy joining us after you finish here?”

“That would be nice.” She hadn’t seen Chrissie in months, not since the girl had landed a job in a vintage clothing shop in North Laine and returned to the daytime world. And Angelique had made no plans for tonight. She often liked to walk the streets till just before sunrise, luxuriating in the quiet darkness of the sleeping city.

The two women went to their usual dressing tables, Sally to change back into what she referred to as her ‘civilian clothing’, and Angelique to begin the process of turning herself into a figure of pure fantasy.

Share what you thought about Steal Your Soul Away and earn reward points.