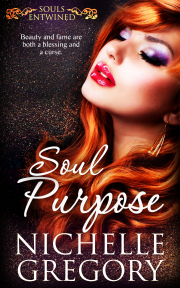 Book 4 in the Souls Entwined series

Beautiful and ambitious, Shannon Erby is nothing short of picture-perfect in front of the cameras but her personal life is anything but flawless…

Television’s darling Shannon Erby believes her beauty and fame are both a blessing and a curse. Despite personal sacrifices, Shannon’s proud of her illustrious career…almost as much as her demanding mother is. Her glitzy, high-profile job keeps her moving in all the right circles but it’s lonely at the top. She’s tired of dating, disappointed more often than not by men only interested in bedding show biz’s ‘it girl’ but attraction sparks the instant she meets Jay Dax, a handsome executive chef she’s convinced to be on her new show.

Jay Dax has wanted Shannon since their first encounter and unexpected kiss. Dedicated to his burgeoning career and the well-being of his willful sister, Jay hasn’t given his lack of time for romance a second thought until now. He can’t get enough of Shannon’s sweet and sexy nature and he’s almost certain she craves him as much he does her.

Jay stirs up a hunger in Shannon she’s never known but she goes into an emotional tailspin when she is faced with a terrifying diagnosis. She shuts Jay out, despite her feelings, determined not to involve him, especially after learning of his experience with her frightening secret.

Shannon would rather walk away from the best relationship she’s ever had to avoid burdening Jay with her struggle. She wants to believe there is more than just great sex between them, but that would mean putting the strength of their connection to the test. Does she dare trust her heart and Jay’s promise to protect it?

Shannon glanced out of the window of her limo at the bright lights of the city and the people enjoying the nightlife in Las Vegas. For the next few weeks, Sin City would be her home. Shannon opened her gold clutch and took out her compact. She checked her appearance, pleased with her smoky eye makeup. It was the perfect complement to her sequined halter cocktail dress. Shannon turned her face from side to side, smoothing back an errant ginger strand into the elegant bun she’d fashioned. She blew out a breath, admiring the way the sparkling square-cut diamond studs in her ears caught the light. “You’re bloody ready for this.”

Shannon put away her mirror, knowing she at least looked ready for the evening ahead as Clyde, her driver, opened her door. She took Clyde’s offered hand, got out of the vehicle and smiled for the flash of camera going off.

“I was instructed to bring you to the back entrance in order to avoid some fans that got wind of tonight’s party, but we didn’t avoid all of the press.”

Clyde tilted his head in her direction. “My pleasure, Ms. Erby. I hope you enjoy yourself tonight.”

Clyde grinned. “Just call me and I’ll pull the car around for you when you’re ready to go.”

“All right. Will do.” Shannon thanked him again before acknowledging the doorman waiting for her. She stepped up onto the curb, surprised by the few unexpected butterflies taking flight in her stomach.

Shannon pivoted in her stilettos, aware of both men watching her as she entered the Banner Hotel. The opulence of the building was evident even in the narrow hallway. Shannon tore her gaze off the tiered chandelier hanging over head, annoyed by the curious case of jitters threatening her normal cool. Her heels clicked on the marble floor, blending in her ears with the erratic beat of her heart. “Ridiculous.”

Shannon straightened her spine and tightened her grip on her little sequined purse, rethinking her decision to attend this gathering alone. Going to a party without a date wasn’t usually an issue for her but tonight she was nervous. This was her official debut with the cast and crew of Celeb Hotel Chef as a producer and host.

Shannon bit the inside of her lip to keep from cursing Shawn Rill. She’d been under the impression she’d be hosting the show solo when she and Shawn hadn’t been able to agree on a suitable anchor to join her. Although initially having a co-host had seemed like a great suggestion, Shannon had been secretly relived. She had never truly relished the idea of sharing the spotlight with anyone once the cameras got rolling, but Shawn had made an executive decision. He had selected Ryder Stevens as her co-host…a decision he’d left her in the dark about until this morning. “Damn him.”

Shannon would meet Ryder for the first time tonight. Despite her irritation, she understood why Shawn had given the job to Ryder. With an impressive background as a music producer, he was a rising star in television after becoming a judge for a popular talent show. Audiences loved to tune in to see what Ryder would say. He was known for his dashing good looks, his silver tongue and his family’s wealth, thanks to his father’s wise investments in several Internet start-up companies.

Shannon stifled a yawn, uncharacteristically tired as she approached the doors leading into Tempted, the hotel’s five-star restaurant. She hoped Ryder wasn’t as egotistical in person as he was on that show she’d seen him on. Like it or not, the two of them needed a good rapport once they started filming. The job, albeit a short-term gig, would be a lot easier if she didn’t have to fake chemistry for the sake of ratings.

Shannon turned her head and saw Aimee and her husband walking toward her. “Hello, you two.” She gave Aimee a quick hug then shook Kaden’s hand. “I see you were able to convince your husband to join you.”

“I didn’t have to twist his arm.” Aimee gazed up at Kaden, her love for him shining in her eyes. “We had such a blast the last time we were here. We couldn’t wait to come back for the premiere of the show. I convinced a friend to join us too.”

Shannon smiled. “How nice. Vegas is great escape from the mundane.”

“That it is.” Kaden slipped his arm around Aimee’s waist. “My wife told me she enjoys getting a chance to wear dresses she’s had stashed in the back of the closet for years and I love seeing her in them.”

“Well”—Shannon touched Aimee’s shimmering tangerine dress—“keeping this in the back of your closet should be a crime. You both look fantastic.”

“Look who’s talking.” Aimee gestured at Shannon’s attire. “You are stunning in that little number.” Aimee shook her head. “I don’t know how you walk in those stilettos.”

Shannon chuckled. “I don’t plan to do too much walking tonight. Have you two been inside already?”

“We just got here.” Kaden rubbed his stomach. “I can’t wait to sample this world-class cuisine.”

“You’re in for a treat.” Shannon’s pulse increased when she saw how crowded it was inside the fancy restaurant.

“We were trying to wait for my girlfriend but she’s taking too long.” Aimee checked her phone. “We decided to come down, grab a table and get this party started. Oh, here comes Ava now.”

“Hola, amigos.” Ava let out a tiny squeal. “It’s so nice to meet you, Ms. Erby. You rocked as host for Celeb Chef.”

“Thanks. It’s very nice to meet you too, and please, call me Shannon.” Shannon smiled warmly at Ava, admiring the way the strapless dark rose evening gown she wore hugged all her curves.

“This is so exciting!” Ava glanced around then frowned. “There are so many cameras around. How do you get used to it, Shannon?”

“After a while you forget they’re there, but it does get tiring. I live for my comfy moments at home out of the eye of the public.”

“Are we ready to go in, ladies?” Kaden gestured toward the lit entrance of Tempted.

“Oh, yeah. Let’s go in and celebrate. We’re in Vegas baby! Whoo ooo!” Ava waved her sleek black clutch as they laughed. “There are several drinks with my name written all over them.”

“Speaking of drinks”—Aimee placed her hand on Shannon’s arm as they walked—“we must share a toast to celebrate our joint efforts to make Celeb Hotel Chef a success.”

“We most definitely will.” Shannon followed them into the swanky space, scanning the well-dressed crowd. She caught sight of Shawn talking to one of the female contestants for the show and returned his wave. “I suppose I must make my rounds.”

“Right. I have a few people I need to chat with too.” Aimee giggled when Kaden squeezed her closer to his side. “Have fun. We’ll all catch up later.”

“Brilliant.” Shannon observed the lovey couple as they walked off, laughing with Ava. She liked the way the two interacted with one another.

“I see you haven’t had your first glass of champagne.”

Shannon turned to look at Shawn then smiled. “Not yet.” She reached for the flute he offered her. “Thanks.”

“You’re welcome.” Shawn took a drink from his glass as he eyed her from head to toe. “Man, that’s a helluva dress. I think you should wear it on the show.”

Shannon forced another polite grin. “I just might.” She raised her glass, tasted the bubbly drink and prayed the alcohol would quickly soothe her nerves. “So, where is my new co-host?”

“Running late.” Shawn cocked his head as he studied her. “You okay with my choice?”

It was a cursory question. Shannon was fully aware Shawn couldn’t care less what she thought about his decision to cast Ryder. “Ryder has a legion of fans, I’m sure he’ll increase viewership for Celeb Hotel Chef.”

Shawn nodded. “My thoughts exactly. Ryder’s got just the kind of energy we need.” He nodded his head to whomever approached from behind her. “Speak of the devil…”

Shannon glanced over her shoulder and saw Ryder coming toward them. He stood out, handsome and tall, and he made a striking figure in his tailored charcoal suit.

I loved the tension between them as they both struggled to stay professional on set; it was both heady and sweet somehow. Pick up this sweet and sensual kitchen romance with a dash of the eroti...

Share what you thought about Soul Purpose and earn reward points.

Other books in the Souls Entwined seriesView Series Page