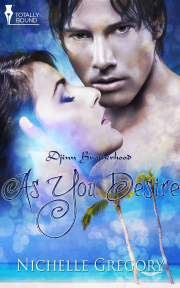 Book 2 in the Djinn Brotherhood series

Accused of being a traitor to the Djinn Brotherhood, Lona realises trying to love the wrong man has cost her everything…maybe even her freedom. Alone and pregnant, she's beginning to believe the terrible pain she's experiencing is punishment for all her wrong choices as she tries to pick up the pieces of her life.

When Rafi finds Lona suffering in agony, he makes a hasty decision and takes her home. Ignoring the mutual attraction between them, he agrees when asked to keep Lona in his charge until Rue is tracked down and the High Council can be certain of her innocence.

Rafi knows she's not guilty. He's lived with a lifetime of heartache to recognise something other than guilt is causing Lona's pain. He'll do anything to help her heal and find some peace. Their journey together might also lead to his own salvation…

Share what you thought about As You Desire and earn reward points.

Other books in the Djinn Brotherhood seriesView Series Page